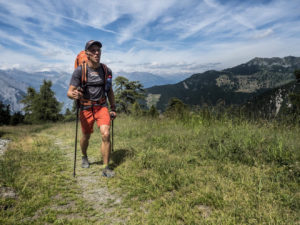 The application phase to compete in the world’s toughest adventure race is now open.

Red Bull X-Alps 2017 will be the eighth edition of the epic paratrekking race and starts on July 02, 2017. The race committee is inviting applications from adventure-proven men and women who are capable of journeying more than 1000km across rugged mountain terrain, by foot or by paraglider, nearly non-stop over a 10-day period. Applications are open from July 01 to August 31, 2016.

Red Bull X-Alps is a race of endurance and strategy; endurance because when the weather doesn’t play ball for flying, athletes continue on foot, running or power-hiking, occasionally up to 100km a day; and strategy because knowing when to take off, when to land, what valleys have which winds and how to respond to them makes Red Bull X-Alps a thinking sport.
From the start gun to the finish, it’s also a race where anything can happen. In the 2015 edition, fans watched in amazement as rookie athlete Sebastian Huber and race rockstar Paul Guschlbauer tried to chase down reigning champion Christian Maurer. They ultimately came second and third to Maurer, but the millions of fans watching Live Tracking were on the edge of their seats for days.

“The level is extremely high and is getting higher in each edition of the race,” says race director Christoph Weber. “In this race if you make a little mistake the other athletes will quickly leave you behind. Anything can happen!”

Being selected to compete in the world’s toughest and most prestigious adventure race is an achievement in itself. The race committee selects athletes from around the world who have solid mountaineering and trekking experience, endurance fitness, mental strength and proven flying ability. Anyone who meets these criteria will be considered.

Think you’re up for the challenge? Go to Red Bull X-Alps to apply.