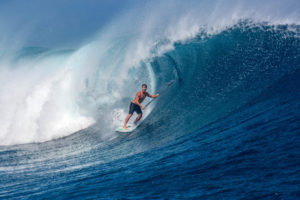 Zane Kekoa Schweitzer is singularly focused on the task at hand: Defending his gold medal in SUP surfing from the 2016 ISA World SUP and Paddleboard Championship in Cloudbreak, Fiji.

But once the tournament ends, he’s got a whole lot else on his plate. At that point he’ll go back to juggling appearances on the windsurfing world tour and the SUP world tour; he’ll continue promoting his soon-to-be released memoir Beneath the Surface, which covers his life growing up in Hawaii and his journey as a world champion windsurfer and stand-up paddler; and, last but not least, he’ll turn 24 (on September 15).

The Outdoor Journal spoke to Zane last week about the Championship, his career and some of his most inZane stories.

So where does the name “Kekoa” come from?

That’s my Hawaiian name. It literally means “the Brave,” but I guess the true meaning behind it, the name my parents intended was for “Warrior.” In the Hawaiian language, there’s usually a definition, and then the story behind the definition.

How many times have you competed at the ISA SUP World Championship now?

This is my second year competing with the ISA. And my first time to Denmark.

Yes I did. It was an amazing time. We were at Cloudbreak, Fiji, one of my favorite surf spots in the world. It was in conditions that were arguably perfect. Sometimes with surfing events, having to rely a lot on luck, you might not get great conditions. But the playing field was so fair, the waves were so consistent, the conditions were perfect. We weren’t fighting for the best wave, it was all about your wave riding ability and your talent on the water.

This year I’ll be competeing in the surfing again and also the technical course race if it’s in the wave. My expertise for the racing side is in the waves. Sometimes the ISA runs their technical course race in the flat water with just buoys, but the most exciting part of technical racing for me is when they turn into surf races, when you’re doing technical turns around buoys in the surf. It turns into much more or a surf game then. You have to manage your race board in and out of the waves. There’s this other element of nature either surprising you or working to your advantage.

You come from pretty talented and storied surfing family. Can you talk a bit about that?

I’m very fortunate and grateful to be brought up by my parents and grandparents. Feel like I’m somehwat carrying the torch for my family legacy. My parents actually met on tour for windsuring. My dad’s an 18 time world champion windsurfer, and my mother was also a national champion. They met on tour, and moved to Hawaii in their teenage years.

Before that even, my grandfather was a surfer and a sailor. He went to school and was best friends with a group of people that revolutionized the surfboard industry. My grandfather himself actually invented the sport of windsurfing in the late ‘60s—his name was Hoyle Schweitzer. He came up with the idea of the sport, and dedicated a good chunk of his life to bring it to the world. His friends growing up were the inspiration. They were all surfers: Grubby Clark, who started Clark Foam, which revolutionized the surfboard industry with a new technology of boards—used polystyrene instead of wood; Hobie Alter, who invented the Hobie Cat Sailboat; and then another friend in that same group was Tom Morey, the  inventor of the boogie board.

This passionate group of friends just wanted to create more days on the water together. So they invented stuff for every condition.

How did you get into SUP specifically? Were you a surfer first?

So I’m a surfer at heart. I don’t even remember learning how to surf. It’s part of the lifestyle in Hawaii, the beach and surfing. I would be on the front of my parents’ boards as a baby. My first ever competition was when I was three years old—also my first surfing memory, winning my first competiton when I was three.

I started too, from a young age, to be interested in many other sports. As a kid with ADHD, I was interested in a lot of different things. And so, I was also a motocross racer, and I won two regional titles in Hawaii. And I won my first World Championship title, in windsurfing, when I was 18 years old. So my first taste of being a professional athlete was actually in the sport of windsurfing. I was on the Junior world tour at 11 years old.

My Mom started to see the opportunity in stand-up paddling and creating a profession and a lifestyle with it. She realized the sport might grow really quickly, so she always advised me to try and continue growing my skill in the stand-up paddle world.

After I won that first event at Sunset Beach, I was inspired to continue competeing in SUP. Not even a year after that first win, I started to pick up some pretty cool supporters including Starboard, my number one supporter, and I found myself traveling quite a bit throughout the year, juggling the Junior Windsurfing Tour and the Stand-up World Tour, while also competing in quite a number of local surfing events in Hawaii.

So stand-up paddling has been somewhat of a newly introduced thing for me, but it’s also a new sport. I got into it through the professional side of the sport. So I was able to learn from a lot of the best guys leading the sport, because they were people from my backyard, like Laird Hamilton and people. I saw those guys doing it, and I’ve always looked up to them, and now looking back, I’m really grateful that I continued following the sport of stand-up paddle because today it’s the fastest growing watersport in the world, and I’ve been able to create not only a career, but a lifestyle out of the sport that’s been really exciting to say the least.

What’s the SUP culture like in Hawaii? Distinct compared to the famous surf culture?

So those people that are most recgonized throughouth the world for bringing SUP into the limelight are Laird Hamilton, Dave Kalama, and Robby Naish. These guys were my Dad’s really good friends growing up. They all competed together in windsurfing when they were my age.

So these guys kind of started the vibe of stand-up paddling, and I think throughout Hawaii and the world it orignally started as this way to stay busy on the water when the waves weren’t great for suring, or the wind wasn’t great for windsurfing. Was a way to stay fit and on the water, and stay prepared for when the waves did come. So I think the mentality of the stand-up paddler in my community really does have that mentality of the all-around waterman, someone who is never afraid to learn new things on the water.

You’ve traveled all over the world to SUP, surf and windsurf. France, Tahiti, Fiji, Brazil, Peru and Mexico, among other destinations. Any favorite places you’ve been?

Oh yea. I’ve traveled to around 50 countries now. I thnk my favorite places in the world, besides my home island of Maui, are probably Tahiti and New Zealand. As you can tell, I’m really proud of my Hawaiian culture. In Polynesia, I feel like it’s very similr to Hawaii. So when I’m there, I feel like I’m traveling back in time to Hawaii a hundred years ago. And the same thing with New zealand, but in a different rugged environment. So the Polynesian Islands are definitely important for me.

But I’ve also fallen in love, literally, with many places in South America. I love Mexico.

How is Denmark so far?

I’ve been able to get a really great first impression of Denmark, staying with a legendary family from the area—the Steinfaths. Really grateful to be hosted by them in my first visit to Denmark. Casper and his brother Peter have been close friends of mine for years—we travel all over the world SUPing and competing. They’ve been to Hawaii and we had great times there. And now I get to come and experience their world, and meet their community and see the environment they train in.

My first experience in the country was surreal. After 50 hours of traveling, I arrived in Copenhagen, and realized that the event location was much further away than I anticipated: about 6 hours away from Copenhagen. So I’m this Hawaiian kid sitting in Copenhagen—no transportation, no accomodation, and I wasn’t planning on crashing with Casper just that soon. So I was trying to figure out how to get from Copenhagen to Cold Hawaii with all my equipment.

I went to the train station that Casper said I should go to, they saw all my equipment and they were like ‘Hell no, you can’t get on this train.’

So then I went to SAS Airlines [Scandinavian Airlines], and started talking with the girl behind the desk. Her colleague next to her was like, ‘Hey you look familiar.’ I told him what I was doing in Denmark and he was like, “Oh, I’m a surfer and windsurfer. That’s why I recognize your name and your face!” So even when my bags were too heavy, too big and too many, these agents at the ticketing counter took care of me. Really friendly and helpful people. They were amazing. So that was an amazing first experience in the country, meeting incredible people.

Most ridiculous thing you’ve ever done on an SUP?

The most ridiculous experience I’ve had on a stand-up paddleboard was probably paddling 20 miles across the Pailolo Channel in Hawaii. It’s one of the world’s roughest channels, in between my home island of Maui and Moloka’i. I paddled across with my friend Ben Rhodes with the idea to go surf and camp. So we had a surfboard and camping gear strapped onto our SUP. On the way there it was downwind and down swell, so it was a nice easy ride that took us about two hours.

Curious to see what this whole SUP thing is about? Come try it for yourself on this Nicaraguan Adventure featured at The Outdoor Voyage!