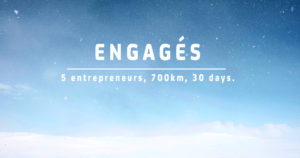 The Outdoor Journal has been updating our readers as to the progress of Engages, which you can read here.

During May, five French entrepreneurs will team up to cross the toughest terrain of the world’s largest island when they visit Greenland – a total of 700km in 30 days. We’ll track their progress with updates they send us during their expedition.

The strong bond of entrepreneurship unites us. We know the sacrifices and commitment that it takes to found a company: knowing how to push the limits with both team spirit and great humility.

“That which does not kill us, makes us stronger.” — Friedrich Nietzsche

Maxime LAINÉ – 27
Founder of Weesurf in 2015, an app that allows each surfer, whatever his level, to find the best place and the best time to go surfing. When he has a goal in mind, even the most unreachable, he always finds ways to make it happen. Amateur gliding, surfing, skiing and skateboarding since childhood, he swaps the beaches and waves for the polar cold. Thomas TIRTIAUX – 25
Co-founder of Solen, a technology that measures sunlight from a simple picture taken with a smartphone which is used in real estate to indicate the brightness and sunshine of a property. Super creative, always full of ideas to share, for example, the expedition! Lucas SERVANT – 27
Co-founder of Ignition Program, an HR lab that selects candidates with high potential for startup roles, and accompanies them along their career paths. As an inveterate adventurer, Lucas also follows along the Tour de France by hitchhiking. Valentin DROUILLARD – 25
Co-founder of Wape, management tool that strengthens employee engagement for remote offices. A Reserve Lieutenant in the Army, Valentin is thirsty for human challenges in a team. Antoine NOEL – 27
Co-founder of Japet Medical Devices, which develops medical device robotics for rehabilitation, including the first exoskeleton to relieve patients with chronic back pain and accompany in the recovery of activity. Driven by the challenges and passion of technology, Antoine sailed across the Atlantic after completing his studies at MIT.

Greenland is an autonomous province of the Kingdom of Denmark. It is also geographically linked to the North American continent. When you visit Greenland, you are visiting the largest island of the planet, with an area of some 2.2 million square kilometers, of which only 410,000 square kilometers are not covered by the ice sheet. Its most northerly tip is just 740 kilometers from the North Pole. At this time of the year, the temperature can vary from 0 ° C to -40 ° C and daylight shines almost continuously, as there are only 4 hours of darkness per day.

The team is inspired to visit Greenland by intrepid explorer Mike Horn, and his thoughts, “we dream too often with our eyes closed, we have to dream with our eyes open.”

Read Next On The Outdoor Journal: Taming the Munga-Thirri Desert with Mike Horn.

Your Own Trip to Greenland

Discovering Ice Sheets in Greenland
Greenland, the land of the midnight sun, has one the world’s most expansive ice sheets, second in size only to Antarctica. Here, in the last frontier for many experienced travelers, lie the uninhabited and lonely stretches of nature at its most magnificent. The world has long glamorized Greenland for being destitute; remember Walter Mitty’s famous landing in a crumbling Nuuk? In reality, the country offers up a mix of mystery, history, scenery and wildlife—redefining Arctic cool. Book now on The Outdoor Voyage.