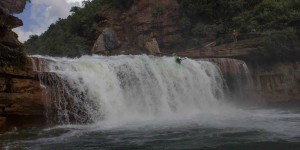 In their first month of paddling in Meghalaya the team found rivers too low, then too high and finally just right.

Catching the right river level for a first descent is a tricky business; too high and things can get pretty spicy, too low and you’re dragging your kayak over shallow rocks, leaving behind colourful strands of plastic. With notoriously high rainfall, rivers in Meghalaya were never going to be easy to predict.

Our first stop was the Jaintia Hills, famous for its unregulated coal mining and subsequently Irn Bru flavoured rivers. Top of the tick list was the Moublei, and from the satellite images it looked like a bedrock dream.

It turns out satellites can’t tell you everything. The river had an unnatural orange colour and burned skin and eyes on contact, and after a number of hours of scraping down shallow slides and portaging waterfalls, it was pretty clear that we could do with double the flow. Patience was wearing thin but soon enough the decision was made for us and we saw at the lip of a very large waterfall. With steep-sided valleys below and no obvious paths, getting around was going to require some serious effort, so we sacked it off and hiked back to the car.

With levels low, our next stop was the Riwang, a small, steep tributary of the already classic Kynshi River. After a day scouting yet another very large waterfall, we hiked in below and paddled some cracking whitewater.

As the days progressed, the rains arrived and the river started to rise. On the final night we camped on an island at the confluence with a small tributary and after a night of thunderstorms woke to find a much larger tributary and a worryingly small island. By the time we reached our usual put-on for the Kynshi it became clear that the river was starting to flood, confirmed by severe weather and flood warnings from Shillong. Plans to continue down the Kynshi were scrapped and yet again we headed home with our tails between our legs.

Just Right
With some decent rain we returned to the Jaintia Hills, this time to look at the next valley over, the Rymbai. It was third time lucky, the level was perfect, and we found some great slides and a thirty foot waterfall. Unfortunately, just like with Goldilocks, it wasn’t the end of the story, check out James’ blog on the rather unfortunate events that followed below.
http://www.palmequipmenteurope.com/blog/en/particularly-spicy-butter-masala