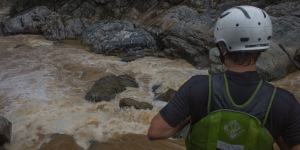 The All India Kayak Team have their most epic adventure yet; a six day mission with terrifying portages around unnavigable waterfalls, sketchy cliff jumps and of course, plenty of awesome whitewater.

It was our fourth day on the river and we had just lost one of the kayaks. A shout from upstream and then a flash of colour as I saw the boat tumble down the waterfall we had been climbing around. It filled with water in the pool below and I watched helplessly from high on the bank as it dropped down into the next rapid and disappeared amongst the boulders, with it a quarter of our food, James’ camping gear and some very expensive camera equipment.

We were on the Khri Bah, a steep river flowing north down off the Shillong plateau, down into the Brahmaputra, Assam. Some friends had paddled the first 10km the year before but had hiked out to the road before the river became gorged and remote. They returned with stories from fishermen of large waterfalls downstream in a gorge walled in by large cliffs. We had selected a 60km section, repeating their first descent and continuing downstream into the gorge.

The first three days had been very hard work; the character of the river was distinctly unfriendly with sharp and dangerous rock formations. There were many portages requiring us to climb over boulders with heavy kayaks, make large cliff jumps and scary river crossings. Most of the rapids that we could paddle were difficult and not particularly fun. Still, we held out hope, maybe just around the corner it was going to get really good!

Fortunately we had lost the kayak about 2 km upstream of our best chance of escape, where the river flattened and came relatively close to the road. We contacted friends in Shillong who managed to organise a replacement kayak and resupply (thanks guys!) and spent the following day hiking up out of the valley and back before camping out and continuing downstream. Still, everything was awesome and it was really great to be a part of a team.

Ten minutes downstream, we found the lost kayak tangled in a tree. We left it on the bank for collection later. In fact, three weeks later we received an email from a local fisherman, he had found a waterproof bag filled with camera equipment and later returned it!

Another 15 km later the river steepened once more, but this time the character was cleaner and instead of portages and sketchy rapids we found fun, clean drops and great slides that wouldn’t look out of place in the whitewater mecca of Norway.

The rest of the run was fantastic gradually getting easier with beautiful grade four rapids all the way to the finish. We finally made it to Ukiam a very remote village in Assam.