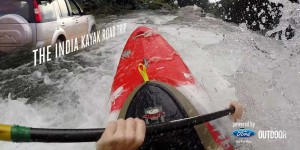 The India Kayak Road Trip – About the paddlers

Since you last heard from us, we've been clocking up the miles in the eastern states of India.

We’ve kayaked fantastic new rivers in Chhattisgarh, Orissa and Jharkhand and soon we’ll begin the long drive to Meghalaya and beyond. But in all this excitement, we realised that we hadn’t properly introduced ourselves – how awfully rude.

So, here’s a brief introduction to the team as it stands:
Joe is what many would describe as a ‘lifestyle kayaker’; that means that he has avoided the real world more successfully than any other member of the team. To this day, Joe believes that a ‘mortgage’ is an exciting custard-based french pastry. As a result, he has visited and kayaked in more countries than it is possible to mention in this article. This is his fifth trip to India and it will not be the last.Dan has spent most of his adult life on the water as a professional river guide, raft guide and photographer in Scotland, Kenya and Iceland. These days, he can be found dangling from tall buildings or cliffs and spends his evenings surfing on the south coast of England. Dan particularly likes to kayak in areas teeming with dangerous wildlife and has more than once woken up startlingly close to a hippo.

Callum is the only member of the team who can still legitimately call himself a student. Fortunately, he’s found a university within a short drive of some of Scotland’s best whitewater. Callum has been kayaking longer than any other member of the team and has won both of the UK’s most extreme races; a feat which he attributes to his expertly groomed facial hair. Originally Perthshire’s tallest man, Callum’s love of ‘boofing’ excessively large waterfalls has caused him to lose an inch or two – but not where it really matters.Dom sets himself apart from the rest of the team in that he has concrete career aspirations. He has therefore made it his mission to squeeze every last drop of sweet freedom from his last glorious summer of unemployment. When he’s not treading the tiles as the Midland’s foremost Leonidas impersonator, you can find Dom slaying the world’s finest whitewater. A recent shoulder injury put him out of kayaking for several months, but thanks to rigorous daily arm exercise he’s back to fighting fitness.

James  is the closest thing to an adult that the group has. When school is in, you can find a clean shaven, well dressed Mr Smith educating future generations in North Wales. However when the school bell rings, you can find James lapping the tight wet ditches that drew him to Wales in the first place. Around the end of summer term, James performs a mighty transformation: rapid beard growth, decreased showering and a limited variety of clothing signal that it’s time for the next adventure – adding to the already extensive list James has racked up across five continents.Ayodhya is a raft guide and kayaker from Uttarakhand. Crowned Rapid Raja from the 2013 Malabar River Festival, Ayodhya is one of the smoothest paddlers in the group. With his sights set on the Adidas Sickline Championships this coming October, Ayodhya is one to watch on the international scene. Don’t be put off by his small flowery kayak – as he’ll tell you, its not the size that matters – its how you throw it around.

So there we are – six young, excessively handsome men out to have a great adventure in India. If you can’t come across and say ‘hello’ in person, you’ll be able to keep up to date with our activities right here at The Outdoor Journal.