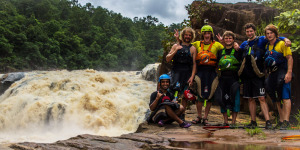 Splashing rivers all over the country for almost four months now, Phulbani is probably the most epic river our kayakers have come across so far.

Some river trips are good, others are great, and some you never forget. The first descent of the Phulbani was one that the lads on the All India Kayak Expedition will remember for years to come.

After spending weeks in Koraput trying to obtain permits to paddle the rivers in the tribal south of Orissa, the team eventually gave up and headed north, trying to keep a low profile. Putting on the river just after sunrise, the lads were treated with a full day of remote paddling.

After a few km of flat water the team were met with a serious gorge, with all sorts of rapids, from slides, drops, volume rapids and everything in-between. About six hours in, and 5km into the whitewater section, just as things were starting to get stressful, the gradient chilled out a bit, and the river turned from a class IV/V slow-moving section to a beautiful class III/IV  run, allowing the second 5km of whitewater to be paddled in two hours, meaning the river could be completed in one single day.

Orissa certainly holds hundreds more whitewater gems, and whilst the team are stoked to have been able to have been on the first whitewater descent in the state, there is so much more out there to discover.