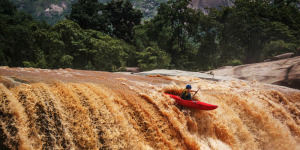 The Sankh river in southern Jharkhand was the last river the group ran before leaving the Eastern States.

The Sankh has drops between 20 and 30 meters every kilometer cutting through large granite slides and further drops in an area more akin to the high sierra than the plains of India.

Jharkhand, in general, was a massive surprise for the team. The state is known for very little, and doesn’t even warrant its own chapter in most India guidebooks, rather, it is an afterthought to Bihar to the west, India’s poorest state known amongst travellers as an unsafe place to visit. However, in time we suspect this area will be famous amongst some sports, with its geography perfect for paddling, climbing and bouldering, and who knows what else.

After waking up on the bedrock of the river to around 40 people watching us sleep, we cracked on pretty quickly. The first rapids were steep and full of natural pot holes and syphons. With the heat of the day starting early the first few hours were seriously hard going. Within the first kilometre there was a huge river wide syphon, where the entire river flowed under rocks and within the second kilometre there was a huge rapid which handed out all sorts of different lines, and a pretty scary swim.

Day two started slow, but kicked off with a pretty meaty rapid that woke everyone up quickly. Throughout the day the river mellowed out down to a respectable class IV/V section, providing an incredible variety of whitewater that is so unique to this area of the world.

As the day went on everybody became more and more comfortable on the water, and by the afternoon were bombing through some pretty big whitewater. Less than a kilometre from the take-out bridge, James took the lad line and swam on a curler into a hole that could eat Chennai, finishing the run with a reminder of how serious the river is.

Loading up the Ford Endeavor getting ready to drive to Meghalaya we all agreed that the Sankh held the hardest whitewater we had come across on the road-trip so far.