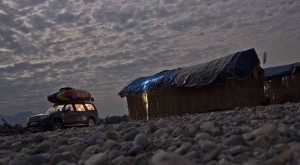 The penultimate adventure for the India Kayak Road Trip was confronting ocean-like rivers in Arunachal Pradesh.

Arunachal Pradesh is home to some of India’s largest and most dramatic rivers.
Being India’s most north-eastern state and bordering the tentative Chinese border, access to the state is highly controlled.
This being said, it has some of the most untouched and dramatic rivers that the world can offer, with large rivers such as the Siang flowing from the Tibetan plateau, with waves that feel like you are on the ocean rather than a river.

With driving time measured in days, instead of hours, getting around certainly takes its time.
The team had a limited three weeks in the state, where they had trouble reaching the upper stretches of the Lohit river due to the military zones along the Chinese border. But other than this the team managed to tick off the Dibang river and many of its incredible tributaries and the Kurung, in its very jungle-like setting. Every river that the group paddled in the state was of extreme quality and beauty.

The Siang would be the most dramatic run of the trip, it is the lower stages of the Yarlung Tsangpo which is often seen as the ‘K2 of Expedition kayaking’. With a manageable gradient its rapids are of epic proportion. They are grade II and III rapids in technically but in a huge scale.

The All India Kayak expedition had a great three weeks in Arunachal Pradesh paddling rivers that have already been explored, but it will not be the last as Arunachal has to have some of the best and most diverse array of paddling opportunities in the world!