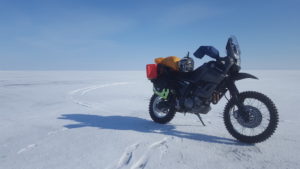 Lithuanian motorcyclist Karolis Mieliauskas recently embarked on a frigid expedition to cross Baikal alone, with nothing but his bike to see him through.

Shaped like a crescent moon, Lake Baikal is the deepest lake in the world. In the winter months, its icy surface is a lunar landscape of the coldest kind. Looking to explore the unknown both without and within.

Whereas most motorcycle enthusiasts like to take their bikes out for an afternoon lap around the countryside, Karolis Mieliauskas likes to ride his motorcycle for thousands of kilometers straight for days on end.

Recently Karolis completed an expedition extreme even by these standards. He spent seven days riding his motorcycle across Siberia’s Lake Baikal, making his way over 765 kilometers of the deepest freshwater abyss on the planet, completely alone.

At its greatest depth, the bottom of Lake Baikal is approximately 1,640 meters below the placid surface. It holds roughly 20% of the world’s unfrozen fresh water supply. Well over half of the thousands of species of plants and animals that call it home are endemic to Lake Baikal’s frigid waters.

Perhaps not the most obvious candidate for a motorcycle odyssey… But for Karolis, it represented a new kind of challenge.

In 2016, he rode his bike from Vilnius, Lithuania to Vladivostok, Russia—an 11,000 kilometer journey that he finished in just two weeks (12 days of riding and two full rest days). He has also ridden long distances in Morocco and elsewhere in his native Lithuania.

“I like to see what’s inside of me during these long rides,” Karolis explains. “I do these trips solo. Most people like to enjoy the scenery, take pictures, stay in nice hotels. But when I go out, I think of it as a journey inside, to meet myself. It’s very similar to the morning mediations that I do.”

If he wanted to ride in winter, Karolis realized his options for long, uninterrupted routes were few. Still wanting to engage in his motorcycle meditation, though, he began researching big frozen bodies of water that would fit the bill. “There were only a few places in the world where you could trust the ice and ride that distance,” Karolis says, “and Baikal was 6,000 kilometers from my home, relatively close for here,” he says. “The size of Baikal ultimately called out to me.”

Karolis prepped his Yamaha XT660Z Tenere for an adventure, outfitting it with studded tires, heated handlebar grips, and mitts for his hands.

On his first day at Lake Baikal, he took his bike out for a three-hour test ride and came back with serious concerns. Huge snowdrifts covered much of the lake. A snowmobile would be more appropriate, he mused.

“But I went anyway,” he says. After all, if it were easy, he wouldn’t be interested.

The first day he covered an obstacle-laden 70 kilometers, battling a buildup of snow between his legs and the engine. Visibility was limited to 200 meters. Most worrisome of all were the constant doubts he harbored about the thickness of the ice beneath his wheels.

At the end of that first day he veered towards shore and found a place to stay for the night. Karolis traveled without a tent, bedding down in towns along the shore each evening.

After three days, the amount of snow on Lake Baikal’s surface dissipated. “I was on black, blue and white ice,” he says. “The wind blew snow across the Lake exactly like sand blowing in the desert.”

The biggest challenges Karolis encountered were massive fractures in the ice. Anywhere from 10 centimeters to three meters across, these cracks were violent ruptures in Baikal’s surface, with large blades and blocks of ice poking up as much as two meters in height and revealing liquid water below. “To get over these, I had to jump my bike,” Karolis says.

“The journey was mentally very hard. For three days in a row I saw no one on the lake at all. Just ice and snow everywhere,” he remembers. Riding that far and long was physically difficult as well—temperatures tens of degrees below zero, long hours on the bike, and a number of big crashes—but Karolis knew that would be the case. “I enjoy the state of mind when I’m pushing myself in this way,” he says.

The scariest thing about his trip was his inability to learn the language of Baikal’s ice. Even after seven days in the barren beauty of its whiteness, he was surprised at how different the surface of the lake could be below him than it had been just 15 kilometers prior. And the scary part about that? “It makes me want to do it again to try and understand it better,” he says, a mischievous tone in his voice.