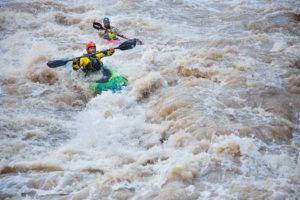 No Barriers Can Stop Blind Kayaker and Climber Erik Weihenmayer

Erik Weihenmayer was the first blind person to climb Everest and to complete the Seven Summits. In his new book, he tells the story of trading mountains for rivers as he set out on a quest to become the first blind person to kayak the Grand Canyon. But if the book makes anything clear, it's that his blind firsts pale in comparison to his vision for changing people’s lives through his nonprofit, No Barriers.

In his new book No Barriers: A Blind Man’s Journey to Kayak the Grand Canyon, Erik Weihenmayer writes, “I’d been swept aside, shoved into a dark place, and left alone there. Blindness descended upon me with such force that I thought it would swallow me.”

He is describing the experience of losing his vision at the beginning of high school, but it could just as easily describe some of his hairier moments learning to whitewater kayak. For example, the book starts with a moment during his descent of the Grand Canyon when he gets stuck upside down in his kayak in a rapid called Lava Falls. Dark. Disorienting. Terrifying.

When I talked to Erik Weihenmayer earlier this week, he said the connection was anything but oblique. “My fear of kayaking was sort of like my fear of going blind,” he said. “While kayaking in Mexico the first time, I got in over my head and got sucked down into these big vortexes. Your brain gets overwhelmed. I started having dreams of being sucked down the river and swallowed up.”

But Erik’s book isn’t about getting swallowed by blindness or rapids. It’s populated with characters—friends, family, mentors—that time and again demonstrate his belief that “Life is a good journey—even if shitty things happen along the way and you get destroyed a few times. It’s still a great ride.”

After Everest, the leader of Erik’s Expedition, Pasquale, told him, “Don’t make Everest the greatest thing you ever do.” Erik took those words to heart, and while he has continued to break barriers as the first blind man to complete all sorts of other impressive feats, he has also sought to imbue his expeditions and work with greater meaning.

“I’ve seen so many people either get stuck or shoved to the sidelines or destroyed in their lives,” Erik tells me. In the book we see it firsthand. There’s his friend and kayaking partner Rob who suffers from an aggressive cancer. There’s his brother who suffers with substance abuse and ultimately died far too early.

“What with my experience going blind, I can’t stand seeing people stuck. So it’s increasingly become my lifelong mission to figure out how to get people unstuck so they can be happy and fulfilled again,” Erik explains.

Erik’s primary vehicle for that mission is No Barriers USA, an organization he founded in 2005. No Barriers has taken thousands of people with disabilities on adventures around the world and shows them what they’re capable of. The organization’s mission is to “unleash the potential of the human spirit.  Through transformative experiences, tools and inspiration, we help people embark on a quest to contribute their absolute best to the world.”

Despite Erik’s initial claim to fame being his first blind summit of Everest, No Barriers has a much broader mandate: to help anyone who is or might become “stuck.” One of the organization’s most successful and enduring programs is No Barriers Warriors, in which veterans mount alpine expeditions, some to serious mountains like Lobuche, in Nepal, and Cotopaxi, in Ecuador.

“Blindness is one visible barrier, but the majority of the world has invisible barriers: they have massive anxiety or doubt, low self esteem, PTSD. There are so many possibilities. In a way, as No Barriers has grown, I’ve often thought that if you lose a leg or you go blind, maybe you’re one of the lucky ones. For those physical disabilities there are prosthetics, but with barriers of the brain, there are no prosthetics.”

Today, No Barriers USA is almost a $5 million revenue organization with 30 staff members, that works with nearly 5,000 people per year.

The other strand of Erik’s book is obviously his mission to become the first blind man to kayak the Grand Canyon. Now 48 years old, he didn’t begin kayaking until he was 40.

Once the seed of running the Grand Canyon was planted in Erik’s mind by friend Harlan Taney, he spent years learning the sport, training on other rivers around the world and perfecting systems with friends to help him navigate a violent river he wouldn’t be able to see. With an earpiece in his helmet, he received instructions, information and warnings about what was coming his way

Or rather what he was going towards. Compared with the slow, methodical nature of climbing, kayaking was fast and unpredictable. Erik says, “Kayaking was like getting thrown into a storm. You’re just reacting and responding, and I can’t see what’s next. Waves hitting you left and right, you’re getting slammed into rocks. I’m getting hit, flipped, and I’m listening to commands in an ear piece, so there’s just so much happening so fast.”

Before Erik went for his descent of the Grand Canyon, another blind kayaker, Lonnie Bedwell, did it before him. Though initially somewhat bitter about missing out on another “first,” Erik ultimately saw it as inconsequential: The mission was still about breaking barriers, just a different set of barriers now. Erik writes about a proposition he made to Lonnie after the latter’s descent:

I don’t know about you, but people often tell me how ‘inspirational’ I am. […] And I know they mean it as a compliment, but sometimes that word can divide us. It says, ‘You’re the inspirational blind guy, and you exist over there, yet I’m just a normal person, and I exist over here.’ As you know, in a little more than a year, I have plans to kayak the Grand Canyon. If one blind guy paddles it alone, people can easily write it off as some kind of anomaly, but if two blind guys paddled it together, then the story gets bigger, and it becomes more about what’s possible for everyone. It says that all of us can push forward and be that inspiration. So what I’m getting at is, will you join me on my expedition?”

Bedwell accepted on the spot.

When Erik, with Bedwell and Harlan Taney on the team as well, finally paddled 277 miles down the Grand Canyon in 2014, he felt ready and confident.

But even with his preparation and his support team, there was no avoiding the fact that things could go wrong on a river as serious as the Colorado.

He remembers being particularly nervous about running a section called Upset Rapid. One of the other team members, Timmy O’Neill, had run the section not long before and had gotten stuck in a hole. “You don’t want to be in that situation,” Erik tells me. “Timmy got sucked way down and held there for a while. He came up and then got shoved under again. He was probably under for like 30 seconds—an eternity when you’re in a kayak.”

Going into Upset Rapid on his actual descent, Erik Weihenmayer focused on slowing his breathing, and pushing fear out of his mind. And everything went great.

“There were massive waves on the left, a huge hole to the right, and I just squeaked through on this narrow line right between. I trained for 6 years, and those 40 seconds were worth it all. So amazing. Afterward I just sat on a beach, reflecting on being connected with the river and riding that perfect line. You just feel lighter.”

Which is also how Erik has felt ever since his book was finally published. It took him a year, but he churned it out. He would’ve liked to be “outside playing” of course, but he knew that he had to put down this story: of himself, of the people around him and the mission he and No Barriers are on. “I just wanted to tell about this cool journey and the real people I met, all blundering, and feeling and bleeding their way forward. We’re all in the same club at the end. And that’s what i wanted to do: just write about real people, no bullshit.”