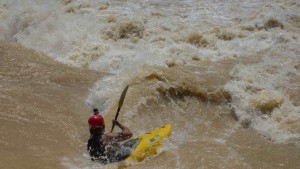 The India Kayak Roadtrip – The Kynshi

My first thought as the Kynshi came into view was “wasn't there supposed to be a beach?” I turned to Joe, and it became clear that the river was much higher than he had seen before and we had no idea what it would be like downstream in the gorge.

The Kynshi starts up high in the West Khasi hills before falling off the plateau in dramatic fashion. Just before it breaks out into Bangaladesh the river drops once again, through a gorge compressed between vertical walls and strewn with boulders the size of houses, over some phenomenal whitewater and a 15 metre waterfall.

In fact my first look at the Kynshi river was actually its tributary, the Wableu, making the large volume of water passing by all the more worrying. Just two kilometres downstream this river would double in size at the confluence and I was struggling to imagine what the rapids I had only seen in photos would look like with ten times the flow.

“It’ll be fine”; three words that have preceded the very best and the very worst of my kayaking experiences. The thought of another twelve hour drive back to Shillong made braving on all the more appealing, that and this was Callum’s last chance to paddle it before departing back to the U.K in a few days time. We packed enough food for five days and set off downstream.

The rapids were monstrous and we had plenty of time to watch huge holes and impossible moves as we portaged again and again, high on the banks over boulders, kayaks on shoulders. On day one, as we crossed the flow after a particularly gruelling hike, a big wave threw me into the air and dumped me on my head ripping our only cooking pot off the back of my kayak. On day two, we reached “Shillong in a Box” now overflowing the crack in the rock where it normally resides.

Day three, we reached the last camp. Just as the whitewater stops the Kynshi has one last surprise, a perfectly clear pool fed by a waterfall.

Three months later the rains were long gone and we returned for my fifth Kynshi lap. Whilst everything had become familiar, the rapids and lines change slightly on every run as the river level drops. Part of the magic of this river is that it runs at such a huge range of levels throughout a long season. The final night we explored high up on the bank and high above river level the rocks were still smoothed out into bulges and curves with drill holes deep into the bedrock, a reminder that at peak monsoon the Kynshi is a different beast entirely and we haven’t come even close to taming it yet.