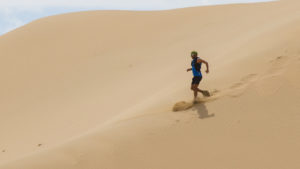 A Trail of Ice and Fire with Ray Zahab

Ray Zahab seeks out vast areas of remote wilderness around the globe to explore human interconnectedness and empower students with experience-based learning.

Ray Zahab seeks out vast areas of remote wilderness – the most inhospitable areas on the planet – to explore his connection with humans around the world, push his own personal limits, and connect students with empirical learning.

Ray Zahab, a Canadian extreme adventurer, rebelled from his former destructive lifestyle and won the very first ultra-marathon race he entered in 2004, the Yukon Arctic ultra, as a complete surprise to himself. (Listen to the full podcast episode on iTunes).

“I spent the first 30 years of my life talking myself out of doing stuff cause I was so afraid of what other people would think.”

Over the next 15 years, he has ventured on 15 expeditions over fire and ice, deserts and tundras, crossing tortuous terrain in extreme temperatures. In addition to ultra-marathon races, Ray has run over 14,000 kilometers across the world’s deserts, including running solo across the Gobi desert and the Atacama, known as the “driest desert on Earth.”

“We haven’t even scratched the surface yet in ultrarunning into what the human body is capable of.”

In 2006, he ran 7,500 km from Senegal to the Red Sea, crossing the Sahara Desert in 111 days (A documentary film was produced and narrated by Matt Damon). In 2009, Ray and two fellow Canadians broke the world speed record for an unsupported expedition by a team to the Geographic South Pole. Ray is the Explorer in Residence for the Royal Canadian Geographic Society, and in 2015, he was awarded the Meritorious Service Cross, one of Canada’s highest honors.

“Every person is capable of something extraordinary in their lives.”

As an educational avatar, Ray runs with a classroom on his back. In 2008, Ray founded Impossible2Possible or I2P, a charitable organization that empowers children around the globe to learn through Ray’s adventures both virtually and experientially. When Ray is out on expedition for I2P, the students become his motor.

“That sense of community where people really are helping one another is vital to survival.”

The following is an excerpt told in Ray’s own words about his closest call with death while on expedition in the Torgat Mountains within northern Canada, as told to The Outdoor Journal Podcast. (Listen to the full conversation here).

It was both the most terrifying moment in my life and the most liberating moment in my life when I broke through that ice, which, for all intents and purposes, was my mistake. I was scouting ahead of my expedition teammate Stefano and testing the ice. We were a two-man team and we were crossing three separate areas of the Arctic unsupported, with no safety support. This first leg was supposed to be the most straight forward. It was meant to be our warm up. We were dropped by helicopter on the eastern coast and we started making our way in very erratic weather conditions. It had been a weird winter in this area. There was a series of freeze-thaw, freeze-thaw, freeze-thaw which can change ice conditions tremendously.

“I knew I only had a few minutes to get out of there or I was going to die.”

I was scouting open water past a river gorge, negotiating sections of river that were very well frozen and solid. We were on the last section before the valley opens up. I moved ahead of Stefano to scout a section of frozen rapids that were in front of us, a small waterfall. And as I took one step…Boom! I went in. It crashed through the surface the instant I tested the ice. The acoustics were good. I was sure it was fine, but I was on an overflow and there was so much pressure from the water underneath pushing against that overflow that it made it feel solid even though the ice itself was fragile. As soon as I created a hole, that’s when my whole body broke through. I knew I only had a few minutes to get out of there or I was going to die from hypothermia or being pulled under the water. My feet weren’t touching the bottom and I had snowshoes on with crampons. But as I always do when I travel on rivers, my boots were unbuckled. So if ever I needed to I could get out of my boots because they’re going to weigh you down. But this time I just couldn’t get them off despite how hard I struggled.

Eventually, right in that time zone before slipping underneath the ice, all the way down into certain death, I hauled my leg out and my crampon on my snowshoe hooked the other side of the hole. It was on an angle and it hyperextended my hamstring, which still to this day has not healed fully. I instinctively pushed up on that and then rolled out to a safer point where Stefano could then haul me out because had he come to me, the ice would have all caved in. I followed the whole protocol exactly as we’ve trained for over and over and over again.

“I could not believe that I was going to actually get to see my family again.”

Luckily, everything we had trained for had worked. I remember coming out of that hole and rolling in the snow to get as much moisture off of me as I could. My body was already starting to absolutely shut down, I was so cold. But the crazy thing is, I was laughing out loud because I could not believe that I was going to actually get to see my family again. I was sure when I went into that hole that I was never going to see my kids again and never going to see my wife again. That’s all I was thinking.

When I came out, I went straight for the extra gear I carry with me on these Arctic expeditions. Canada goose had made me a custom down suit in case something like this ever happened, and it has been in my sled on tons of expeditions before, but now I was actually using it to save my life. Basically, I was hypothermic and I spent the next few days until we got out of that region shivering but feeling elated – the happiest I’ve ever been in my life. It taught me that although I thought I was living my life completely; I didn’t realize until that moment that perhaps I wasn’t. Life truly is too short and you have amazing people in your life and it’s about appreciating and nurturing those friendships and those family relationships and letting all the other shit go.

In this episode of The Outdoor Journal Podcast, Ray discusses his most memorable details over his 15 ultra-running expeditions – including stumbling upon ancient Incan high pass trails, finding petrified lightning and eating sand-grown tomatoes in the desert – as well as his most poignant moments of reflection on the human experience, spirituality, and our undeniable interconnectedness, and finally, how Ray keeps his legacy in perspective. (Listen to the full episode on iTunes).