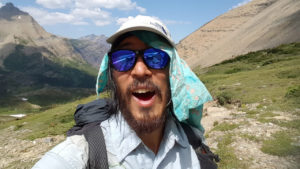 How Tyler Lau became the first person of color to complete the calendar-year Triple Crown: The hike, the timeline, the details, the athlete, the gear and the goal.

Tyler Lau has just become the first person of color to complete the calendar-year Triple Crown. The Triple Crown is the ultimate backpacking feat. Three long-distance thru-hikes. Nearly 8,000 miles. And Tyler Lau did it all in one calendar year.

The Pacific Crest Trail (PCT) spans from the U.S. border with Mexico just south of California, all the way up to the U.S. border with Canada in British Columbia. 2,650 miles through the Sierra Nevada and Cascade mountain ranges. The Continental Divide Trail (CDT) begins at the U.S.-Mexico border just south of New Mexico, runs 3,100 miles north through Colorado and Wyoming, and ends at the Canada-U.S. border just north of Glacier National Park in Montana. The Appalachian Trail (AT) is roughly 2,190 miles from Mt Katahdin, Maine, to Springer Mountain, Georgia.

An interactive map of the trails can be found here.

In addition to hiking all three long-distance trails, Lau created a platform to raise money for causes that inspire him. He developed the campaign “8,000 Miles for 8,000 Smiles” to help grow diversity in the outdoors and to fundraise money for organizations that promote diversity, youth empowerment, and LGBTQ rights.

Here are the key stats…

“One of the reasons that I wanted to do this, was that as someone who has worked in the outdoors and loves being outside, I have noticed a huge lack of diversity. I don’t know how to fix that, per se, but I just knew I had to put a different face out there… The big thing for me was raising awareness about the lack of diversity, and trying to get people of color, underprivileged youth, and communities out to access the outdoors.”

Lau wasn’t just hiking. He was hiking for a cause. He began his campaign, “8,000 Miles to 8,000 Smiles” at the same time that he began hiking last April. ALL the money is being split across organizations that promote diversity, inclusion, and equality in the outdoors. These organizations include the YWCA GUTS program, Empower MT, the Pacific Crest Trail Association, Appalachian Trail Conservancy, and the Continental Divide Coalition. A portion will also go towards his cousin, who is recovering from a coma.

With his own expenses for the hike being close to $17,000, it would have been easy for Lau to start a GoFundMe page to help with his own costs. Instead, he has spent the past ten years working seasonally in the summer and in the service industry during winter. He managed to save up just enough for the hike, thus allowing him to donate all the proceeds from his campaign.

*Editor’s Note: Is “Person of Color” an appropriate term? While it is used in this article because the subject themselves refer to themselves in this way, it is not a term that we are comfortable with. It is perhaps the politically correct norm in some countries, but that is far from the case in others. The Outdoor Journal was created precisely because conversations in the outdoor and adventure journalism space tended to be, and are still, driven by organizations and individuals predominantly in rich, western nations. We strive to be inclusive yet analytical in our approach, without taking anything for granted.

“Person of Color”, as a way to identify someone of a “non-White” background or ethnicity, implies two presuppositions:
1. That there is such as thing as a “White” person, and;
2. That there is some kind of obvious and fundamental division between two groups of people, White and non-White, aka, “of Color”.

Firstly, we at The Outdoor Journal do not believe that there is, in the world, such a thing as “White”, be it in science or in society. Secondly, we do not believe in a fundamental division between these two implied groups (of and not-of “Color”). Ethnic backgrounds, physical appearance, language, accents, cultural norms and values fall into a vast spectrum of colors and cultures, from Italian to Norwegian, from Tamil to Ladakhi, from Thai to Japanese, Khosi to Masai, Argentinian to Hungarian, Finnish to Sami, and everything in between. Rather than solve problems, we believe this terminology exacerbates them, and we are working to change that.

We are excited to celebrate Tyler Lau’s incredible achievement, and his drive to make the outdoors a more diverse and inclusive place, and we hope by doing so, these terms will eventually be eradicated from language.