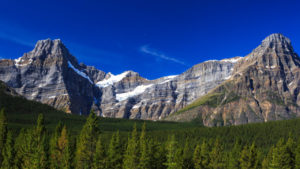 The world-class mountaineers were climbing Alberta’s Howse Peak on Tuesday, April 16th when a large avalanche carried them to their likely deaths.

The mountaineering community mourns the loss of three of its prominent members: 28-year-old Austrian David Lama, 36-year-old American Jess Rosskelley, and 35-year-old Hansjörg Auer. The trio were attempting to summit 3,295-meter Howse Peak by the technical M16 route up its east face on Tuesday, April 16th when they were reportedly ensnared by an avalanche and carried to their deaths.

According to a Parks Canada representative, the father of Jess, John Rosskelley, alerted the Parks Service on Wednesday morning that the party had failed to check-in the previous evening. Banff personnel launched a helicopter search mission that observed avalanche debris containing climbing equipment. In a media release, Parks Canada said that “Based on the assessment of the scene, all three members of the party are presumed to be deceased.” Due to dangerous avalanche conditions and new snow in the forecast, subsequent investigations and body recovery are delayed until an optimal weather window.

The team had notched Mount Andromeda in the previous fortnight. Howse Peak was their next objective on the spring expedition in the Canadian Rockies. The M16 route was first climbed in 2000, and it involves advanced technical mountaineering expertise. Lama, Rosskelley, and Hansjörg were members of The North Face’s Global Athlete Team and highly-regarded alpinists with the experience and skills required of the M16 route.

Got an early start and saw a beautiful sunrise on the way up the Andromeda Strain route with @hansjoergauer and @jessroskelley this week. Awesome alpine climbing and we were down before it got dark again. What a great intro to the Canadian Rockies.

Hansjörg Auer was regarded as one of the world’s most talented free solo climbers; he climbed a 37-pitch, 5.12c route in the Italian Dolomites called “The Fish” sans ropes or safety gear. He once said, “There is only one person you will have to bear for the rest of your life: yourself. That’s why being alone is so difficult. Even in the mountains, and not just because of safety. Being alone strips you naked, it makes you understand who you are, what is your value, the things that matter in life”

Read Next: Hansjörg Auer: No Turning Back

David Lama rose to prominence as a teenager with big wins in lead climbing and bouldering competitions. In 2012, he made the first free ascent of the “Compressor Route” on Cerro Torre in Patagonia. Last year, Lama summited Lunag Ri, which until his feat was Himalaya’s highest unclimbed mountain.

Spokane, Washington native Jess Rosskelley was the youngest person from North America to summit Mt. Everest when he climbed the mountain with his father in 2003 at age 20. His mountaineering career included first ascents in Alaska and Pakistan. He is survived by his wife, Allison.

The tragedy has not been officially confirmed, but John Rosskelley posted this to a friend’s Facebook page on Thursday regarding his son Jess and his teammates:

“As I write this, I know from speaking with the Park Service and rescue personnel yesterday that Jess, David and Hansjorg are presumed dead. It is with a heavy heart I have to say this, but they were hit by a massive avalanche off Mt. Howse sometime on Tuesday and there was visible evidence they perished. Thank you all for your prayers and thoughts.”

The route that Lama, Rosskelley, and Auer were attempting was first completed by Steve House in 1999. Years later, in 2015, House shared the below Facebook post, referring to one of the “hardest pitches” of his life and asking “#Whositgonnabe”

UPDATE: On Friday, Conrad Anker, who was a good friend to David Lama having climber together for years, tweeted the below message.

With empathy for the families of Hansjörg, Jess and David. So very sad. 😔😥 pic.twitter.com/AHDulhvcgw