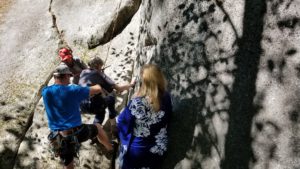 Hailed as one of the most prolific and pioneering climbers of all time, Fred Beckey almost became a myth in his own lifetime, with stories of his climbs often passed on by word of mouth.

In August of 2017, I and a few friends went rock climbing at Squamish, British Columbia, with another old friend who hadn’t been getting out much recently. I’d first climbed with this friend nearly thirty years ago, and we’d had a few great, spur-of-the-moment adventures together in the BC Coast Range and the Cascades. Although we both continued to climb extensively—he more than I—we hadn’t climbed together in the last twenty years. 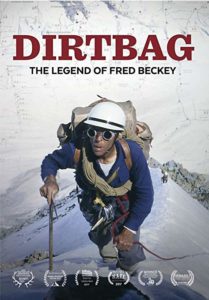 We went to a crag that would be readily accessible and easy to toprope. My old friend was tentative—to the point that he wasn’t sure he even wanted to put on his harness or rock shoes. So we just let him watch and think while the rest of us gave various climbs a try.

I think that seeing our enjoyment on the rock-inspired him, and after an hour or so, he worked up the gumption to gear up and be ready. For a while, he continued to sit in his wheelchair and look at the rock, as if wondering whether it would be worth it to try something that would have felt simple when he was in better shape, but might seem extremely difficult now, when he was no longer sure that his body would rise to the challenge.

Eventually, he announced that he wanted to give it a shot. With the rope tied into his harness and his rock shoes on, supported by two people, he managed to amble the fifteen feet to the base of a crack and start climbing up the clean, warm granite cliff. I belayed him, while the others gave a helping hand and pointed out holds and places to put his feet. His gnarled hands remembered how to grip the rock and use the constrictions in the crack to hoist himself up. But I kept a tight belay, cheating a bit by pulling him up with the rope as much as I could. I wanted the experience to be positive for him.

He climbed up about five or six feet on that first go, before saying he’d had enough and going back to his wheelchair to rest. We were all a bit disappointed because we could sense his frustration as he groused about not feeling better. But we were enjoying the perfect afternoon and we climbed some more while he watched.

To my surprise and admiration, he decided to give it another try. So, I belayed him again and kept it tight while the others assisted, once more, pointing out the holds and even placing his feet so they wouldn’t slip. This time, he struggled up about ten feet, impressing us all before his muscles lost their energy, and I lowered him to the ground.

My friend turned ninety-four years old earlier that year. He passed away less than three months later. He was my mentor at times, and an idol of sorts. By being able to observe his dedication to climbing until near the end of his life, he gave me the gift of knowing that adventure is always possible and should be pursued—because it gives purpose to your life and relationships and others will want to be a part of it.

He was Fred Beckey, and I’m glad to have known him.

Fred Beckey was born in 1923 in Germany, but his family moved to Seattle in 1925. It’s there, as well as the mountains of the world, that he called home until his death in 2017. He became a climber through the Boy Scouts and began exploring the Cascade and Olympic mountains of Washington State as a teenager. At the age of 16, he made the first ascent of Mt. Despair in 1939. Still a teenager, he and his younger brother put the North American mountaineering community on notice when they made the second ascent of Mt. Waddington in the remote British Columbia Coast Range in 1941. He logged hundreds more first ascents throughout his life

Despite climbing being the central focus of his life, he never worked as a guide or instructor. He received a college degree in 1949 and made a living doing odd jobs, writing projects, and writing mountaineering guidebooks for the Cascade Mountain range in Washington State—the bibles for any aspiring or experienced mountaineer in the state. In the process, he became an expert on geology and a true historian. He authored more than a dozen books and contributed hundreds of reports to the American Alpine Journal and Canadian Alpine Journal. He was well known to his climbing partners for having a gruff, irascible personality with an unmatched focus. He continued to climb and ski until months before his death of natural causes at the age of 94. Fred is the subject of the documentary Dirtbag: the Legend of Fred Beckey.

All photos by the author, Ambrose Bittner, of Red Lantern Journeys.