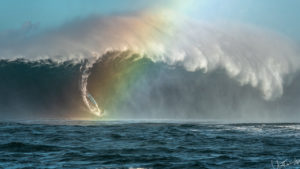 With conditions too radical and dangerous for competition, the world’s top windsurfers sail down the biggest waves ever at Jaws.

On November 26th 2018, The WSL Canceled the “Peahi Challenge,” a Big Wave surf contest at Jaws, a world-famous surf spot on the island of Maui, Hawaii, due to too heavy winds. Some of the world’s top windsurfers in Camille Juban, Kai Katchadourian and Rudy Castorina seized the opportunity to windsurf one of the biggest days ever ridden at the far-famed big wave break. Without water safety support,  they laid it on the line during every ride in a session to be remembered for all time.

The WSL Big Wave World Tour “Peahi Challenge” was on orange alert. We were on the lookout for promising weather and sail conditions for several days. It was a very big swell with light wind, but doable. So the question was:  “How are we going to be able to sail if the contest is taking place?”

The chief commissioner of the WSL gave the green light 48 hours before the day of competition, which made it impossible to sail. Of course, we thought, “There’s going to be all the WSL circus on the spot – 15 boats, 30 jet skis, all the best big wave surfers in the world waiting for their turn at the end of the contest to hope for a wave of this mega swell.”

We turned the problem around from every angle and we still did not see how to carve out our own moment to sail. So, that morning we went surfing another outside reef. Then, around 11 am the wind picked up. I started to see boats and jets returning to the harbour. I wondered what was happening. Around 11:30 am, I called the office where everyone was watching the Live contest and Bella (my partner) told me that the contest was cancelled. I immediately felt exhilarated! I asked her if it looked windy and she said, “Yes, it looks light, there is only Kai Lenny doing tow-in.”

We had never thought that the contest could be cancelled, but the conditions had become too radical and dangerous for the competition. At noon, we were at a leeward spot about 45 minutes away from Jaws by the calm sea, but the wheels were in motion to arrange our own epic session.

With 15 meters of swell and 15 knots headwind, it took us an hour to make it halfway up and recover the windsurf gear. The bay where we come in and out of the water with the jet ski to get the gear was closing out, so it turned out to be a very difficult and hairy situation. We arrived at the channel at 3 pm, ready to rig. All the boats and jet skis for the contest were gone and the spot was empty aside from Kai Lenny doing his own tow-in festival. The wind felt very light as we rigged our gear.

PICKING UP MY FIRST WAVE:

It was really not easy to catch a wave with this light wind. After about three or four attempts and getting blown off the back, I told myself, “It’s late, it’s been a long day, the wind is not going to stick around much, energy is running out, it’s time to go deep and get one!”. So, I positioned myself on the north peak in order to get a bit of a roll-in. With the wind updraft that comes up the face of the wave, you can start moving a bit (that’s when I started pumping) and hopefully transfer your forward momentum into the wave energy, then fight that updraft wind that wants to kick you out the back. This is exactly what happened and it allowed me to get into that enormous wave.

My equipment is a mix of production line and custom. That day I had a production 5.0m Black Tip SimerStyle with a 370 top and 400 bottom mast, which gave it a bit more on the low-end. My board is an 86L Tabou Jaws Custom board with almost 2 pounds dive weight screwed on the board in front of the mast track and a Production Quad Fin K300 MFC set up. I like to sand the end tips of the fins to make them really sharp.

As far as safety goes, I wear a Patagonia inflatable pull vest. As the session turned out to be last-minute that day, we had no proper water safety that could come get us in the pit – only a regular driver that would come get you before you would end up on the rocks on the inside.

BIGGEST WAVE OF THE DAY

That session pushed my personal limits to the next level. It was really dangerous if you would happen to fall at the impact zone of the main peak. I’d rather not think about it, to be honest. I didn’t have much time to warm up or reflect on just what I was getting myself into. It was just “Go” time. For me, the mental challenge of convincing myself to go over the ledge was the hardest part. Riding any big wave is a risky situation. A couple times after missing a wave, we ended up passing over the next one only by a hair. Luckily, none of us crashed that day.

Music by: Sleep / Track: From Beyond / Album: Holy Mountain