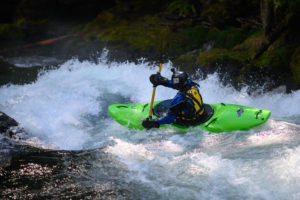 Natalie Anderson, world-class whitewater kayaker with a PhD in studying the way that rivers change over time, is raising the tide for the next generation of female competitors

Parking my truck in the driveway, there is barely enough room to fit between the piles of kayaks lining the edges of the yard. As I enter the house, the chaos continues. Trains, cars, and coloring books cover the carpet, while books, articles, and laptops are spread across the table. Peering out the living room window between hangers of drying kayaking gear, I spy two-year-old Davis having a small fit in the yard as Leif, his towering 6’7” father, explains that he cannot ride his Strider bike without his helmet. Davis storms off into the house as best as any 2-year-old can, and crawls into his mother’s lap. Natalie is sitting on the couch, laptop in hand, trying to polish up an academic paper on Driftwood and Rivers in the Mackenzie Basin of Canada. She holds a PhD in Fluvial Geomorphology from Colorado State University, boasts numerous scientific articles to her name, and is one of the best whitewater kayakers on the planet. But to Davis, she is jungle gym, cuddle buddy, and mom.

Natalie started kayaking in college. She attended rolling classes in the pool twice a week, which is where she met her very first boyfriend, and now husband, Leif. Leif holds a PhD in Theoretical Physics, has a 3-foot long blonde mullet, and is also one of the best whitewater kayakers in the world.

Leif has been kayaking since he was 12 years old, and has had a significant influence on Natalie’s kayaking progression. “I don’t think anyone who is successful at anything at a high level can get there without other people helping drive them there. You don’t get there by yourself. There would be no way I would be where I am now with kayaking without Leif.” The summer after Natalie learned to roll, her and Leif spent their time traveling to whitewater parks and waves around Colorado and Jackson Hole. Natalie progressed quickly, and by her third season in a boat, she was paddling class IV-V.

For years, Natalie has been at the top of the game. One of the best paddlers in the world paddling some of the hardest whitewater and throwing some of the most advanced tricks. Even so, she has always been one of the most underrated athletes out there. She was paddling the same hard stuff as everyone else, throwing just as big of tricks as anyone else, but still felt like she was a bit of an outsider in the international kayaking scene. When I asked her why, she answered, “We didn’t travel around a lot in the circles of people who are international. A lot of it is about who you know and who you hang out with that makes or breaks what circles you are in… but we were always up at the Slave River (where not a lot of other paddlers visit) and doing our own thing with our PhDs. I mainly just boated with Leif, and I was happy doing what we were doing. I didn’t really care enough to change things and put effort into making a name for myself.”

Another reason Natalie felt like a bit of an outsider – “Leif and I don’t party. We weren’t socializing at the after-parties and events where you would be meeting people and planning trips and such, and that is where a lot of the bonding happens. Leif and I were always in our own separate world where we were respected, but not necessarily known or on people’s radar.” All of this, however, has changed this past year. Natalie and Leif moved to White Salmon, Washington, which is often considered the whitewater mecca of the world, and where the majority of the world’s pro kayakers gather to train. “When we moved to White Salmon, I started boating with other people more and interacting more with people at parties. I honestly think the lack of recognition I received came down to us just not boating with other people much. But I don’t have any regrets with any of that because the few people I have formed bonds with, I have very strong relationships with.”

Relationships are important in a sport like whitewater kayaking. A sport where you need to trust that your paddling partners will always have your back, and that you will always have theirs. Natalie puts great emphasis on forming lasting bonds with her friends and kayaking partners. She has spent the past year focusing a lot more energy on creating strong relationships with other paddlers in the White Salmon community, and it has paid off for her not only socially, but also athletically. “You can gain recognition in the paddling community through races and competitions, but most of the time you actually just gain it through personal interactions and friendships. And by simply being a good person. When you go kayaking with other people outside of competition is when you gain respect. So if you paddle with other people more and have recognition outside of competition, you then go to the competition feeling more confident without the need to prove anything to other people.”

With her newly-received recognition among the international kayaking scene, Natalie entered this season with more confidence than ever before. The first race of the year was the Little White Salmon creek race, and Natalie won by over ten seconds. Her first ever win at a high-profile competition. And that was just the start of her season. Natalie also took home the win at the East Fork Lewis race, and placed 15th at Unleashed – a multi-stage competition on the big spring waters of Quebec. 15th may not sound like a high placing, but considering she was competing against some of the world’s strongest MALE kayakers in the world, it is actually pretty dang good! But the competition that Natalie is proudest of was this past weekend in Banks, Idaho. The North Fork Championship.

This was the eighth year of the North Fork Championship, and the first year the event hosted a women’s category. Previously, women were allowed to compete alongside the men, but lacked their own category. Because of this, only two women – Katrina Van Wijk and Nouria Newman – have ever qualified to race the finals course. This year, however, there was a full women’s division racing not only the qualification course – a class V rapid named S-Turn on the North Fork Payette river – but also allowing for five of the fastest women on the qualification course to race the finals course on Jacob’s Ladder. Jacob’s Ladder is infamous for it’s fast hydraulics and dangerous features. It’s the definition of a class V rapid. Four years ago, Nouria Newman made history when she qualified against the men to race Jacob’s Ladder in the finals. She placed 8th among the 20 finalists and set the standard as the best female kayaker in the world. But this year, five women earned the opportunity to prove their skills in one of the highest-viewed whitewater events in the world. And they did just that.

“It was an amazing experience to be there for the inaugural year of women having a class. I feel like I accomplished my goal for the event, and I feel like the female class made a good showing and paddled well as a group. We all ran really good races, and I am proud of and happy with how we all paddled.” Natalie says her goal for the race was to show the crowd that the women’s class deserved to be there. To prove that they were good enough, and to show the next generation of women that they are also good enough. And by qualifying for the final, and racing clean and smooth lines, it appears she did just that. “One of the goals for me for competing in this event was to be out there and to be seen by the next generation of female paddlers so that they can see me do it, and then come out in the future and do it better than me. I want them to see us paddle here and then be inspired to train for the event and eventually do it better than us.” Women don’t compete against each other to beat one another. They compete with one another to try and raise the standard for competition among their gender. “So many people came up to me and told me they were inspired by all of us women, and that’s what made the event worth it. That’s what you remember.”

Mariann Saether, Pavlina Zasterova, and Natalie Anderson are all mothers of children under the age of 3. “I am just proud of the fact that three of the women who competed in Jake’s are moms of kids under 3. I find it very inspiring and fun to paddle with Mariann and Pavlina. We see eye-to-eye on a lot of things, and it is always nice to not be the only one doing something.” Natalie balanced training and parenting by trading off practice laps and childcare with Leif, while also trying to sneak in enough rest to fend off the nausea she has been experiencing from her current pregnancy (oh yeah… did I mention she did all this while three months pregnant with her second child?).

Now that this competition season is winding down, I asked Natalie what her next kayaking goal will be. Her answer? “Get a consistent hull to hull airscrew before my 2 yr old son does. Time is running short!”