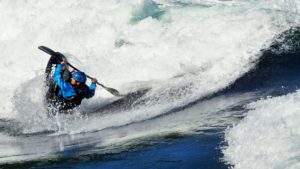 The Outdoor Journal is pleased to launch a new series, 'Outdoor Moms' - profiling mothers pursuing their sport, all while taking care of family.

Outdoor sports and adventure have a history of male dominance.  It is less common for women to be successful, and even less common for a successful woman to be a mother. Whitewater kayaking is no exception to this. Despite the challenges, Emily Lussin is one such whitewater mom breaking the stereotype.

As I paddle toward shore, there is no mistaking the sound of a motorboat putt-putting its way to a stop just a short distance away.  I pause my warm-up for a second and crane my neck to see who the mystery boater is.

A small woman, not much taller than five feet, jumps onto the rocks and ties the boat to a tree branch.  She then proceeds to start unloading the contents of the motorboat onto the barnacle-covered rocks. Two paddles, two freestyle kayaks, two lifejackets, two helmets, and a cooler bag are all stacked up on shore in a jumbled mess.  The final unload happens when her partner on the boat hands her what looks like a big bundle of blankets, and she takes off up the rocks with the bundle in one arm and the cooler bag in the other.

I continue with my warm-up routine and don’t notice the woman again until she drops into the wave for a surf.  I immediately realize who it is.

Emily Lussin isn’t a world-famous kayaker. But she should be.

Emily Lussin isn’t a world-famous kayaker. But she should be. Today we are kayaking the Skookumchuck Rapids in the Sechelt Inlet on the Sunshine Coast of British Columbia. The wave is good for kayaking when the tide is at max flood, and today the tide is just right. Emily and her partner, Dru, live in a cabin across the Inlet from the Rapids.  As soon as Emily gets in her kayak, you can tell this is her home wave. She maneuvers her kayak with minimal effort, performing aerial spins, flips, and barrel rolls that I have only ever seen performed by the world’s top male freestyle kayakers.  I watch as she throws a pistol flip- a 180 degree spin combined with a front flip- and then flushes off the back of the wave. She casually paddles back to shore, jumps out of her kayak, and joins Dru on the picnic cloth they have laid out on the rocks.  What I previously assumed to be a bundle of blankets is now a babbling and laughing toddler. Now that Emily has taken her first ride, it is Dru’s turn to go kayaking. Throughout their kayaking session, the couple will take turns kayaking and care-taking. Each of them gets equal time on the wave, as well as equal time with their daughter, Mya.

“The instructor I had a crush on, his name was Dru… is Dru. And yea, we’re still crushing!”

Emily started kayaking in her teenage years in her small hometown of Kingfisher, BC.  She had a crush on one of the instructors, which is what originally brought her to the sport. “The instructor I had a crush on, his name was Dru… is Dru. And yea, we’re still crushing!” Emily learned how to kayak with Dru as her instructor on the Shuswap River in Central British Columbia.  Since then, she has represented Team Canada in two different Freestyle World Championships, and has kayaked rivers all around the world, including Africa and Europe. Almost twenty-one years later, Emily and Dru are still kayaking together, but this time with a third family member in tow.

Eleven years ago, Emily and Dru moved to the Sunshine Coast and bought land on the Sechelt Inlet.  “We moved into this ½-acre jungle with a tent on the beach for a long time. That’s how it all started.”  The couple built a cabin completely from scratch- lumber mill and all. With 24-hour power generation from a small hydro turbine, they lived completely off the grid for four years.  Being that their cabin is only accessible by boat, they decided to buy a second house on the mainland when Mya was born. But Emily says she prefers living at the cabin with Mya. “I like having Mya at the cabin.  I find it easier to entertain. Maybe because I’m used to life here. I feel more at home here because it is also a house that I built from scratch.”

The family now splits their time between the cabin and the house on the mainland.  When they are at the cabin and the tide is right, they all hop in the motor boat and head over to Skookumchuck for a family day full of kayaking.

“You don’t just stop doing something after you’ve done it for this long, right?”

Getting back into kayaking after becoming a mother was no easy task for Emily. One of the biggest challenges she faces is dealing with motherly instinct.  She described the first time they took Mya to Skookumchuck on the motor boat this year as one of the most terrifying experiences of her life. She was so worried about having Mya in the boat that she couldn’t get herself to go kayaking once they arrived at the wave.  “After that first time in the boat where I just lost my head, I remember saying to Dru afterwards, ‘That’s it, I’m done. I am not going back there that way. I’m not. I don’t care if I never go kayaking again.’ My heart was pounding so hard. My emotions on the top.  That’s the worst I’ve ever had it.”

Despite the instinctual challenges, the family keeps coming back.  Emily describes their kayaking time as family time. “I don’t think I have been to Skooks yet without Mya.  The day may come when I want to do that. Maybe if she had something more fun to do. For now, I ask her and she says she wants to come.  I think she feels our vibe from it. Dru and I usually get pumped to go kayaking.” When Emily says she gets pumped to go kayaking, she is not lying.  Watching her kayak is like watching an Olympic gymnast perform their routine. It is as if the kayak is an extension of her body. She is a master of the sport, and in my opinion, one of the best in the world.

“Down the road, I would love to keep kayaking with Mya. Surf the wave with Mya. That would be an awesome day.”

For the next two hours, Emily and Dru continue to switch between kayaking and caretaking.  As soon as the tide changes and the wave starts to slow down, they change into dry clothes and sit down on the rocks for a picnic with Mya.  Afterall, kayaking time is family time. “I want to keep going because I want to show Mya how to do it, and hopefully make kayaking part of her life too.” explains Emily.  “I like being an inspiration. I feel I can do that through the lifestyle, and kayaking is a big part of the lifestyle that I chose.” An inspiration is right. One of Emily’s current kayaking goals is to perfect the airscrew- a trick that very few female kayakers have mastered.  But her biggest and most important goal is to inspire Mya.

After all, the Hebrew word ‘Mya’ means Woman of the Water.

Want to read more? Stay tuned for more in the Outdoor Moms series, and subscribe here.