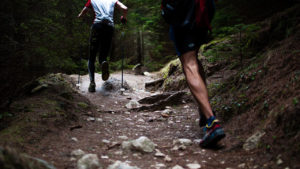 American Addie Bracy is an advocate for diversity, recently signed with Nike Trail Running and is making noise on the ultra scene. She's the pro trail runner who almost never was.

You might not have heard of the newest member of the Nike Trail Running roster, American Addie Bracy. She’s soft-spoken and humble in person and a relative newcomer to the ultra scene. But her emergence has been nothing short of meteoric, given the fact that her incursion onto the trails was completely serendipitous.

“One of the things that I hope to help promote is more diversity in trail running…My partner is also a competitive runner and when talking to Nike, they were totally on board for sponsoring us both as an LGBTQ couple in trail running.”

She pursued a collegiate track and cross country career when, by some measures, she wasn’t qualified. After college, she kept training, even though her modest times did not portend a successful competitive tenure. She ran on, mostly  unpaid and unsung, but fast enough to propel her to some big wins and to the Olympic Trials in multiple distances. Through the vicissitudes of race results, she kept going, even as performance anxiety and personal doubt hemorrhaged joy from the sport. In June of 2016, she was in Portland, Oregon, poised to run 10,000 meters around the track in a last-chance effort to qualify for the 2016 Olympic Trails in the event. Filled with anxiety and nausea, she ran almost a minute slower than the necessary mark. Catalyzed by this performance, she decided to step away from competitive racing. Feelings of inadequacy and self-deprecation were becoming too intrusive. A friend had mentioned an upcoming race, the USA Mountain Running Championship, and she signed up as an impromptu adieu to the racing scene. In July of 2016, Bracy ran her very first trail race ever on the steep hills of Lincoln, New Hampshire—and won.

The common denominator in Bracy’s running may be her indomitable resiliency. Ask an ultrarunner how they deal with nine hours in the pain cave, and many of them will point to an ability to simply keep grinding. Bracy’s ability to push through adversity may be the reason she has found success on the ultra scene. Her inaugural foray into the realm of extreme vertical and unpaved paths at the 2016 USA Mountain Running Championship opened a chapter Bracy never intended to write. Less than two months later, she placed 12th at the World Mountain Running Championships. It’s been pedal to the metal since then:

TOJ was delighted to correspond with the Nike newcomer:

TOJ: How long did you compete on the track and road?

Bracy: Almost 15 years! I started running track in middle school and then cross country and track in high school before running at the University of North Carolina in college. During that time, I think I competed in pretty much every event (on the road or the track) that is considered a distance event. I ran the 10,000m at the Olympic Track and Field Trials in 2012, and then the Olympic Marathon Trials in 2016. I moved over to trails shortly after that because I started to get a little bit burned out of the kind of racing I was going, but I still loved to get out and run every day.

TOJ: In what ways is trail running different from racing on the road and track?

Bracy: I love track and field and will always be a huge fan and supporter of the sport. But, as an athlete competing for so long, it felt like a really objective sport in the sense that you were either running faster or you weren’t. It was easy to fall into the trap of not only comparing your times to ones you had run before, but also comparing yourself to other people based on your race results. For me, how fast I was (or wasn’t) running started to really influence how I felt about myself which was an unhealthy place for me to be in. Trail running is a lot different. Every course is different, race conditions are always different, and nobody really focuses on the times you’re running. It’s a much more subjective experience that’s so much more about just going out and running hard and tackling the trail or the mountain. It’s a really supportive community full of a bunch of athletes supporting each other to go out and push hard together.

TOJ: How have you adjusted your training?

Bracy: There’s a lot of my training that’s the same as before. I still get on the track for fast repeats and do hard marathon type long runs on the road. That kind of fitness is still really important and I try to stay in touch with that during all my training programs. Of course, there’s some specific training that also needs to be done. I do a lot of my weekly running on trails just to get really comfortable with that terrain. And, depending on the type of race I’m preparing for, training sometimes includes a lot of hill climbs or runs with vertical gain. Training is really catered to whichever race I’m focusing on since the demands vary so much from race to race. But, that’s one thing I love about trail running and the variety keeps it fun and interesting.

TOJ: Tell me about signing with Nike Trail Running. What were your considerations in making this decision?

Bracy: I was looking for sponsors at the end of 2018 and had to really start thinking about what I was looking for in a company. One of the things that I hope to help promote is more diversity in trail running since it’s such a welcoming sport. My partner is also a competitive runner and when talking to Nike, they were totally on board for sponsoring us both as an LGBTQ couple in trail running. Nike has always been at the forefront of promoting inclusivity in sport and that’s something that we felt really strongly about being part of.

Bracy: My plans for the summer are still a little bit in the works. I’m running the Lake Sonoma 50 miler in April to shoot for a golden ticket to the Western States 100 in June. If I’m not able to pull that off, I have some back up plans to shoot for another 100. I’ve only done one 100, but I’m still very intrigued by the distance and want to take a few more cracks at it. Outside of my own running, I’m really just excited to help push the sport I love so much and to be as involved as possible. I do a lot of coaching and love supporting and crewing for my athletes. So, I’m excited to be at a lot more races in a support role.

TOJ: What advice would you give the you of 2 years ago?

Bracy: To just keep doing what you’re doing! A lot of amazing things have happened for me over the last year or so. There were certainly times when I first transitioned over to trails and before I had decided to go back to school when I felt a little bit lost and unsure of what my future looked like. Things have really come together in terms of having a great sponsor, loving racing, starting a coaching business, and finishing up a graduate program that I feel passionate about.

TOJ: How can other track and road racers make the transition?

Bracy: Just give it a try! Most road or track runners fall in love with racing on the trails as soon as they try it. In terms of actual training, many athletes love the transition because they get to get out on trails and see beautiful new places that they wouldn’t have otherwise. Most races are in such amazing locations that it tends to feel like a destination race. If you’re unsure of how to get started, there’s usually a community of trail runners not far away so reach out! The trail community is incredibly welcoming and kind.

TOJ: Tell me about grad school. How do you balance a pro career with school?

Bracy: I’m about to wrap up a graduate program in sport and performance psychology at the University of Denver. In terms of balancing a demanding program with trying to run professionally, it’s certainly been a challenge! I live just north of Boulder, but I’m in school in Denver so the commute alongside the time commitment can be tough. For the most part, I just try to keep my training flexible and get in my runs and workouts when I can. I keep shoes and clothes in my car and when a break pops up in the day, I take advantage of it. I haven’t been able to get on the trails as much as I would like, but I do what I can. I try to never approach training as something else that I need to add to my “to-do” list for the day. Running is time that I get to spend on myself and I view it as a nice little break every day.