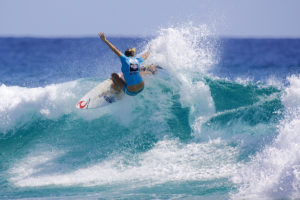 The WSL is setting the standard for gender equality not only in surfing, but for sport in general.

On September 5th, 2018, the World Surf League (WSL) made an official announcement that, starting in 2019, they will award equal prize money to male and female categories at every WSL-controlled event.

WSL CEO Sophie Goldschmidt said, “We want to be at the forefront of pushing for equality in all walks of life, starting on the waves, and we feel very lucky to have women on our tour who are highly talented, iconic role models, and more than deserve this recognition as they stand alongside our extraordinary male athletes.”

The WSL’s standpoint on the issue is as follows:

The World Surf League (WSL) oversees men’s and women’s professional surfing around the globe across multiple disciplines and development tiers.

In recent years, the organization has instituted pay parity at the Championship Tour level and we are in the process of instituting across other disciplines. As we continue to steward and enhance professional surfing worldwide, our focus will be on elevating the development tiers in this area.

The issue raised with regards to the Billabong Ballito Pro Junior stemmed from a pay parity execution based on original 32-man and 16-woman fields. However, withdrawals from the men’s event left a 24-man field (withdrawals saw only 14 ultimately compete on the women’s side) and a subsequent pay disparity between the two events.

This is an important topic to us. Our sport features amazing women athletes who compete alongside their male counterparts. We are committed to providing a platform for the best surfers in the world, regardless of gender, and recognize that prizing is an important factor in creating that platform.

This statement can also be found at http://www.worldsurfleague.com/posts/333966/wsl-statement-on-gender-equality-and-pay-parity

Despite past events, the WSL is now making serious strides towards a more equal sport. Six-time world champion, Stephanie Gilmore, told the WSL, “This is incredible, and I am thrilled. The prize money is fantastic, but the message means even more.”

Each year, Forbes announces a list of the World’s 100 Highest-Paid Athletes. In 2018, no women made the list. By setting an example of equal pay in all competitions, the WSL is setting the standard not only for surfing, but for sport in general. This announcement is a huge step towards equality for female athletes in all sports across the globe.