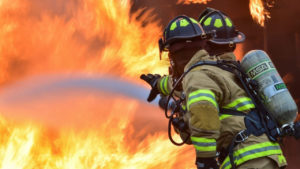 A Buried Report; Trump Refuses to Believe it

President Trump recklessly disregards the dangers of climate change in the face of resounding scientific consensus.

Climate change is not just knocking on the door anymore. It’s over the threshold and it’s looking to blow your house down. 2018 has brought us near apocalyptic signs of climate change to both coasts of the United States. We’ve seen biblical fires on the west coast and a series of devastating tropical storms on the east coast. Like “the nothing” in the 1984 film The Neverending Story, climate change is sweeping over the planet like a dark storm with no regard for life.

The data is alarming. Sixteen of the seventeen warmest years in the 136-year record have occurred since 2001, with 2017 as one of hottest years on record. The 2018 Atlantic hurricane season was the first on record to see seven storms generated over warmer, subtropical zones. And on the west coast, more than 6,000 wildfires ravaged over 1 million acres across California this year, causing damages worth more than $2.56bn – the most destructive and deadly on record.

On Black Friday, the Federal government published a new report detailing the nation’s imminent risks to the dangers posed by climate change. Specifically, the National Climate Assessment lays out how the United States economy and the health of each individual are at stake.

The report warned that “more frequent and intense extreme weather and climate-related events” are looming that will pose a threat to water resources, air quality, food and even national security. We can expect further deterioration to US infrastructure, in addition to natural resources like oceans and coastlines.

Although the report by the Federal Government contains critical information about our near future, the report was released on Black Friday, in an undeniably intentional move to sweep it under the rug.

UNITED STATES LEADERS ARE FAILING US

In a state of utter denial, President Trump has whipped up a reality distortion field around the imminent dangers facing us and even around the concept of climate change itself.

In a now infamous tweet from 2012, Trump put an unsubstantiated political spin on global warming. “The concept of global warming was created by and for the Chinese in order to make U.S. manufacturing non-competitive.”

The concept of global warming was created by and for the Chinese in order to make U.S. manufacturing non-competitive.

And this past week, he confused global warming with weather, tweeting, “Brutal and Extended Cold Blast could shatter All Records – Whatever happened to Global Warming?” – something you’d expect your Grandpa to say, to which you’d respond, “Oh, Grandpa.”

Brutal and Extended Cold Blast could shatter ALL RECORDS – Whatever happened to Global Warming?

To see all of the global warming related tweets in between, check out all 115 Tweets on the subject, as reported by Vox.

Scientists have been outspoken that while “global warming” describes temperature increases, “climate change” is a more apt description of the process by which humans emit heat-trapping greenhouse gases that cause extreme weather events.

When asked about the National Climate Assessment released on Black Friday, Trump dismissed the report, saying “I don’t believe it,” after admitting that he “read some of it.”

We’re seeing Trump’s belief system play out in policy decisions. In June of last year, Trump pulled the US out of the Paris Climate Accord, making it the only country refusing to commit to prevent global temperatures from rising 2 degrees Celsius above pre-industrial levels.

Trump’s statements on climate change, although baffling to most of us who choose to educate ourselves on the subject, nevertheless seep into the consciousness of his base, unfiltered, and propagate like a virus. Although tweets may seem unofficial and less significant than a public address, they normalize climate denial in the face of resounding scientific consensus. Trump’s message is clear – his policies and decision-making will disregard the dangers posed by climate change.

Notwithstanding Trump’s distorted reality, extreme events are expected to increasingly disrupt and damage critical infrastructure and endanger public health. Read More: About the 3 Things Everyone Can Do to Fight Climate Change Right Now.