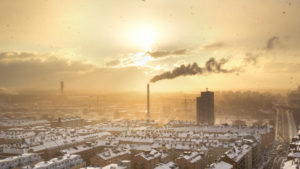 ClientEarth is Europe’s first law firm set up to protect the environment. James Thornton and his lawyers use law as a strategic tool to hit major polluters where it hurts most - their bottom line.

In the midst of our global climate crisis and a sudden sweeping pandemic, a bright spot of optimism emerges this month from an unlikely place – climate finance.

Corporate greed is nasty business. When shareholder expectations must be met on a neverending basis, corporate officers tend to put company profits first, while failing to consider the impact their decisions make on the environment. In fact, despite the well-documented link between fossil fuels and climate change, big banks like HSBC and JP Morgan are still putting billions into fossil fuel projects, including coal initiatives. Since 2015, Barclays – one of the UK’s top banks – has invested more than $100 billion into fossil fuel companies, making it the largest financier of fossil fuels in Europe. But this month, its board made an astounding about-face by announcing its ambition to target net-zero carbon emissions by 2050, and committed to align its financing activities with the Paris Climate Agreement.

And all it took was a letter from James Thornton.

“If you’re going to stop climate change, you need to follow the money.”

James Thornton is one of the world’s leading experts on climate change litigation. As the Founder and CEO of ClientEarth, Europe’s first law firm set up to defend the public interest in the environment, James leads a team of lawyers who use the law as a strategic tool to protect the environment and human health. ClientEarth has represented public health, and ultimately the Earth, as its client in 15 countries within the EU. They’ve closed down existing coal-fired power plants across Europe, stopped the flow of finance to coal projects, and won several court battles to require governments to clean up the air, which has a direct impact on ensuring that people live healthier lives. “The goal of all of this corporate work is to begin to move the flows of money away from things that are going to harm people and civilization.” Formed as a charity and independently funded, their work demonstrates what a small group of people can do using tools of the law. (Listen to the full conversation on iTunes).

“We need to have a very deep think and a deep reimagining of how we conduct ourselves in the world.”

HUMANS HAVE A FIDUCIARY DUTY TO NATURE

The lawyers at ClientEarth are doing something very clever with the law of fiduciary duty to prevent big banks like Barclays from continuing to invest in fossil fuels. Instead of bringing a lawsuit against Barclays to prove that they polluted the air or ruined a river, James wrote the board a letter detailing the connection between their short-sighted vote for fossil fuels and the economic success of the company in the future. He made them see that “Climate change risk equals financial risk.” (Read more about how ClientEarth put Poland’s last new coal plant on ice).

The cool thing about using law in this way is that you have enormous leverage. And because the Earth is your client, which is why we call it ClientEarth, you get to pick the things that you, and all of your colleagues out in the wider world of NGO’s and universities and governments, what they all see as the most important issue.

In the US, corporate board members could historically avoid legal penalties for making decisions that lead to their company’s pollution by hiding behind a very favorable legal shield called the Business Judgment Rule, which protects corporate officers by presuming that they act in good faith and with the best interest of the company in mind. With that principle in place, corporate officers and boards were incentivized to maximize value for shareholders while disregarding the environmental impact of their decisions.

James had rooted his career in bringing environmental law cases for the National Resources Defense Council in the US, but he realized that in order to fight climate change throughout Europe and pierce entrenched defenses like the Business Judgement Rule, he would need to go beyond environmental law to make use of corporate law principles, such as the law of Fiduciary Duty. “Companies and investors need to understand they have a duty to move away from bad carbon investing towards a carbon-neutral future.” Today, ClientEarth has the only corporate law team in the world fighting climate change, and because of their work, the CEO’s of ecologically irresponsible companies are lying in bed at night worrying about their reputations, their personal liabilities and the survival of their companies.

In James’ book, Client Earth, he diagnoses the robust nexus between human beings and climate change – a decayed connection. Man is living out of harmony with the natural world by holding ourselves above it. Private gain is the new religion. Globalization phases out community life, it disconnects cause from effect. The Tragedy of the Commons is playing out on a global scale – without protection, nature is gobbled up by greed, and when everyone scrambles to get their share without regard to sustainability, nature is irrevocably destroyed. Although shamans used to be custodians of the forest at the tribal level, we’ve reached the point where systemic change is needed to create mutually agreed-upon protections. “My goal is systemic change to protect people and nature. The most efficient way to achieve it is through law. This use of law to create systemic change is the most complex and rewarding enterprise that I know.”

“We got the UK to swear ‘Never Again Coal.’”

But what happens if you make a common activity suddenly illegal? A prohibition, swifly imposed, creates great incentive for corruption. Those who continue in the old ways (to keep their business afloat) are now viewed as criminals and thus are more likely to pay bribes than fines. That corruption can continue up the power hierarchy to the point where the entire industry, and even those in charge of policing it, becomes entrenched. ClientEarth recognizes a better way forward by shaping public perception, which can generate a stronger current than abrupt rule changes. When ideas spread and people make up their minds that they object to irresponsible businesses so strongly that they stop consuming their products, then the market dictates that their behavior will change.

ClientEarth’s strategy for influencing public perception, ethics, and norms is to trigger systemic changes by selecting high profile cases. “Once something becomes law, it becomes actionable and enforceable. Shortly afterward, it becomes ‘common sense.’ It becomes possible for a small group of people like ClientEarth to use existing legal structures to trigger big changes.” This approach introduces agency into the public by establishing citizen suits as a viable alternative form of environmental enforcement. Hopefully, ClientEarth’s landmark decisions will influence economic theory on a societal level to include the value of nature. “We need to have a very deep think and a deep reimagining of how we conduct ourselves in the world.”

“If you pick your tools well, you can stop something that looks unstoppable.”

Objectively, plaintiffs who bring citizen suits against large, national, or even multinational corporations are facing a stacked deck. In many instances, these big companies use aggressive lobby tactics at both the state and federal levels to secure near immunity. In addition to political power, the legal system is a skewed playing field, especially for a company that is willing to play dirty. As part of standard defense strategy, big polluters can afford to put pressure on plaintiffs by extending the length of the trial over years. And even in victory, what seems like a large legal penalty is only a small “slap on the wrist” fine for a multi-billion dollar company.

Yet, James’ holistic mindset has helped him in securing victory after victory. ClientEarth has won three cases in as many years against the UK government over the country’s illegal levels of air pollution. This is important because as an “Invisible killer,” air pollution kills more than half a million Europeans each and every year. (Client Earth, p 119) “If you pick your tools well, you can stop something that looks unstoppable.”

Thankfully, Client Earth is even cracking down on fossil fuel “Greenwashing” – a company’s use of misleading information in its advertising with regard to their environmental practices. After an action brought by ClientEarth, gas giant BP didn’t even wait for the judge’s ruling in announcing that they were pulling their “Possibilities Everywhere” ad campaign. ClientEarth has even started a petition to ban fossil fuel ads unless they come with tobacco-ad style health warnings about the dangers to people and the planet. No more lies. ClientEarth demands “The Whole Truth.”

Despite fighting for the noble cause of protecting nature and the environment, James admits that “No environmental battle is ever won.” All of the hard work and resources that ClientEarth puts into a particular case could be overturned with a political regime change. “These battles don’t end, but winning them gives you the great hope from seeing the wonderful thing preserved, by setting up all of these terrific relationships with dozens of hundred of NGO’s and individuals so we can build a resilient community of human beings and shared interests as well as saving something and it gives you the inspiration to just keep going.”

In this episode of The Outdoor Journal Podcast. James discusses how he got one of the world’s leading fossil fuel financiers to reverse coarse with a letter, how he manages to win cases against large companies and even governments despite the imbalances of the legal system, how his work is influencing corporate boards to value their company’s impact on the environment and see that “Climate change risk equals financial risk” and which surprising country is making the biggest changes to create a more ecological civilization. (Listen to the full podcast episode and subscribe on iTunes).

To get involved with ClientEarth’s mission to put a stop to “greenwashing” ads by fossil fuel companies, sign the petition here.