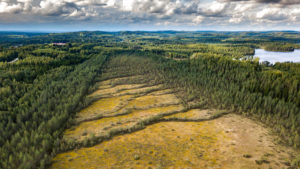 Finland's political infighting eclipses this forward-thinking country's dirty secret - its continued reliance on peat, an outmoded fossil-fuel, as a source for energy.

This article is the second part of a series entitled Finland’s Dirty Secret. Part one of the series, Extracting Peat for Energy can be found here.

The Finnish self-adulation regarding its forward-thinking approach to climate change, often echoed by the international community, is undermined by its continued reliance on peat, a toxic fossil-fuel, as a source for energy.

After introducing the environmental harm caused by Finland’s peat extraction in Part 1 – Finland’s Dirty Secret: Extracting Peat for Energy, our reporting will now expose the political controversy surrounding Finland’s continued reliance on this forgone fossil-fuel. The most culpable peat miner in Finland is a state-owned company called VAPO. As long as a corporation tied to the government continues profiting from a thriving peat industry, the truth-tellers will be marginalized, and Finland’s secret will remain just that.

The Finnish fate is directly linked to the rest of Europe and the world. The Scandinavian carbon sequestration, or “carbon sink,” is Europe’s equivalent to the Amazon, and therefore a common responsibility that our world cannot afford to allow to be mismanaged by a nation that has heavily given in to the ways of easy exploitation of natural resources for more than 70 years.

The entrenched political standoff between the Green Party and the Center Party is preventing any significant regulations to be passed that might rectify the ongoing peat disaster in the near future. As of August 16th, 2019, a budget draft from the Ministry of Finance has revealed that a suspension of the tax reliefs on peat will most likely fail. Disingenuous political messaging is partly to blame.

Nonetheless, Green Party politician Satu Hassi continues the fight. When we spoke to Satu, she broached the industry as a whole, “Peat extraction is called peat production, which is a misleading terminology because it is the natural wetlands that produce peat, then you mine peat, you don’t produce it, but that stops the natural production of peat. The peat industry deliberately chooses these much nicer sounding words to not reveal their dirty process.” On the significance of the issue, Satu went onto explain that “the whole peat extraction and burning is one of the biggest environmental problems in this country. It is disastrous for the climate but also for the water, our lakes and rivers and waterways are polluted and ultimately it all ends up in the Baltic Sea.”

“For the climate peat is even more harmful than coal.”

There are a number of environmental groups who are fighting to phase out the peat industry even sooner than the coal industry. However, the Finnish legal system may not be their best ally in this fight. The Finnish Association of Nature Conservation, led by the conservation officer Paloma Hannonen, foresees issues within the Finnish constitution, leaving ample room for interpretation of the forestry laws, putting the peat mires and wetlands at high risk of being exploited by the forest and energy industry. Meanwhile, Greenpeace has refocused their activism to remind politicians to stick to their plan of a carbon-free nation by 2035. They have now repositioned themselves from a proactive organisation, to promoting passive political interaction.

In contrast, the young organisation “Turvesuomi“ (Finnish Peat), formed in the spring of last year with the aim to bring attention to the issue by activism. The organizations leader, Mikko Neuvo, adamantly collected data on the emissions of the peat industry and information on the internal political fight, publishing daily on the topic through the website www.turvesuomi.fi. He started a movement of like-minded individuals, gathering on peat mires for demonstrations and showing a public stance in opposition to this dirty industry. Neuvo continues to raise awareness and fight for an earlier phase-out of peat. “It is a shame for my country to still be using this dirty energy source. New calculations show that Finland’s carbon sink will be 17.9 million tons of carbon dioxide versus the previously anticipated 35 million tons by 2035.“

In the midst of a political crisis this December, Sanna Marin became the world’s youngest currently-serving state leader. After the incumbent Antti Rinne was dismissed from his office for mishandling state issues, Sanna has stepped up to tackle a political cleanup as well as bring back a country that has heavily derailed from its promise to become a fossil-free nation. The nearly spent Finnish carbon budget keeps the eyes of many, especially those opposing the current political management, on the dirty industries of peat, coal, and non-sustainable forest industry, to sharply focus on the progress.
“peat burning must end.”

The Swedish-Finnish company Stora Enso, the world’s second-biggest forest enterprise, with the company headquarters in Helsinki, revealed that “We do not directly own forests or peatlands in Finland. We purchase wood mainly from private forest owners to make renewable and recyclable products.“ This statement fails to mention that Finnland, unlike its neighbor Sweden, allows harmful clear-cutting even on National “old-growth” boreal forests, which have not been inventoried for species, or carbon sequestration, making the claim for a “recyclable product“ rather questionable. Further Stora Enso writes, “We are committed to sustainable forestry practices and it is our firm intention to drive down our fossil fuel use, including peat, to as close to zero as possible, within a decade, using technically and commercially feasible means.“ However, a map from P. Keto-Tokoi and T. Kuuluvainen, documenting the disappearance of boreal “old-growth” forest from the Finnish landscape between the year 1000 and 2010 shows a development in forestry that can’t be further away from being called sustainable.

Although a significant amount of damage is occurring on site at peat farms, not all farmers are willing to speak out against extraction. Peat farmer Harri Haavikko attempted to defend the country’s extraction practices. “The peat industry in Finland, as it is, is sustainable. Less peat is harvested every year and the emissions are very low due to the modern techniques.” However, Haavikko makes no reference to any quantifiable data to support his broad claim. Haavikko rebuffed any further discussion by referring to an industry that has become “very hostile and political around the profession of peat farming and the debate is based on assumptions of ignorants.“

Finland has often positioned themselves on the high ground when it comes to climate change and healthy ecosystems. However, much of this is being undone. While political parties waste valuable time, the industries will seize hectare by hectare of virgin peat mires and drain their waters into the clean lake-system, continuing the pollution and destruction of the natural environment.

The use of peat to produce energy is not limited to Finland alone. Russia and Ireland are also using it for energy generation. However, Ireland has taken an active step forward and will put a ban on peat burning as of 2029.

Even countries not using it for energy purposes have stepped forward. The United Kingdom, for example, has put a ban on peat to be used as garden soil, starting from next year. Although professional gardeners have an extra ten years to comply with the peat ban regulations.

To comply with the actions required as per the IPCC paper from November 2018, addressing in particular climate change, Finland should set a positive example. Its importance cannot be understated, as Satu Hassi puts it, “for the climate peat is even more harmful than coal. The burning of peat includes the wet material that needs a great amount of energy for the drying process. Therefore you produce more CO2 per useful energy with peat than with coal and it is evident that peat burning must end.”

Political lobbying and fighting need to stop immediately. Everyone must work together to meet joint goals. In the middle of a climate crisis, there is no time nor tolerance to fight over political positions of power. Even if that means phasing out antiquated industrial practices that cannot be justified with an already depleted carbon budget in a modern nation such as Finland.

Stay tuned to The Outdoor Journal for Part 3 of Finland’s Dirty Secret – Solutions (Reversing the Damage).

All photos by Maren Krings