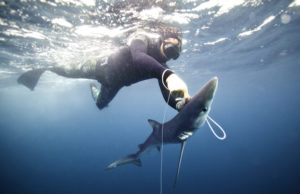 Get in the Water, Spread the Word and Change the World.

Our Oceans need your help, and this is your chance to create an impact for the better, whilst having a good time. You can start your journey today.

Underwater photographer, award-winning film producer and ecotourism activist, Jorge Cervera Hauser, has a resume as vast as the ocean that has connected his intense love for the deep sea and the creatures that inhabit it—particularly the toothy ones we think we’re most scared of – You can read more about Jorge by clicking the link below.

A very long time ago, I used to criticize photographers that said they were doing conservation work. Looking back now, I was too short-sighted to see the bigger picture. I only saw it as self-promotion, but when I produced a single film with a huge amount of impact, in comparison to “real conservation work”, that all changed.

To explain, I’m going to use one of the most overused phrases in marine conservation:

This was said by the great man in the red hat himself… none other than Jacques-Yves Cousteau. It couldn’t be truer, and it’s all about being passionate about something. When you’re passionate, you are contagious and people become interested.

All considered, we are almost genetically predisposed to be afraid of sharks. We all grew up watching films and sensationalist news where sharks were portrayed as man-eating killing machines, and let’s be honest, sharks are the perfect monster:

Over the past ten years, we’ve come a long way on shark awareness and conservation, especially within the diving community. However, imagine this, you are really afraid of sharks (like you probably were at some point in your life), you’re at a dinner party with good friends, and one of them tells you that they’ve just returned from one of PADI’s top ten shark diving sites. That’s definitely going to get you interested. You’re going to explode with all sorts of questions. They’re going to show you their photos. You’re not going to believe how they got that close to these huge animals without being eaten.

A chain of positive impact, started by doing nothing more than traveling, diving, and sharing.

A couple of days pass, you’re now sitting in your office and you decide to visit google shark diving. You’ve navigated to a PADI article that gives you a 101 on shark diving. You’re now seeing sharks as an über-interesting, magnificent animal. Whilst googling “shark diving” you realize that there is an ocean of species out there to explore. You get your PADI diving certification and less than a year later you’re in the water with Tigers and Great Hammerheads. Whilst there, you learn that your trip created a significant economic benefit for the islands and the local community, both directly and indirectly. You talk to the taxi drivers and hotel staff about your shark diving and they realize the activity is bringing more and more people to the destination. Those people are paid for their jobs and some of them are building new businesses… they’ve realized that it’s worth keeping sharks alive and having them around. They will push for their protection at their local council meetings.

A month goes by. You’re having a beer at a barbeque. You tell everything about your shark diving trip to a friend, you point them to the same articles that you read – and repeat.

If people have these great experiences, it will make them fall in love with the ocean. They will fall in love with all the amazing species. They will be engaged, and they will support initiatives to protect our oceans. These small changes add up, and they’re changes that we all can make. A chain of positive impact, started by doing nothing more than traveling, diving, and sharing.

My own passion for the ocean has led to a personal dedication to achieving the greatest impact possible. We still never expected to see the levels of positive change that we would later achieve.

Pelagic Life originally attracted some notoriety following a particular piece of chance content. Our guys captured a South African style feeding frenzy that featured lots of sharks, tuna, and dorado fighting over a huge sardine bait ball. We were producing open ocean content that you wouldn’t be able to see unless you had spent many hours hanging out with fishermen on the open water. All in the knowledge that most of the days you would strikeout. However, persistence pays, Baja delivers, and there would always be a day or two when the ocean would reward our stubbornness with some amazing wildlife encounters.

This particular story started when a group of friends wanted to document the Striped Marlin off the coast of Baja California, Mexico. Back then, we only had a small photography website (pelagiclife.org) that exhibited images from our expeditions as we went out to explore the Mexican open ocean alongside local fishermen. Those same fishermen would call us whenever there was any interesting going on, and we would fly out of Mexico City and head out in their pangas.

The Call of the Shark

Whilst out looking for the Striped Marlin, we ran into a shark fishing operation. Shark fishing is not illegal in Mexico, except for a permanent ban on three protected species (Great White, Whale Shark, Basking Shark). There is also a four-month ban every year on all shark species. Other than that, as long as you have the appropriate permits and abide by the rules, it’s allowed. It is also worth mentioning that most shark fishermen in Mexico are not bad guys. They are people that have been learning the same craft for generations as their only means to support their families and put food on the table.

Less than $20 USD for each shark they killed

When we found these Shark fishing lines, we also ran into the shark fishermen. A big coincidence given the size of their fishing grounds, the number of drum lines they use, and the large distance between them. We started talking and were baffled to hear that they were getting paid less than $20 USD for each shark they killed. Our initial reaction was to offer them twice as much for letting us jump in the water and unhook the sharks that were caught in the lines but also still alive. This was the genesis of a project called The Call of the Shark. The plan was to acquire financial support through our website so that we could commit to unhooking 100 sharks within the span of a year. A $40USD donation equaled one shark saved from a fishing line. We documented every step of the way with short clips called The Shark Diaries.

The fins of these sharks were being sun-dried and exported to Asia, while the meat was being locally sold cheap and served as generic fish meat in restaurants and taquerias. We knew it was a big issue, and whilst satisfying, the long term answer was not in unhooking 100 sharks.

Making all the difference in the world

Whilst saving the 100 sharks we had committed to saving, we were also using four years of footage to create a storyline. Now with a new impetus to fill in the blanks, we produced an independent documentary film called México Pelágico. We persuaded the Mexican Government to fund a 6-month study in Magdalena Bay (where these specific fishermen were from) so we could try to understand the open ocean activity in the area, seasonalities, and the potential of Magbay as a pelagic dive destination hub. Both projects, as different as they were, had the same thesis behind them: to explore sustainable ocean tourism as an economical alternative to fishing and involve the local communities in a way that they would know it was in their best interest to protect their own home and its species.

“Look, man, to that shark it made all the difference in the world”

The 6-month study turned into a 1-year study and a 200+ page document about Magbay, its species, and how to use divers to create a new diving destination. The documentary hit theaters in 2015 and presented the story of a group of friends exploring the Mexican open ocean. How through tourism, with local communities as operators, we could unlock the trick to protecting the ocean. The film, which was a labor of love and largely funded by our team, won several awards and was later available on both Netflix and the Discovery Channel. We were invited to present the film around the world, being welcomed to Harvard, Pixar, Columbia, Berkeley, UCLA among many others. We were able to persuade a global and diverse audience, into watching an ocean documentary. Thousands of people found a new interest in diving and importantly spreading the word themselves. We did it because we were passionate about something, without an agenda or without personal interests other than our own love for the ocean.

Returning to Magbay year after year, we were able to document species like Blue Whales, Fin Whales, Humpback Whales, Gray Whales, Blue Sharks, Mako Sharks, Silky Sharks, Smooth Hammerheads, Mobula Rays, Mola-Mola, Dorado, Whale Sharks, and … all in the same place. Then after almost 6 years of looking for the Striped Marlin feeding on bait balls, we finally hit the jackpot in 2016. Then it happened again in 2017. Now, thanks to years of coming back to the same place and never giving up, our pictures and videos finally put Magbay on the map. The Magbay Marlin is now “a thing”, and hundreds of people travel there every year to watch this amazing phenomenon take place. More and more fishermen in Magbay are turning into running these trips, and they are doing just fine.

We were a bunch of kids at the time, and if we managed to create an impact of this magnitude with just a camera and a couple of weekends spent in the ocean, I am certain that you can do way more. And even if your diving trip gets one more person into reading about the ocean, believe me, you have made a difference.

Back when we were unhooking sharks I was talking to a very good friend of mine and fellow ocean explorer Eli Martinez, and I told him it was frustrating knowing that what we were doing didn’t make much of a difference, to which he replied: “look, man, to that shark it made all the difference in the world”.

I’m going to wrap up by saying what I always say. Buy a pair of fins, get on a plane, and take the plunge. Get in the water and take a couple of pictures, spread the word, and while you’re at it, change the world.

Finding Your Story with PADI

Getting started is easy – learn to dive to see this incredible world for yourself, or book start thinking about that next dive trip. Start your dive adventure now from the comfort of home with PADI online courses, and connect with a PADI Dive Center or Resort to complete the in-water training when the timing is right.

Cover photo: Lalo Martinez unhooking a blue shark in 2012, at a time when Pelagic Life’s Call of The Shark began.

India executes the largest camera trap survey in the world and doubles its tiger population 4 years before the global target.

This past week Trump signed into law a stimulus package for park maintenance and conservation efforts.