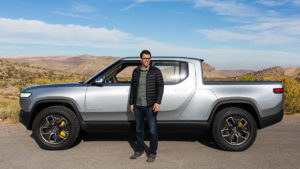 Meet RJ Scaringe. The Founder of Rivian, Changing the Way We View Transportation

RJ founded a car company, and yet he does not want people buying his cars in the future. This may seem like a strange business plan, but to RJ, it is the only way forward.

With Rivian, you won’t own a car. But you will have 24/7 access to a vehicle that drives itself to you with a simple press of a button. No, it’s not Uber. No, it’s not a car share. It is a self-driving, electric vehicle that will drive itself to you, whenever you need it, so you have access to it whenever you need it. People no longer have the need to own vehicles. They just call a Rivian!

“It was this truly deep internal conflict“

RJ’s lofty goals didn’t just spring out of the blue. He began his career working at a Porsche restoration shop in Florida, which is what sparked his deep love for cars and the car industry. “I’m a lifelong car enthusiast and grew up restoring classic cars, like the Porsche 356. Along the way, I decided that I wanted to get into cars, I wanted it to be the focus of my life. So I went to school to achieve it.” But no matter how much he loved cars, something about it always bothered RJ. “As I got more involved with it, it started to bother me how these things that I loved were simultaneously the cause of our changing climate, smog, and a whole host of environmental and social problems on the planet. It was this truly deep internal conflict.”

So, he set out to change things… 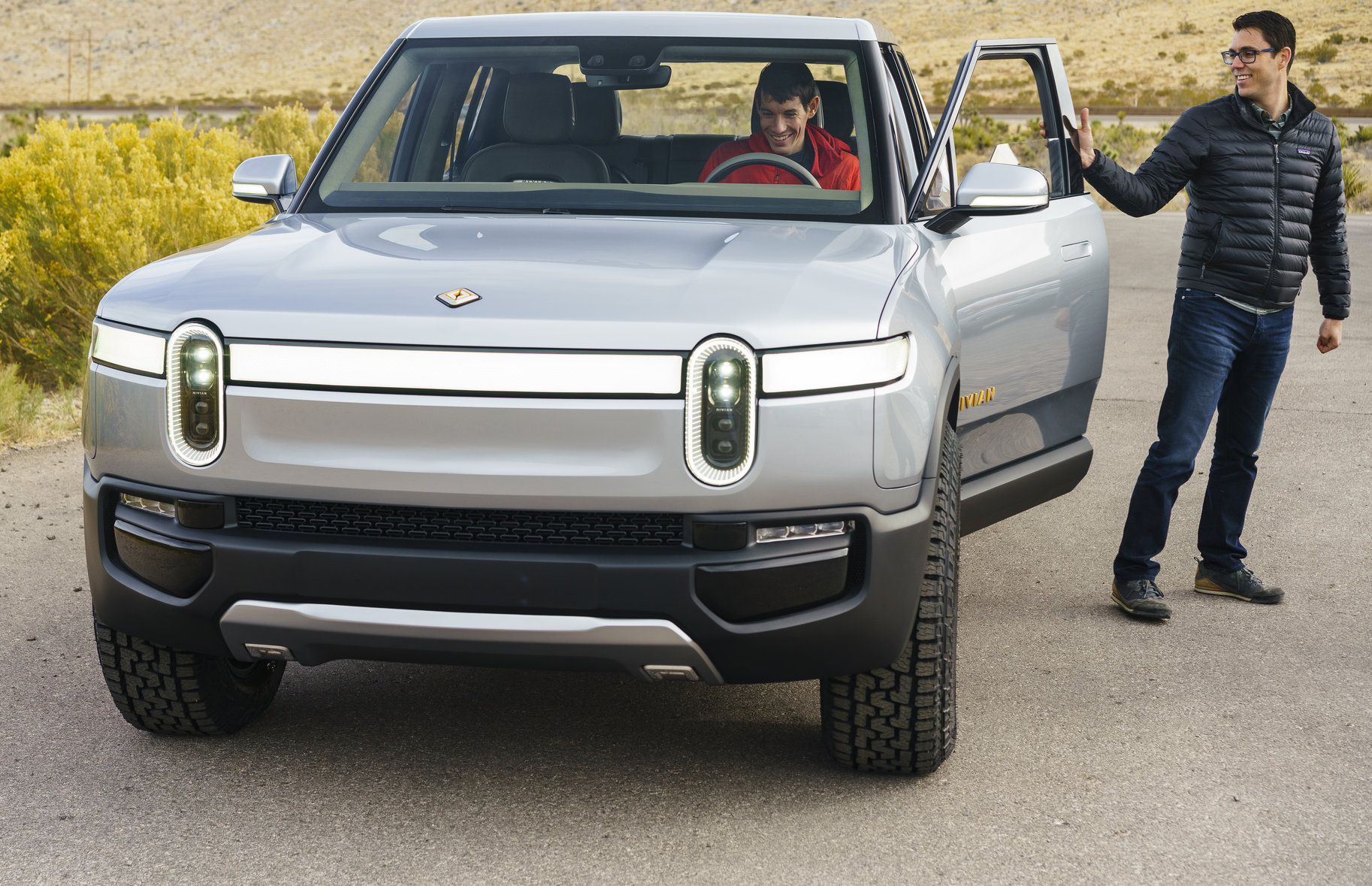 “It’s like I’m naked at the base of a super steep mountain, and have to figure out how to get to the top”

RJ went on to get his master’s and PhD from MIT with the goal of learning how to increase driving efficiency in vehicles. He went on from there to work for multiple large organizations, where he felt that efficiency could be improved, but they often lacked the ability to adapt to change given their structure. “I realized that I could have more impact by actually starting something on my own.” So he built his own company – from the ground up. “I saw how difficult it was to do big systems-level innovation even when you have really smart people. Just because of the scale of these organizations, the complexity of the organizations. So I said, ‘If you could redesign the organization to think of the systems-level, to not have the traditional boundaries between silos, and rethink from a clean sheet what the vehicle is, what the architecture is, what the company is…’”

So he did it. He started from a clean slate. No money, no team, no supply chain, no plant, no technology.

When asked if he has encountered any big challenges along the way, RJ responded, “It’s like I’m naked at the base of a super steep mountain, and have to figure out how to get to the top.”

Starting with less than 20 people, the company took some time to get off the ground. But after securing good relationships with investors and shareholders, the team began to grow. Now, with five plants around the world, and mass production set for 2020, RJ’s hard work and aspirations are all starting to pay off. Naturally, in the beginning, given RJ’s background working with Porsche sports cars, Rivian was focused on building an electric sports car. However, as the company grew, and as RJ’s love for the outdoors grew, so their focus began to shift.

“this whole world of conditioned air, of electronics and watching TV, of your vehicles that can take you places, is powered by fossil fuel“

“In college, I was heavy into mountain biking. I would be biking every weekend, and it always bothered me that going on those adventures, I would have to use a car. It was this weird juxtaposition of wanting to enjoy the outdoors and go into the outdoors, but on your way there, making the outdoors worse. So, to be honest, I thought about all kinds of crazy things I could build to fix this… Could I build a bike that could peddle power a car to take me to these adventures? I would bike really long distances to get to a hike, and then I would be exhausted and hike for only half an hour. And I’d be like, ‘okay, now I have to bike all the way back.’ So, we pivoted off of the idea of the sports car, and we decided to really focus that passion around adventure and outdoor lifestyle.”

And with that outdoor adventure lifestyle in tow, Rivian decided to completely rethink the way an outdoor adventure vehicle is designed. “The key for building a new company, and for that matter, establishing your brand, is that you have to have something that gets people excited. It has to foundationally reset expectations… So, it’s quicker than it needs to be. It’s better off-road than it needs to be. It’s more efficient than it needs to be. It’s sort of unreasonably good. But it’s there to make a statement, and that statement is the foundation framework we are building. And when I started on that journey, it wasn’t as unreasonably good as it needed to be across all the different areas of the vehicle. So we’ve kept on going back and saying, ‘Let’s make it better. Make it better, make it better.’ It’s three seconds, zero to 60. It’s better off-road than any vehicle on the market, and it’s wrapped in something that’s really compelling. It’s got great storage. It’s a unique vehicle.”

And with this unique vehicle, RJ hopes to help enable people to access the outdoors. “We often think that a vehicle can’t make you active, but it can enable that, and make it easier for you to generate memories. And from a societal point of view – right now, we collect our memories with pictures. So, we need to be designing a product that helps you to do the things you want to take pictures of. Like, you don’t take a picture of yourself sitting on the couch watching TV. But you take a picture of yourself on an awesome hike, or with the kids at the beach. And we want to enable those things that you’re going to take pictures of.”

Rivian vehicles aren’t even in production yet, and they are already a hot topic of conversation among outdoor adventure enthusiasts. They even gained attention from the outdoor industry’s biggest star, Alex Honnold, when he decided to leave his #VanLife behind and partner with Rivian as an ambassador. Honnold described his partnership as an easy choice, “Even if I wasn’t working with Rivian, if I wasn’t an ambassador or anything, I would still be supporting the brand. We need more companies like this in the world. The world has to go 100% electric at some point, and the sooner the better!”

“What are we doing wrong?’ I think every business should be able to answer that question – why the world needs them to exist.“

RJ hopes that by founding Rivian, this will help push other car companies to make the move toward electricity as well. “We as a society today live in a world where we have conditioned air in our homes. We travel 30 miles to get to the office on a daily basis. We don’t really think anything of it, but this whole world of conditioned air, of electronics and watching TV, of your vehicles that can take you places, is powered by fossil fuel. And what’s amazing is that in 100 years of this level of this style of lifestyle, we’ve used about half of what took 300 million years to accumulate. All the fossil fuels on our planet are 300 million years’ worth of plant and animal life that died and went into the earth’s surface. It then comes out in the form of coal and liquid fuel, and we literally used almost half of that in 100 years. It’s just staggering to think about how fast we are consuming that energy resource. It’s not a choice if we want to continue to travel and we want to continue to live the way we live today – we have to transition to something that’s sustainable beyond the next 100 years. And our argument is that the sooner we do that, the better, because simultaneously while using up all those carbon fuels, we are significantly changing the makeup of the atmosphere. We essentially took what happened in 300 million years where carbon was extracted from the atmosphere and put into the core of the earth, and we reversed that in 100 years. Of course it is going to lead to dramatic changes in our climate books. So, let’s make this change as fast as possible. We’re going to have to make it anyways. It’s not a debate, it’s a fact. We have to change. We can’t continue moving around like this on the planet. Everything we do at Rivian is to try to get that to be faster.”

All in all, we are excited to see what Rivian has to offer in the future. RJ’s business tactics may differ slightly from the way his competitors do things, but that may be just what the world needs right now. Who knows – maybe other businesses will be able to learn from RJ, and from the question he asks himself every day. “Does the world need us as a company to exist? Because if the answer to is no, then you need to take a step back and say, ‘What are we doing wrong?’ I think every business should be able to answer that question – why the world needs them to exist.”

Find out more about the Rivian vehicles here.