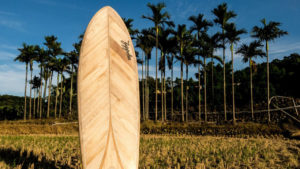 Surfing the Dream in Taiwan

In a small coastal village of Taiwan, something special is emerging between the jungle and the ocean.

Tucked away in a remote part of the eastern coast of Taiwan, surfer and board-maker, Neil Roe is working on his next creation. It’s a magnificent piece of crafted wood which begs you to touch it. On seeing it, I am seduced by its smooth curves, the rich grain of the wood and the delicate geometric insets. Is it possible to fall in love with a surf-board at first sight?

A deeper admiration surfaces when Roe explains that this board has literally emerged from the jungle outside. Roe shows me a log of wood lying in the workshop: “This is the wood we use. It’s called Paulownia and it’s a very strong and light wood that doesn’t absorb salt water and won’t rot. It’s also the fastest growing hardwood.”

“Roe tells me how he scours the Taiwanese jungle for fallen logs after typhoons have passed.”

My eyes are drawn to the twisted hunk of fallen tree. It’s difficult to believe that this transforms into the gleaming surfboards that rest against the wall. Roe tells me how he scours the Taiwanese jungle for fallen logs after typhoons have passed, and after haggling with the local indigenous people for a good price, he will haul the log back to the workshop.

Roe and business partner, Clyde Van Zyl, currently work from a rough studio that rests beside dense jungle some 2 km from the small town of Dong’ao. The town is perched near a bay with dramatic cliffs that plunge abruptly to the Pacific Ocean. Roe describes it as the ‘start of the real east coast of Taiwan’. Other than some low-key fishing operations and guests of organised kayaking trips, the pebble-lined beach in the bay remains relatively deserted. I’m told it’s possible to camp for the night and enjoy a fire on the beach.

“Before you even get in the water, just picking up a wooden board connects you with the earliest history of surfing.”

To get to the Zeppelin Wood workshop, however, we need to drive inland on the opposite side of town. We direct our taxi driver, flagged down from the train station further up the coast in Su’ao, deeper towards the jungle-clad mountains. As we drive onto a muddy dirt track she becomes increasingly agitated. It’s a relief then, when we see Roe popping out from a derelict-looking shed on the side of road and giving us a wave. She promptly tells him that we owe her more money for the rough driving conditions she has endured getting us there. It’s an exaggeration but I’m not about to argue. I’m keen to get inside the workshop and check out Roe’s creations.

Normal greetings aside, I can’t help but ask the Mandarin Chinese-speaking Roe how he ended up here. It’s a long way from Durban, South Africa. He explains that he was once slaving away behind a computer as a product designer, enduring constant deadlines, and feeling unsatisfied facing the daily office grind. He started dreaming about the possibility of going to Japan, famous for its woodwork and joinery, and finding some wood design guru who would agree to mentor him. And so, off he set.

But a quick stop in Taiwan on-route visiting an old university friend teaching English quickly turned into three-months, six months, then a year: “I remember I was on a surf trip to Taitung with some friends, camping on an empty beach, jungle clad mountains rising up behind us, Pacific Ocean blue in-front, empty waves rolling endlessly down the point right there. I was hooked. I remember thinking… Can you really do this? Is this kind of life possible? I felt so free in that paradise. I never wanted to leave. I’m still here ten years later. Still smiling.”

Not long after this, he and Van Zyl searched the east coast for some place small to start building their business from, with key requirements of being cheap, close to the waves, and having accommodation to begin a small guesthouse. But the business has now outgrown the current facilities, and the owner of the guesthouse returned home and wanted his house back. The pair are currently searching for new premises to expand their dream of surf and lifestyle.

One of a Kind Craftsmanship

Their expansion plans also align with their new partnership with a surfboard manufacturer further up the coast who will do the final epoxy-fibreglass finishing of each board. It’s a messy, time-consuming job that’s best done on a larger scale and Roe tells me this will make the whole process more efficient. He’s hoping that once cranking they will be able to make finished boards within ten days.

But this isn’t mass produced product at budget prices. Roe is aiming for the type of surfer who has a passion for a different type of surfing and is prepared to invest in a one-of-a-kind board, made by hand, and coming from nature.

I ask Roe to explain the difference between riding a wooden surfboard to the modern foam composites. He hesitates, searching to put into words the obvious devotion he has for his craft and surfing: “There is an emotional pull for a wooden board, a type of nostalgia that draws you in. Before you even get in the water, just picking up a wooden board connects you with the earliest history of surfing. The ancient Hawaiians used to shape boards out of Koa logs harvested from the jungle. There are so many classic stories and photos etched into our memories of pioneer surfers riding balsa boards.”

Aside from the aesthetic and emotional reasons, wooden boards have other qualities according to Roe: “They are heavier, and this weight translates into a different feel in water. I think it makes you surf more in tune with the wave, as you start to use gravity and wave power to get speed and direction. You follow the waves lead and you end up surfing differently and a kind of graceful style evolves. Combining the extra weight with the stiffness makes for a silky-smooth ride you just don’t get on other materials. This is especially noticeable on the wooden longboards in bigger, faster and choppier waves.”

“Any invitation to come on over, enjoy a fire on the beach, surf, explore the jungle and generally get lost in this fascinating part of Asia is one worth taking.”

Surfing in Taiwan is gaining popularity but it’s still a little rough around the edges. But that’s probably what makes it special. The waves are most consistent between the months of November to March, although typhoon season from April to September can also reward surfers with big beefy waves. Water temperature doesn’t go below 20 degrees. Best of all, Roe tells me that you can easily find empty waves in the weekdays, and even in the weekends if you are prepared to look. There are plenty of places to rent boards and travel is relatively easy.

Just remember to bring an international driver’s licence, as well as your national driver’s licence, if you intend to rent transport. We didn’t and renting a car was impossible. Luckily, public transport is good with a train system running down most of the east coast with plentiful cheap connecting bus services. Most surf shops run shuttles, can hire out scooters, or are close enough that you can walk to the break. But having a car would give you much greater freedom to explore this wild coastline.

While Roe and Van Zyl are concentrating on developing their surfboard business they also encourage people to visit the workshop and get involved in the process of making something. And the pair offer a small number of dedicated surf trips where travellers can: “Chase waves, camp on the beach, visit the hot springs, and explore waterfalls and mountain swimming holes.” Basically, Roe says it’s the kind of surf trip that they like to do themselves when they have free time: “For sure we’ll take some of our boards along for the surfers to try out. But hopefully we’ll also make some friends along the way.”

Any invitation to come on over, enjoy a fire on the beach, surf, explore the jungle and generally get lost in this fascinating part of Asia is one worth taking. You may even fall in love with a piece of wood beneath your feet.