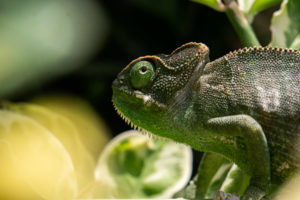 Nestled between some leaves, you see a beautiful little spiral from the distance looking like a little bright toy someone left lying around. Upon taking a closer view, you’ll notice this spiral has tiny scales on it! Who could have possibly manufactured something so perfectly? Wait! That’s no toy! It’s a Chameleon! Camouflaging so quaintly grasping on a branch, sticking his long tongue out catching some flies. He slowly starts bobbing up and down, because this lizard has sensed your body warmth when you come closer. He knows you’re around. You’d think he’d run right? But why is he fast walking away from you? That’s actually him running away! Probably because his senses indicate you might be a threat If you do manage to catch and hold him, He’ll start wiggling around and making a muffled screaming sound. At this point all his defenses have kicked in and his scales are slowly changing colours in your hand. He’s so frightened. But you’re calm and not moving so much. So he calms down too. Slowly you’ll notice, he seems like he’s looking at you, but he’s also looking right behind him. Woah! What a wondrous creature.

Chameleons are such beautiful creations of Nature. There are so many different types within its species. The Indian Chameleon is about 7 to 8 inches long and is found in most of South East Asia, Srilanka and India. They’re cold blooded animals and don’t have a temperature regulatory system within their bodies and heavily rely on the sun to stay warm. Thus explaining their tropical habitats.

They have a long tongue that shoots out to catch prey so quickly you’d miss it if you blinked your eyes. They have Bifid claspers on all four limbs that allow them to grip on various surfaces while they observe the world around them moving their eyes each independently in another direction. If only you could also literally watch over your back. They can go from green to bright yellow within minutes thus helping them camouflage quickly.

Because they’re so bright and colourful, many rural farmers think they’re deadly and poisonous where on the contrary they actually help the farm’s eco system by keeping small insects and crop hungry pests away. They wander about in the open during the monsoons in search of sunlight and startle unaware farmers. A few whom I met think they’ll die a dreadful death if they were bitten by a chameleon. So dreadful, they’ll start switching colours just as the chameleon does. These unaware folks bludgeon this little reptile to death in fear for their lives when they see them on their farms. This is where the importance of nature conservation must be highlighted. It’s important for farmers to be aware of the local biodiversity outside of just their farms so they can work in unison with nature around. Create a symbiotic relationship with the wildlife around and cultivate a nurturing mindset towards nature. Chameleons are not considered especially endangered but because of the lack of awareness in people about their true nature, it won’t be long before this beautiful creature of nature also meets this status of existence. It’s my wish to educate folks around and increase awareness about the importance of learning facts and observing the realities of character within every species in local biodiversities.

Reptiles are one of the oldest species of animals on our planet and play a very important role in the ecosystem. It’s so important to conserve the wildlife we have left and cultivate an appreciation for the lives around us. Chameleons live shorter lives in the wild because of their quaint nature, lower speed in motion, and lack of awareness and live about 5 to 10 years in captivity.

A lot of people adopt reptiles as pets but not many keep chameleons, but if one understands their true character and can create a balance of nature for them to thrive in, their company can be quite wondrous and rewarding.

Find out who lives in your backyard and try to see the world from their perspective.

All images are by the author. Cover photo: Who goes there? wonders the chameleon, slowly moving on a branch.