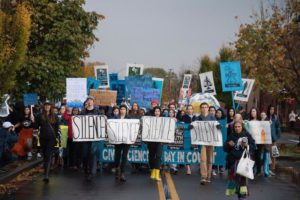 As a nation's leaders shrink from imminent global catastrophe, its youth rise to the challenge. In the US, a lawsuit against the federal government could galvanize climate change policy.

Aji Piper was just 15 years old when he and 20 other adolescents sued the federal government. Their contention: due to decades of misconduct, the country’s highest bureaucracy is responsible for deleterious climate change. Three years later, their lawsuit, Juliana vs. USA, awaits a trial date. As citizens poised to inherit a volatile climate and its incumbent challenges, the youth plaintiffs have turned to the courts as the last bulwark against an administration devoted to business-as-usual. As children and young adults, Piper and the other prosecutors have the activist mentality and tech-savvy to promote their case online and in the streets. “We are agency in action; we have to win in the court of law and the court of public opinion,” Piper says.

They’ve already got climate science on their side. Consensus from this month’s UN “Conference of the Parties” (COP) climate summit is that urgent remedial action is required of world leaders to address anthropogenic climate change. At the conference, heavyweight investors warned of $23 trillion annual economic losses should global leaders fail to slash carbon emissions and phase out coal burning. October’s International Panel on Climate Change (IPCC) report called for a 45% reduction in global carbon dioxide emission to avoid irrevocable climate-related dangers including sea level rise, mass crop loss, and extreme weather events. Forecasts predict a global temperature increase of 3°C since pre-industrial numbers by the end of the century—well above the 1.5°C target most experts champion. Climate-related hazards unfold on a visceral level as anomalous wildfire events, coastal inundations, and exacerbated respiratory ailments such as asthma. The sirens of the climate change newsroom have reached fever pitch, but they’ve fallen on deaf ears at the federal level.

Federal subsidy of the fossil fuel industry has resulted in human suffering due to climate change, and they are liable for the damage.

The prosecutors of Juliana vs. USA first brought their qualms to the judicial realm under the Obama administration in 2015. Their bid for trial puttered through a series of bureaucratic postponements that bled into the 2016 presidential election. Trump’s administration poses an additional hurdle for the lawsuit. The president, an outspoken climate change denier, has called global warming “a total, and very expensive hoax”, and has pursued pro-fossil-fuel policy since taking office. Just last week, his administration released plans to retract protection of the greater sage grouse on some nine million acres of public lands in the West to pursue oil and gas drilling. According to policy experts, the action would open up more land to drilling than any previous move the administration has made.

Ironically, the defendants won’t be denying the climate science, which Juliana lawyer Philip Gregory knows is airtight. Instead, they will obfuscate the link between climate change and bodily harms and contest federal responsibility for rising carbon emissions. But Gregory says that the government has known since the 1950s that burning fossil fuels could affect the climate. “They put a foot on the accelerator and ramped up fossil fuel extraction through federal leasing and opening up the Gulf and the Arctic for drilling, despite knowledge that carbon dioxide emissions could have devastating negative health effects,” he informs. According to Gregory, the global crises is the result of more than political paralysis; affirmative government action fueled the catastrophe.

The case raises some imposing questions. How will federal policies address the uncertain boundaries of climate change? What responsibility does a government bear to its citizens with respect to the climate? Gregory and the prosecutors have an answer. “The government does not have a duty to directly protect anyone; however, if it creates a danger or is a substantial factor in creating the danger, then it is obligated to protect citizens from harm,” Gregory explains. He analogizes fossil fuel to foster care. “A classic example would be the state-run foster care system. If they have reason to suspect that a licensed foster-care provider is not helping children but continue to license that provider, they would be liable for the suffering of children under the care of the negligent provider.” Essentially, federal subsidy of the fossil fuel industry has resulted in human suffering due to climate change, and they are liable for the damage.

Piper claims that Washington’s culpability is incontrovertible because “livable climate is essential to a free and ordered society.” He wants to test the clout of the public trust doctrine, which holds that the government is responsible for good stewardship of critical natural resources. The plaintiffs reason that healthy climate, a natural resource comparable to clean air or safe drinking water, is entitled to legal protection. But the potency of the public trust doctrine is already under siege; on Tuesday the EPA released proposed changes to the Clean Water Act that would truncate federal protection of vast tracts of seasonal wetlands and waterways. The plan is the latest effort by the Trump administration to rescind “regulatory overreaching” Obama-era environmental policy they claim stifles development. As the proposal demonstrates, even an established protection like the Clean Water Act is subject to the agenda of the sitting government. Federal curbing by the GOP can limit the efficacy of a “public trust” designation.

It’s unclear whether victory in court will impact global carbon emissions in the critical time-frame prescribed by the IPCC report.

Should Juliana triumph in court, the US government would be bound by law to develop a climate recovery plan. According to Piper, the plan’s content is outside the jurisdiction of the courts but will necessitate unprecedented commitment to reforestation and other carbon sequestration efforts, renewable energy subsidies, and an aggressive dismantling of fossil-fuel infrastructure. That’s a tall order of a government whose President said in October: “I don’t know that it’s [climate change] manmade…I don’t want to give trillions and trillions of dollars. I don’t want to lose millions and millions of jobs. I don’t want to be put at a disadvantage.” An adequate climate plan would entail a complete overhaul of US carbon capitalism, a radical reconfiguration that the present administration will resist with every political roadblock at their disposal. Stall tactics might include an appeal to the Ninth Circuit Court, or even to the Supreme Court and its conservative-leaning bench. Due to the ambiguity of a “climate recovery plan” and the legislatorial challenges of a polarized government, it’s unclear whether victory in court will impact global carbon emissions in the critical time-frame prescribed by the IPCC report. But every month counts on a destabilizing planet, and the lawsuit’s prompt success could mean the difference between 1.5°C of warming and 3°C. “Even if we do pass a ‘tipping point’, I won’t stop being an activist,” Piper concluded. “Even helping one community or one family is making a positive impact, and that’s enough for me.”