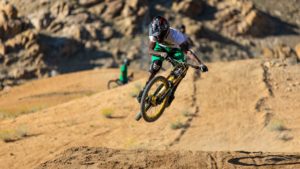 A New Home for Mountain Biking in India

The first mountain biking competition in Ladakh is a symbol for the youth culture to ride big and dream bigger.

I have come a long way from wondering what a “dual suspension” bike is, to organizing the very first Mountain Bike festival in Leh, Ladakh, my home in the Himalaya. It has only been two and a half years since I first picked a Scott XC mountain bike based purely on the brand name and the appealing neon colour. My knowledge of that bike was limited to it being just an expensive cycle. Fast forward to the present situation, where I have been tucked up in my bed for weeks due to a jump gone wrong while riding a “dual suspension” bike. My passion for this growing sport has gotten the better of me, or so it would seem.

The dream of the first mountain biking event in Ladakh was envisioned by many riders who had visited this mountainous region in Northern India in the past. Vinay Menon, India’s pioneering free-rider, who had made quite a few rounds to the Ladakh mountains in the past few years, was excited about the prospect of bringing the first-ever event to life and exposing an entirely new generation to a sport that he and I both love. Vinay honored us by getting his hands dirty to build the tracks for the competition.

Some might say the event location is on sacred ground. I acquired use of the land, which the locals refer to as “Disko Valley”, from a local monastery. Although at first glance the land appeared to be nothing more than a dump area filled with trash and shattered glass bottles, I could see past all of that to the true potential of the space. My company, which I co-founded with two of my friends Tundup Gyatso and Urgyan Skaldan, is an MTB-based travel company in Leh – hence the name Unexplored Ladakh. My colleagues and I held high hopes for the local riding culture and the sport to become something bigger. Our initiative started to gain attention when an MTB magazine from China showed interest in us and decided to support us in manifesting our vision. And to our luck, the local tourism department felt the same and decide to aid us in funding this event.

The idea was to transform this barren land into a “skills” bike park that would essentially become a playground for the locals to come to get an understanding of the sport. By making this park inclusive to all ages and genders, who hoped to aid in developing a strong MTB culture in Ladakh.

The very first mountain biking festival in Ladakh represents the changing times in Ladakh’s social structure. It is a physical representation of the changing mindset of the youth here and the possibilities of seeing a bigger picture rather than following the status quo. The main idea for this event flourished with the specific goal of encouraging the locals, especially the younger generation, to get involved in this sport and also to develop the region into a top mountain biking destination in the country.

When I first dropped in on a full-speed ride down one of the newly built trails, I couldn’t help but wonder why we did not do this earlier. We have an abundant supply of landscape that you could say is perfectly designed for mountain biking and yet any seed of a riding culture has been repressed until now. Today, preparations for the festival are in full swing with Vinay’s helpful hands and knowledge guiding us along in building the Downhill track and also a Pump track. I would have never imagined this in Ladakh.

The festival is a two-day event consisting of multiple competitions and workshops. It stands as an introductory event leading up to other prominent events this season like the Suru Boulder Fest, Ladakh Marathon and The North Quest Challenge. Next to these more established events, I can’t help but feel a little intimidated, given the fact that we are the new players in the festival lineup and also of the nature of our sport within the hierarchy of sports in India.

The first day of the event is purely based as an introduction of the sport to the locals. We also teach MTB essentials like bike maintenance and basic repair knowledge. The second day is focused more on the competition side of things with a short-track Downhill competition open to both local and outside riders, and a Pump track challenge held as well.

A glow of excitement rushes through me as I write this, as I can still picture one particular young kid riding his bike with immense joy on one of our brand new Downhill course features. I wouldn’t be surprised to see him tackling a giant, scary jump in a few years.

I personally take a tremendous amount of pride in the fact that I did not even know how to adjust my saddle post a few years back and now I am one of the first generation riders in Ladakh, which now has its very first MTB festival. This growing community of riders represents the possibility of a thriving culture in Ladakh in the coming years that I believe will take the Mountain Biking circuit in the country by storm in the next few years.

Learn more about Tenzin’s efforts to build a thriving MTB culture in Ladakh.