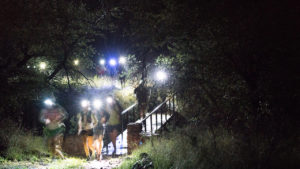 Trail running in the desert can break your body, mind, and soul, but as one priest finds out, it can also reveal new life on the other side of death.

My theologian of choice, Wendell Berry, once wrote, “As soon as the generals and politicos can predict the motions of your mind, lose it. Leave it as a sign marking the false trail, the way you didn’t go. Be like the fox, who makes more tracks than necessary, some in the wrong direction. Practice resurrection.” Those last two words make for a great mantra, and on Saturday, September 22, 2018 in the cathedral of the hills that is Davis Mountains State Park, 71 of us got plenty of chances to practice resurrection.

A race volunteer yells up to the Primitive Loop aid station, “Somebody, tell Travis I got a woman down here whose IT band has locked up pretty bad and we might have to stretcher her out.”

The Primitive Loop aid station marks mile 26 of Spectrum Trail Racing’s Sky Island 50 kilometer course. The six foot tall, surfer-haired Travis wears his Texas Parks and Wildlife uniform like an REI Instagram model, but his smile fades as he realizes he already dispatched his backcountry response team for another downed runner. Travis’s conundrum reminds us all that death and pain are part and parcel of the resurrection practice.

“It’s me, Charles. You buried my dad a couple of years ago at St Matthew’s.”

The pain began earlier that morning as the race started long before sunrise at the historic Indian Lodge. We, runners, climbed out of the camping area via the Skyline Drive trail. A slow mass of determined humanity churned up switchback after switchback illuminated by headlamps in the mist. The sound of trekking poles tinking against the volcanic rock recalled the sound of pickaxes in the hands of the Civilian Conservation Corps (CCC) who carved out the trail eighty years prior. The act of memory recalls its own kind of resurrection, and as I toiled up the mountain with my comrades in labor, I could not help but bring back to life the stories of the boys of CCC companies 879, 881, and 1856.

Through the inky cold and rain, we stumbled and strove across the balds of the Davis Mountains. Down we dove to Fort Davis, the nineteenth-century military post, and just before we bottomed out into the parade field, I noticed a plaque entitled “Fiddlers Green.” The immortalized poem began, “Halfway down the trail to hell in a shady meadow green,” and it continued with a hardscrabble description about the final resting place of cavalrymen and horses. Ft. Davis, being host to the 9th and 10th Cavalry (the famous Buffalo Soldiers), erected the plaque in their honor, but for all of us on that morning trail, it felt like a portent of the miles to come. I ran with death through the shady meadow green, but life surprised me yet again as I made my way Hospital Ridge to the Skyline aid station.

“Way to go, Padre. Keep it up!” came the voice from behind the snack table. “It’s me, Charles. You buried my dad a couple of years ago at St Matthew’s.”

Downshifting hard from trail runner to parish priest, I stammered out, “I hardly recognized you, Charles, with the beard and all. What in the world are you doing out here, and how’s your mom?”

“My wife is running the 25k, so I thought I’d help out. Mom’s been living the gypsy life since dad died, but I think she’s ready to settle down again in Austin. Here, have a shot of pickle juice, and we’ll swing by St. Matt’s as soon as we get mom settled in her new routine.” From funerals to aid stations, life continues to emerge from the valley of the shadow of death. Practice resurrection.

As an Episcopal priest, the process of resurrection takes on a particular shape for me. Modeled after Mark’s gospel, it begins with a challenging and meaningful journey with friends and strangers before giving way to a solitary and painful death. Then comes the long descent into hell, and an interminable time in the tomb. Eventually, by the grace of God, one climbs back out of the land of the dead to emerge into a new life, celebrated by breaking bread with friends and strangers once again. For me, desert trail races participate in that resurrection process.

As I finished the Skyline Loop, I turned my face toward the Primitive Loop knowing that death and the tomb laid ahead. Solitary pain thrummed in the background, but in the fore bloomed a watered desert. An ocotillo, which days before presented as a dried brown stalk of thorny torment, now erupted with fresh leaves from every square inch.   Practice resurrection.

“Never mind, the IT band lady is going to press on!”

A long, steep climb through a notch in a plateau brought me to a lush, rolling loop of Mexican Feather Grass and Little Blue Stem. For the next six miles, I enjoyed views of the MacDonald Observatory, the deeper Davis Mountains, and eventually, an opposing glimpse of Indian Lodge, glimmering in the morning dew like some far off city on the hill. My legs died on that loop as well. What began as running and power hiking gave way to power shuffling and walking. As I finished the loop, I joined Ranger Travis at the Primitive Loop aid station.

A second shout emanates from a pony-tailed aid worker, “Never mind, the IT band lady is going to press on!”

I look at Travis, raise my eyebrows, and comment, “I had an IT band lock up on me a decade ago in the hills of east TN, and they had to cart me off the course. That woman is a badass.” Travis’s affable smile returns as he shakes his head in the affirmative, also clearly relieved he did not have to radio for a second response team. Having taken my fill of Pringles, pickle juice, and water, I start back down the trail toward Indian Lodge and the finish, but it feels more like a descent into hell.

I literally hear wailing and gnashing of teeth. The young woman with the IT band, somewhere up ahead, fights through her pain and frustration in an uncomfortably vocal manner. I half expect Virgil to appear at my side to illuminate her sins because this descent feels like a missing chapter in Dante’s Inferno. I catch the IT band lady a mile later, and I give her my utmost respect and heartfelt encouragement. She manages a stoic nod, and adds the usual getting-passed-phrase of “Good job.”

Anything after mile twenty feels like time in the tomb to me, and time in the tomb moves according to its own rules. The sandy-bottomed creek bed at the base of the hill stymies my every step, and I think I’m shuffling along at fifteen-minute miles. Yet a quick glance at my watch reveals me scooting along the trail at ten-minute miles. Similarly, I feel like I’ve just eaten, but it’s already been thirty minutes since my last snack. After six hours of pickle juice and Snickers, my gastrointestinal tract waves the white flag. I force a few Gatorade Blocks past the nausea, but a reckoning awaits at the ranger station bathroom a mile ahead. I hit bottom in the bowels of the concrete lavatory. I have no idea how long I’m in that dark, silent place, but when I emerge, at least two people have passed me, including the IT band lady.   Practice resurrection.

Practice has never made me perfect, but it has always made me better. Practicing hill repeats every Wed morning gives me the strength and confidence to take on the final two thousand feet of elevation change on this course. Practicing the little resurrections in an ultramarathon gives me the strength and courage to take on the rest of life. Loved ones die, communities wither, and carefully crafted plans go down the drain. The best way I know to bounce back from those moments is to practice resurrection, to talk to aid station workers, to notice ocotillos, and to eat a snickers before the home stretch of the Indian Lodge Loop.

I pass the IT band lady again on the final descent, once more acknowledging her iron will. A rudimentary arch in the service lot of Indian Lodge marks the finish line. Someone rings a cowbell as I come down the final stretch, while kids and dogs look up from their play to cheer me across the line. There are no medals or corporate sponsor gift bags, just a hard-earned trucker hat for my efforts. I kiss my wife and high five some of my running club friends. Looking around, I smile at the scene. It’s not exactly broiled fish on the shores of the sea of Galilee, but this post-resurrection experience isn’t far off. I gather with friends and strangers for some wood-fired pizza and swap miraculous stories. The IT band lady, Oksana, finishes ten minutes later. Practice resurrection.