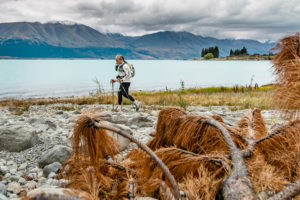 Running For My Son’s Life

The doctors told this family there’s nothing that can be done. This father doesn’t agree, and now he’s running for his son’s life, proving the impossible is possible.

Duchenne muscular dystrophy is a rare muscle-wasting disease that is 100% fatal. Because the disease is so rare, funding to find a cure is practically non-existent.

“If I can get through a race that I’m told I’m not supposed to, or I shouldn’t even be at the starting line, it helps give me a mental advantage to take on a disease that has never been cured before.”

Jim wears his heart on his sleeve, and his son on his shoulders.

After suffering a heart attack during Jim’s second attempt at completing the 170 mile (273 km) ultra race at the Grand to Grand Ultra in September 2017, Jim was determined to complete the race on his third attempt. The following year, Jim headed back to G2G where he finally accomplished his three year goal. After seven brutal stages Jim crossed the finish line with his son, Jamesy, on his shoulders.

In 2013, Jamesy, was diagnosed with Duchenne muscular dystrophy. When the Raffone family learned of Jamsey’s terminal diagnosis, the doctors told them that nothing more could be done to help them.

That was either the right thing or the wrong thing to say to the Raffone family. Instead of listening to what the doctors told them, the Raffone family has been doing everything in their power to raise awareness about this deadly disease, and ultimately help to find a cure.

The ultra community is a niche community. It’s also an international community. Michael Sandri, the founder of the Alps 2 Ocean Ultra in New Zealand had met Jim while participating in the Grand to Grand Ultra in 2016. Sandri was constantly being asked by other participants, “Why isn’t there an ultra in New Zealand”. He couldn’t think of a good reason why New Zealand doesn’t host an ultra race. With the help of family and friends, he created that race.

Sandri invited Jim to participate in the race’s second annual run. This was an opportunity to spread the word about Duchenne around the other side of the planet. An opportunity that was far too great for Jim to refuse. Even if it meant not having sufficient time to train for the epic 200 mile (323 km) race.

The Alps 2 Ocean Ultra begins at the base of Mount Cook. The course skirts along alpine lakes and ascends up countless mountain ridges and foothills. Eventually descending into the low lying valleys, the course finishes along the shores of the Pacific Ocean.

“Every person who talks to me or asks me about ultra running, I always tell them about JAR of Hope and Duchenne muscular dystrophy.”

Fellow JAR of Hope teammate Bill McCarthy, another Grand to Grand participant, fundraised in support of JAR of Hope. Supporting them in their mission to find a cure for Duchenne. McCarthy had heard about Duchenne for the first time when he saw Jim running at the Grand to Grand Ultra in 2017. Bill was shocked to learn about Duchenne and he thinks about the Raffone family every single day. “What makes Duchenne so unique, is the lack of support and funding from governments and pharmaceutical companies because it’s such a rare disease.”

Despite the support, Jim encourages his teammates to “run their own race”. Fundraising and supporting JAR of Hope before the race is welcomed. Once the gun goes off, that’s all for them.

“why would someone spend almost 30 hours out there on a course? Then I’m able to tell them about my son’s story”

The elite runners at the front of the pack would complete the long stage in just over 10 hours, after 54 miles (88 km) and a ton of climbing, Jim estimated it would take him nearly 30 hours to run the same route. This isn’t about competing for Jim. It’s about a platform. It’s an opportunity to continue raising awareness about Duchenne. “It’s not about being a ‘competitor’. At that point, it’s all about the admiration for this fellow human being and what they’re willing to put themselves through. Then they want to know why, why would someone spend almost 30 hours out there on a course? Then I’m able to tell them about my son’s story.”

After running through the night and making one last epic push over a nearby mountain, darkness eventually turned into dawn. Michael Sandri stayed awake through the entire night to ensure he could greet every last participant coming in from the long stage. Sandri greeted Jim with a hug as Jim finally came into camp from his 27 hour day.

Sandri relayed a message from Jim’s family, “One checkpoint at a time captain”.

There would still be many checkpoints to go after the long stage. However, surviving the long stage was a huge victory. The hardest part was over, theoretically.

It’s Not Over Until It’s Over.

The next day was even tougher. There was almost just as much climbing but in a much shorter distance. The climbs were steep and brutal. The time cut-offs were also considerably more strict, so the runners had to be quick.

This race would be tough for Jim, all the way until the end. The end did finally come through. 7 days, 200 miles later, Jim had finally run over the finish line in the small coastal town of Oamaru. The crowd of spectators, participants’ families, and locals, all cheered on Jim as he crossed the finish line. Jim running with his JAR of Hope flag in the air.

It took everything he had to cross that finish line. Yet, he somehow mustered up the energy to steal the crowd’s attention for just a little longer. Standing underneath the finish line banner, Jim had shared his son’s story.

The story isn’t over yet. Jim is on a mission to grow his JAR of Hope team, to bring them back to the races he has already run. Jim hopes to take JAR of Hope and his son’s story to Ultra races on all 7 continents.

To learn more about Duchenne muscular dystrophy and JAR of Hope, visit https://jarofhope.org/