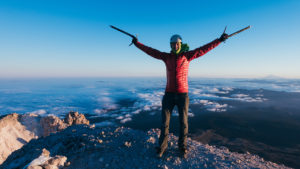 Colin O’Brady: The 50 Highest Points in Each US State and Another World Record

It is 2:54 a.m. on July 19, 2018, and Colin O’Brady set a new world record. For 21 days, Colin non-stop travelled and climbed with his sights on achieving the fastest time to summit the highest peak in all 50 states in the U.S. Standing atop the summit of Mt. Hood that morning, he officially achieved his goal.

Drought. Lightning strike. Grueling 26-hour climbs. Multiple climbs per day. Colin O’Brady battled it all in an exhilarating 21-day race against the world clock to climb the tallest peak in all 50 states across the U.S. The 13,000-mile cross-country trek came to a close when O’Brady summited Mt. Hood in his hometown state of Oregon. The Portland native was greeted by friends, family, enthusiasts and locals who cheered on O’Brady in support of his goal.

In total, O’Brady walked, ran, hiked and climbed more than 300 trail miles, beating the previous 41-day record set in 2016 by 20 days. On two separate occasions, O’Brady had to skip a peak and come back to it later due to restricted access and unsafe weather conditions. Arizona’s Humphrey’s Peak was temporarily closed due to fire danger caused by lack of rain to the area and Mt. Whitney, California’s high point, was closed due to a lightning strike that caused a forest fire. The final week of this world record attempt in the Pacific Northwest was especially strenuous due to extreme elevations. O’Brady climbed 150 miles across 8 peaks in just 7 days, with no single peak falling below 11,000 feet.

O’Brady was eager to welcome people to join him on the trails or via social media. He often took to Instagram to share his progress and encourage followers to explore their own backyard and celebrate public lands. He received some extra special support from his Dad, who joined him on four separate climbs to celebrate his 60th birthday. Fitz and the Tantrums Drummer, John Wicks, joined O’Brady in Montana to tackle the 12,799-foot Granite Peak. The Missoula native is a personal friend of O’Brady’s and also an ultra-marathon runner and avid mountain climber.

“Nothing can really prepare you for the sheer exhaustion and physical strain that this kind of rapid push creates,” said O’Brady. “It was an ambitious goal, wanting to knock out all 50 peaks in just 21 days. But it really does take a village. I’m beyond grateful for my family and friends, and the much-needed community support at each stop. I also owe a huge thanks to Standard Process and their new Nutrition Innovation Center for both the preparation and the supplement regimen they put me on in the months leading up to the challenge. It put me in a great place to begin this journey and allowed my body to recover properly along the way. Without their support, I think I’d still be somewhere on Gannett Peak right now!”

As the exclusive nutritional supplement partner, Standard Process worked with O’Brady to prepare his body to meet this rigorous challenge. Dr. John Troup, PhD, Standard Process Vice President of Clinical Science, Education, & Innovation, led the clinical team at the Standard Process Nutrition Innovation Center (NIC) to run a series of state-of-the-art diagnostic tests to determine the exact nutrients O’Brady needed. The Center is the only active clinical research center of its kind, dedicated to both mid-and long-term support of whole food clinical nutrition.

“We’re so excited to be a part of Colin’s monumental achievement,” said Charlie DuBois, Standard Process President and CEO. “Colin O’Brady is not like a lot of people in this world. He pushes himself to accomplish the seemingly impossible, and then he’s on to the next big goal. We’re inspired and we’re proud to be part of his nutritional journey to peak health.”

Standard Process continues to support Colin as he pursues his fourth record, The Shackleton Expedition. Also known as The Imperial Trans-Antarctic Expedition, Colin is now undertaking an unsupported and unaided 1,000-mile solo trek across Antarctica’s icy terrain in frigid -40°F temperatures, gusting 58-mile-per-hour winds and total daylight – unable to re-supply, use wind aids or have human contact aside from a daily safety-check phone call.

In order to embark on this extreme adventure from November 2018 through January 2019, Colin needed to be in peak mental and physical condition. As part of the Standard Process sponsorship, NIC staff worked closely with Colin to develop a whole food-based supplement plan that further enhanced his own nutritional plan. This included developing nutrition bars for Colin to consume alongside his primary caloric and nutritional intake during the challenge.

A lifelong user of chiropractic care and Standard Process supplements, Colin is fueled by passion and excellence, inspiring others to embark on their own journey to peak health, no matter how big or small.

Born on an organic farm in Olympia, Washington, Colin is a lifelong advocate and user of chiropractic and acupuncture services. He did not begin his athletic life as a mountaineer chasing world records. In high school, he excelled in both swimming and soccer and was eventually recruited to swim competitively for Yale University. After a near-death experience in 2008 where he suffered severe burns to nearly 25% of his body, he came back 18 months later by winning the Chicago Triathlon’s Amateur Division in 2009. This led him to return to the mountains and launched his career as a professional endurance athlete. His world record achievements also include an Explorers Grand Slam speed record and a previous Seven Summits speed record.

Standard Process is guided by the whole food philosophy of its founder, Dr Royal Lee. Dr Lee’s goal was to provide nutrients as found in nature, where he believed their natural potency and efficacy would be realized. Today, Standard Process proudly carries on Dr Lee’s legacy and regularly grows more than 80 percent of the raw plant ingredients found in its products on its certified organic farm in Palmyra, Wisconsin. Using state-of-the-art manufacturing processes to retain vital nutrients within each ingredient, Standard Process manufactures its supplements in its NSF International-certified facility. Standard Process employs high-quality control standards and follows the U.S. Food and Drug Administration’s good manufacturing practices. For more information, visit: standardprocess.com