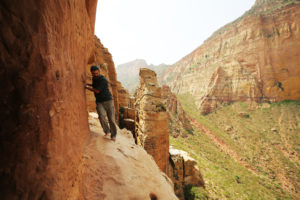 Stories From The Sahel: The Sky Church at Abuna Yamata Guh

Reza Pakravan recounts a climb in Ethiopia to find a church built into a cliff face, decorated with amazing murals and well-preserved scriptures from the 6th century.

Over the coming weeks, Reza will recall stories from the region. The story below is a follow up to Reza’s first of the series, Trekking the Dogon Country in Mali and Lake Chad, at the Cross-Section of Chad, Niger, Cameroon and Nigeria

Abuna Yamata Guh is a place that I will never forget. Hidden in the remote mountains of Gheralta in northern Ethiopia, Abuna Yamata is a monolithic church built on top of the rocks and carved into the side of a cliff above a staggering 250-metre drop.

The road to the church snakes through the epic Gheralta Mountains. The scenery was beyond description and the mountains featured the most incredible rock formations. We got to the foothills. The road stopped. The climb started. The mountains were epic and magnificent. A Coptic Christian priest makes an incredible journey there every day, climbing sheer, steep cliffs barefoot and without a rope.

We started the challenging climb and after 45 minutes we made it to the cliff. I was a bit under the weather, but the incredible sceneries, fresh mountain weather and a surge of adrenalin perked me up. While climbing I was thinking to myself: what must go through someone’s mind to compel them to build a church in the side of the cliff?

When we reached the cliff I was asked if I wanted to climb with a harness or not. I opted for the harness. A hair raising vertical free solo climb wasn’t for me.

I started climbing with guidance from the locals. Then the priest arrived and waited a bit while I climbed. Since I was taking so long to climb, he decided that he wasn’t having any of it and started to climb up to me using footholds. He was unbelievably fast, reminding me of Alex Honnold free-climbing El Capitan. He overtook me with laughter. Without safety equipment, he climbed so quickly. It was no wonder – he had been doing this climb for 40 years.

“You have to put your feet in exactly the place I am telling you, and grip where I am pointing,” my guide said.

With a bit of guidance, I finally climbed the first wall. The second one followed, which was a bit easier. But then, thinking I was done with the scary parts, I had to endure a ledge on the cliff-face above a 300 metre (980 foot) sheer drop. It was so nerve-wracking that I could hardly breathe.

I finally made it to the church and met a smiley priest. The church was richly decorated with amazing murals that depicted the lives of the nine Saints. Well-preserved scriptures from the 6th century written on goat-skin (with the cover made of cow-skin) were kept in perfect condition, thanks to the low humidity and the shelter from sunlight.

As the sun began to set, I sat on top of the cliff overlooking this incredible landscape, thinking about the experience of this hidden gem in Ethiopia.