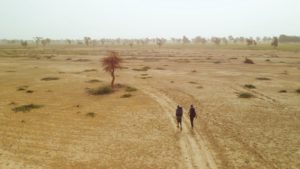 Stories From The Sahel: Trekking the Dogon Country in Mali

In the first of the series Reza Pakravan takes us to some of the best, but also toughest hiking trails in the world, climbing sand-washed mountains with the beating sun on his back. 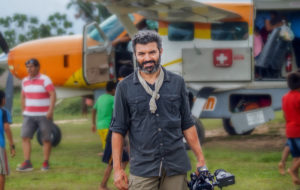 Over the coming weeks, Reza will recall stories from the region. Below is the first.

Trekking in the Dogon country in Mali

The Dogon country perhaps offers some of the best hiking trails in the world, but climbing sand-washed mountains with the beating sun at the hottest time of the year was not an easy task. However, all I needed to do was turn and face the valley overlooking the orange desert, with sporadic trees dotted about, in front of me to appreciate the beauty of this forgotten land. There is no shortage of surprises in the ancient land of Dogon people. I was trekking along an old path and up and down cliffs when I came across red paintings on the rock wall. It looked like something out of a movie set. My guide showed me different paintings and told me about their meanings in Dogon mythology. For example, there were many drawings of the crocodile. Crocodiles are sacred in the Dogon country. When the Dogon people escaped Islam and found refuge in this incredibly inaccessible land to continue practising their own religion, crocodiles showed the Dogon people where to get water, which is why they are sacred and the Dogon people don’t kill them.

The villages we passed through, many of them perched on cliff tops, each had a story to tell. Upon arrival, permission from the Chief was needed before entering and we often met him in the village Toguna. A Toguna is a low-roofed structure built with stone and timber and is usually found in the centre of every Dogon village. It is where the Chief and the village elders sit and settle disputes and the low roof is made with the express purpose of forcing visitors to sit rather than stand, which helps avoid violence when discussions get heated.

As well as Togunas, the villages built on escarpments had mud-built granaries dotted around. The number of granaries indicated the number of women living in the village, for each woman has her own, in which she stores food for her family. Unlike the rest of Mali, women in the Dogon country are economically independent and earn and spend their own money.

Reza’s theatre tour with the RGS begins across the UK this month and runs into 2020, whilst the new TV series will be broadcasted in the winter of 2020.