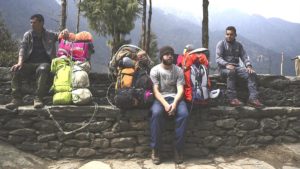 The Porter: The Untold Story at Everest

A young privileged American attempts to make history at Everest but experiences a harrowing reality instead.

Nathaniel James Menninger, a young privileged American, attempts to make history at Everest by becoming one of the first foreign-born porters to support an Everest expedition. But in doing so, experiences a world far over his head. This is an inside look at the darker side of Everest. At the strength, pride, and pain of those who support it. And at just how hard it is for a naive foreigner to attempt the same. This is The Porter.

For the past five years, Menninger pursued a career that didn’t really exist. Trying and attempting and forcing himself into the most outlandish places, cultures, and experiences that he could. To attempt things as a professional would, and to push himself to the brink while doing it. Naively, with as little research as possible. He wanted to do everything. And the craziest of everything. So he tried to build his life around this concept. Slowly graduating from the physical to the mental and cultural, until finally, he was getting so out of hand, so over-the-top, that he convinced himself he wouldn’t do another “project” without proof. So after losing four jobs in a row and failing to impress some big Hollywood execs with writing, he decided to shoot for visual proof instead. Shortly after, he left the US to attempt what would become his most immersive experience yet: becoming one of the first-ever foreign-born Porters to aid an Mt. Everest Expedition — a combination of all three.

Menninger told The Outdoor Journal, “Eating, sleeping, dressing, speaking and working, I immersed myself in the job as deeply as I could. Not showering for 23 days, losing 20 pounds and carrying 100 kilos, we captured the entire attempt on camera  But in doing so, walked into a reality far over our heads. And since then, have documented it all in a film. What followed all but derailed my sense of the world. And in the months after, I grappled pretty heavily with my experience. My hope now is to share part of why in The Porter.”

This film is a rare look into life at Everest. Into those who’ve made possible a pilgrimage to Earth’s most notable monument. And into the greater issue that affects all related. This film hints at the growing tension between those who visit and those who live there. And at a world that deserves global attention. This is Everest today, and what makes its summit possible.

PRESS: This fall, The Porter, will be touring to over 25 Universities and communities throughout the world, and in recent months, The British Mountaineering Council, UK Climbing, Arc’Teryx, Climbing Magazine, and the The UIAA, or the International Climbing and Mountaineering Foundation, have all supported this film and its message.