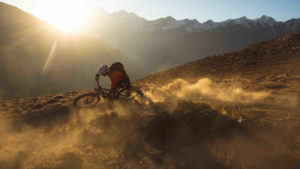 What Does Fear Mean to RJ Ripper, the 2018 Adventurer of the Year?

Globally known and admired for his prowess as a mountain biker, Rajesh Magar shares his approach to managing fear and evolving.

Rajesh Magar, “RJ Ripper” or just “RJ” to his friends, is a name that not only the people of his native Nepal know well, but also the adventure sports community around the world. This was solidified when Rajesh recently became the 2018 Nat Geo Adventurer of the Year. Rajesh is a star mountain biker from Nepal, who built his own bike from scratch, before pushing it to the limits and attracting the globe’s attention.

“One should have fear. It’s a good thing,”

In Joey Schusler documentary entitled RJ Ripper, Mandil Pradhan of H+I Adventures referred to Rajesh as “A kid from Nepal is taking on the world.” That world has grown to not only admire his ability, but for also making the most of the opportunities available to him given the humble context. If you need to give yourself an introduction to Rajesh, RJ Ripper is a powerful and hugely inspiring film that tells his story. It can be found below.

More than anything else, RJ’s attitude has been such an important factor in his success as a mountain biker. The commitment he has demonstrated has been well covered, however The Outdoor Journal wanted to talk about something else. We reached out to him about the role of fear in his story, what kept him going back for more, and how he could push himself so hard, on a bike that he had built himself from scrap metal.

In Rajesh’s life, limits have always been evident. From the outside, breaking those limits often required a disregard for fear. However, according to RJ, that is not the case. Throughout his life, fear has always been there, he’s just taken it in his stride. “One should have fear. It’s a good thing.”

When Rajesh’s mother brought home a bicycle, he didn’t know how to ride it. Grateful to receive one, he simply taught himself how to ride. “When I started to try and ride, I would take the bicycle on the main road everyday. I would try, and try again, to stay on my wheels, but fall again, and again. At the time, I wasn’t great at turning, so I fell many times. Of course, there was also an additional risk of cars that could hit me. Therefore, I instead went off road to try and learn how to ride the bicycle,” Rajesh recalls.

With friends, Rajesh would ride around Kathmandu and compete with them. At times they noticed other cyclists performing stunts on the street, so Magar and his friends would visit cyber cafes to pick up tips from online videos. When he wasn’t riding, Rajesh would regularly sit and observe mechanics working at a local cycle shop to figure out how he might customize bicycles for himself. That’s what being a self-starter is all about.

“I thought, ‘If they can do it, we can do it too. Let’s try.’ I learnt how to make a cycle, how to fix a puncture, how to change tyres, and how to install brakes. I then started trying that on my own cycle, by removing and adding parts. When I did that, the cycle started looking smaller, so I’d do things to make it bigger,” RJ explained.

TACKLING FEAR AND INSPIRING OTHERS

Rajesh wasn’t looking for fame, fame found him. Joey Schusler, an experienced mountain biker and documentary filmmaker, met Rajesh while visiting Kathmandu. The two immediately hit it off during a tour with Mandil Pradhan’s H+I Adventures, and this relationship inspired Schusler to film a documentary aboutRajesh Magar’s story.

When asked about RJ, Schusler immediately jumps to fear, and his admiration for the way in which he faces it. “Magar has his head on pretty straight, and is very aware of his skill-set when riding. He knows the level he is at, and understands that it takes time to slowly progress and move past his fears to each new level. He never seemed too scared when we were riding and filming together.”

“Fear plays a big part in mountain biking. It is what keeps us in check, so we don’t try to progress too fast.”

RJ progressed slowly but very effectively, continually building confidence. When RJ started to compete, the goal was winning, and speed was necessary to win. However, this was a skill that required much patience and repetition to master. Much of his training was pursued alone, repeating routes and timing himself again, and again to improve his speed. Each time he would tinker with his approach by keeping a check on his balance. “I would take it section by section, and once I was comfortable on the tracks, I’d tackle speed. Where I wouldn’t be comfortable, I would go slow and try a few times until gaining speed and then it would work.”

RJ does not disregard fear, as you might expect. In fact he pays a lot of attention to it. “If you just go for it, anything can happen. I made that mistake but I’m still alive, I’ve learnt from experience. Of course, there will always be moments when I think, “wow that was a close call! Thank God, I survived.’ This is always the way in adventure sports, there is always a risk, but good things can happen too,” RJ says, with a smile.

Only a few know how to actually handle fear that way.

Whilst shooting the documentary, Schusler was aware of RJ’s measured and intelligent approach. “He’s such a natural on the bike. You can tell that he is just at home and full of comfort when riding it. His focus is so good, and he’s so dedicated to his craft,” Schusler told The Outdoor Journal. “Fear plays a big part in mountain biking. It is what keeps us in check, so we don’t try to progress too fast,” he added.

Perhaps this is the thing that really sets RJ apart from the rest, the know-how to manage fear. RJ makes a conscious choice. The good thing is that it can be taught and it’s infectious, when others see this approach, they often adopt it for themselves. RJ is in a position to spark change within an entire community.

“Some would watch me and think, ‘wow that’s amazing, he did it.’ Some would be discouraging, but I wouldn’t pay attention. My purpose is to demonstrate that  you can do anything if you’re prepared to offer complete dedication. Once inspired, people can do great things and further inspire each other.”

LIFE AS THE ADVENTURER OF THE YEAR

All these years of learning how to handle fear in a productive way has added a huge amount of value to RJ’s life. The world now knows about his talent, and he feels humbled by that unexpected fame. More than anything else, RJ is happy to just be.

“As of now, everything is good. I’ve got work, friends, family, and everyone is happy. My family and friends are happy because of what I’ve become, and I’m just happy with that. I haven’t yet thought about anything else apart from this. I never expected any of this,” RJ says.

For five years now, since his meeting with Mandil Pradhan, RJ has been leading tours and is the head mechanics at H+I Adventures. It’s via this role that RJ met the founder of AT Cycles, who was inspired by his story and made the offer of brand ambassador.

Since RJ now represents Nepal, he is no longer mountain biking just for fun. It’s a huge responsibility that he takes very seriously, but we’re pretty sure that he’s still having fun too.

“People have different expectations. I often hear things like, “You will have to win, bro”, meanwhile others will still just say “Hey, go have fun!” he laughs. “More than anything else it’s a good feeling to know that I’ve done something for others, and perhaps made them see that they can do it too.”

RJ is grateful to all the people who supported him in his endeavour of mountain biking. Whether it was with their words or by offering the materials that he needed to pursue his passion. The future? RJ plans to cycle until the day his body stops allowing him to do so, but more than anything else, simply wishes to do something meaningful with his life. For the next five years, he plans on participating in racing championships, but that’s not a life-long goal.

“I want to race with the fastest mountain bikers in the world. I just want to see where I stand among the fastest riders. But as far as cycling goes, I’ll never leave that and keep it with me for as long as I have life inside of me,” he says.