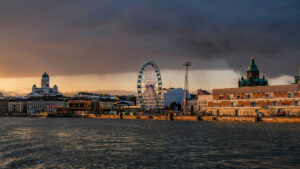 Finland's goal to reach climate neutrality within the next 15 years requires a sustainable energy transition, but the country is still in denial about the harms of peat extraction.

This article is the third part of a series entitled Finland’s Dirty Secret. In Part 1: Extracting Peat for Energy, we learned that peat isn’t just mud, it’s also a carbon-heavy fossil fuel, and the opening of a new state-owned power plant shows that Finland is in denial over an industry that can harm the climate more than coal.

In Part 2: Political Controversy, we discovered how Finland’s political infighting eclipses the fact that this otherwise forward-thinking country continues to rely on peat, an outmoded fossil-fuel, as a source for energy.

Since these updates, the Finnish Association for Nature Conservation, the largest non-governmental organization for environmental protection and nature conservation in Finland, has begun a virtuous campaign to urge the government to end peat extraction and preserve the country’s world-renowned water.

Yet, there is plenty of denial within the industry, ranging from farmers to boardrooms and into parliament. Internal political queries cause the stagnancy of peat being discussed openly. The small number of a couple of hundred peat farmers and their seasonal workers amount to no more than roughly 2000 people, all voters of the currently ruling Center party. Even though the peat industry can only survive on a 200 million Euro tax relief per year, it makes a few individuals the winner of a dirty game.

For example, there is a new growing business in Findland’s peatlands. The greenhouses now often use peat but the new business is to extract the uppermost layer of peatlands (peatmoss) for the same purpose. The problem is that the extraction of peat needs a permit from local environment authorities but the extraction of the uppermost layer, sphagnums, does not. This loophole needs to change because the effects on nature are substantial, (albeit less than in peat extraction.)

Apparently, the Center party vote is strong enough to catapult the decision within parliament to set peat up to standard with coal – the latter being banned from production for energy by the year 2035. This is supposed to ensure Finland comes closer to its ambitious target of being the first fossil-free nation in the world. However, this goal does not account for emissions courtesy of the peat industry – a major source of energy in Finland, especially via small scale power stations used to provide energy nationwide. Smaller-scale power stations are especially problematic, as they run on wood and peat. It is costly to turn them into sustainable energy-run factories, unlike some of the bigger stations, and so far, there is a lack of understanding regarding their contribution to carbon emissions.

The government continues to search for new sustainable energy resources. These include biogas, solar, and wind power, but the question remains whether any of these solutions will replace the energy required and currently provided via coal and peat burning quickly enough. Meanwhile, there are ever-increasing energy demands in major cities such as Helsinki, Turku, and Tampere.

To move closer to compliance with the actions recommended by the recent IPCC paper from November 2018, addressing climate change in particular, Finland should set a positive example. Its importance cannot be understated, as Green Party politician Satu Hassi puts it, “For the climate, peat is even more harmful than coal. The burning of peat includes the wet material that needs a great amount of energy for the drying process. Therefore you produce more CO2 per [unit of] useful energy with peat than with coal and it is evident that peat burning must end.”

Amidst the coronavirus crisis, Minister of Corporate Governance, Tytti Tuppurainen proposed that the burning of peat could be given an extension in order to ensure that Finland’s energy supply does not run out, forcing the country to rely on foreign energy sources. However, Ilkka Savolainen, Research Professor Emeritus, Helsinki believes that it is possible to replace peat with other developing domestic energy sources, therefore, it would not weaken Finland’s security of supply to eliminate peat use during the pandemic.

Since the start of this series, the Finnish government indeed increased the taxation of peat this year (almost doubled), however, the taxes of fossil fuels in heating went up generally, so the relative tax relief of peat did not really diminish. Overall, burning peat will become more expensive at the beginning of 2021. There is also a new floor price for peat (a bit like for coal in the UK) to ensure that if the price of carbon in the EU/ETS goes down, this would not affect the price of burning peat. There will likely be new legislation on this subject next year. Thus, it is fair to say the environmental campaigns have already had some impact on policymakers. Still much remains to be done to end the burning of peat altogether in a timeframe that allows Finland to do its fair share of limiting global warming to 1,5 degrees.

Even with Finland’s national goal to reach climate neutrality within the next 15 years, an ethical and sustainable energy transition may be possible. According to Sitra, employment in the peat industry accounts for 0.1 percent of the Finnish workforce and the share of added value produced by Finland’s economy is less than 0.1 percent. A shift in focus to developing domestic systems in geothermal, biogas, and renewable electricity, for example, could potentially maintain Finnish energy resources going forward without depending on foreign sources. The European Union’s Green Deal even provides funding to support Finland’s sustainable transition. This climate imperative will likely require new technologies that create new jobs and know-how and lead to greater energy efficiency nation-wide – which are all fantastic assets to the Finnish economy and people.

Read more about the controversy: