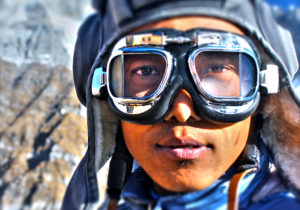 The Flying Prince of the Himalaya

This is the story of how an adventurer is made.

Sano Babu’s life has been anything but ordinary. In the words of Khalil Gibran, his experiences have taken him “through the secret route between the shores of the oceans and the summit of the highest mountain.”

Two young Nepali men stood atop the wind-battered, frosty pinnacle of Everest. Then they jumped off it. Held aloft in thin air, icy drafts swept up the gossamer wings of their canopy to 9,000ms. They circled back over the summit of summits, taking in a breathtaking aerial view enjoyed by only a few aviators.

Arriving on solid earth five thousand meters below, the duo went on to an transcendent odyssey: outwitting homeland security forces, they hopped into a wild, Himalayan-fed river, passing jungle swamps on a tandem kayak, and nearly drowned before arriving at scorching floodplains in India. Robbed of cash and supplies, living off the land, they still survived without gear and slogged by kayak the Bay of Bengal.

The mind behind this odyssey, the Summit to Sea, was Sano Babu.

Stone-broke, Babu and his partner Lhakpa relied solely on their wits and instincts for this staggering journey. They found themselves well-rewarded when National Geographic selected them as Adventurers of the Year 2012. Voters agree the duo out-adventured weekend-warriors to pros alike because of their valiant feats. For comparison’s sake: remember Felix who leapt out of an atmospheric capsule, breaking the speed of sound with his own plummeting body? He was awarded Nat Geo Adventurer of the Year 2013.

Babu’s financial conditions have since improved. Surrounded by trilling birdsong and emerald paddy fields of Nepal’s mid-hills, he tells us he is building a rural resort with an adventure school.

I’VE GOT TO GET OUT OF HERE

Named “Gold River” for its shimmering hue when sunlight reflects off it, the Sun Koshi unfurls like a golden carpet seen when from the hillsides above. It was over this liquid yellow brick road that Babu and Lhakpa embarked on Summit to Sea.

Babu recalls when he had dived into the river with a schoolmate to ride a stretch of roaring rapids. He had a small banana tree for flotation, while his friend Tirtha used a stalk of bamboo. Thirteen-year old Tirtha did not survive the churning waters; Babu himself narrowly escaped. The rapids, he estimates, were class four and above.

His childhood was unorthodox training for Babu, who now has 32 first descents of Himalaya-fed rivers under his America’s cup paddle.

“Babu” means baby, to which his granddad added “Sano” (small), reasoning he would not grow up to be tall, after a gecko jumped clear over the lad when he was five. Packed into his 160 cm (5’3”) frame, this “small baby” now has the spirit of Goliath. “He’s a bird without feathers,” says friend Luc DeNies. “He has the gift to read aerial conditions, to be in the right place at the right time.”

He may have had an early start. As a child Babu snuck up on a Himalayan Griffon gorging on a carcass, clutching the thick legs of the bird. Griffons have a wingspan up to 3m (10ft) and Babu was less than 25kg (55lbs). He was dragged along on the ground as the panicked griffon beat its massive wings, lifting off. He bounced over a few terraced paddy fields before letting go, his first ever tandem flight nearly killing both pilot and hijacker.

“I was trying to fly before I knew about planes! Since I can remember, I wanted to do something that had never been done before. I’ve always felt a little mad, you know, not stupid, but a little crazy,” he says through a grin.

Babu created adventures where none existed. He shocked his parents when he attempted a leap from one tree-top to another. He fell to the ground, breaking a leg.

“You don’t challenge Nature,” says an older Babu. “If you respect Nature and try to understand it, then most of the time, you find success”.

Thirst for adventure propelled Babu, who remembers thinking, ‘I’ve got to get out of here, I don’t want to be a farmer all my life.’

He eventually drained his village dry of adventure and set out for Kathmandu. As a teenager of fifteen, he found the city overflowing with people just like him: people from isolated hills seeking a different life. A garment factory kept him overworked but fed for a month.

Despite Nepal’s anemic economy, tourism provides jobs in the high season. Babu soon escaped the sweat-shop for a position with a leading trekking company. Starting as a porter and kitchen assistant meant hoisting loads up the highest hills and down the steepest terrain on the planet; but he was happier to be outdoors facing the wind and the sun. Despite a hard trek in the Annapurna region, a greedy supervisor denied Babu his pay, and he found himself hitching a ride to Pokhara.

A quasi-Shangrila for tourists, the lakeside city of Pokhara is where fortune finally smiled: Babu landed his dream job with a local rafting company. In his free time, he was at liberty to kayak on the nearby Phewa Lake. Less than five years after leaving his village home behind, he was titled Nepal Kayaking Champion. In the competition he had a fateful meeting with another kayaking enthusiast David Arrufat, also an ace freestyle paragliding pilot.

Paragliding was far beyond Babu’s budget, but David offered him a free tandem flight. After the exhilarating ride Babu knew he had found his calling. In early 2006, Babu accepted a job at David’s paragliding company Blue Sky. The job began with a fifteen-day introductory, paragliding course. Babu’s experience on the rivers served him well; air and water have a lot in common, he says, “their flows are often mirror images of each other.”

As with water sports, Babu excelled in the air rapidly.

His wanted to let the world know of Nepal’s natural attractions, and often fantasized of a multi-adventure journey through water (rafting and kayaking), land (climbing) and air (paragliding). And so Summit to Sea was born.

In 2010, Babu put his brainchild aside, embarking on a record-breaking, tandem paragliding journey across Nepal! During the month-long trip, his thoughts returned again and again to Summit to Sea: he needed a capable partner to lead the climb.

Far away in the Khumbu highlands, Lhakpa Tshering Sherpa was musing, too. A seasoned mountaineer, Lhakpa wanted an easier way down from the frost-bitten peaks. Flying was a whole lot better than trudging down the same way with danger at nearly every footfall.

Lhakpa turned to the idea of paragliding, and made a few botched attempts at self-schooling with a borrowed wing. He then went to Pokhara and wandered into Blue Sky to ask about flying off summits. Lhakpa had already been on ten Everest expeditions, summiting three times: Babu’s search was over.

Convincing Lhakpa was easy. Yet two major complications loomed as large as the towering peaks of their homeland. Lhakpa had no paragliding skills: it would take years for him to learn to fly at elevation. Also, Babu had never worn crampons.

An ad hoc agreement was made: Lhakpa would get Babu on top of Everest, and Babu would take over from there. This crucial partnership was made a mere two months before setting off to climb earth’s highest peak. Mountain Blackstone donated warm apparel and Niviuk donated a high-performance glider. They managed everything else on their own.

Babu’s first task was monumental: a freezing tandem flight off the top of the world.

Everest was to be Babu’s starter peak. He experienced altitude sickness at Base Camp and took morning jogs between Base Camp (5357m/17,575ft), and Gorak Shep (5184m/17,008 ft) to acclimatize. Although Babu was propelled by his excitement, the difficulties became harrowing. Around 7600m (25,000 ft) near the famed Yellow Band, a portion of their oxygen supply was stolen. Without extra oxygen, there would be no margin for miscalculation.

Circumstances were grim, they knew. They plodded on to the freezing summit where Lhakpa gave Babu’s near-empty cylinder a final blast. He unpacked the high-performance wing. Without backup oxygen, there was only one way down to safety. Paradoxically, it was also one of the most dangerous jumps.

Three thousand meters of free-fall to the glaciers of Tibet awaited them if it went wrong. Launching off the roof of the world, Babu called to mind the hundreds of take-offs he had near Pokhara while working at Blue Sky. “Be calm,” he thought, “This place is just like Sarangkot.”

Once airborne, bearing north above Tibet, an updraft allowed them to rise and pass back over the top of Everest. They headed south toward Namche Bazaar, 30 aerial km south. The flight lasted 45 minutes before they touched down at Syangboche (3720m) an abandoned airfield above Namche. Despite the remote location, news traveled fast. The army was soon asking for duo by their names, checking Nepalis at gunpoint in Jorsale, a small hamlet along the Dudh Kosi (Milk River). With no official sanction for their flight, the duo left their wing in Namche and slipped through without discovery.

Babu had previously approached both the Civil Aviation Authority and Nepal Tourism Board for permission. Authorities deemed it technologically impossible to fly tandem off Everest (although a Dutch husband and wife team had done in 2001). The laws of the land also did not allow such a flight. After a short hike beyond Jorsale, they identified themselves to the in-charge at Sagarmatha National.

Park Office in Monjo, asking why the army was pursuing them. The park manager trumped up a violation: ‘disturbing wildlife in a national park’.

Babu had to think quickly. He asked if paragliding disturbed wildlife any more than tourist helicopters in Sagarmatha National Park, or jeeps on jungle safaris in Chitwan National Park. The park officer let Babu and Lhakpa go, but the army maintained their arrest warrant. (Later, when National Geographic fêted the duo as Adventurers of the Year, Babu contacted Nepal Army headquarters in Kathmandu, “Arrest me now or tear up the warrant.” The army promptly dismissed the warrant.)

Babu and Lhakpa trekked on to Sun Koshi, paddling its waters to Jharkhand in India and eventually drifted through the Gangetic plains to the Bay of Bengal. The duo faced both the highest peaks and oppressive sea level climates with ease; people proved most treacherous. Besides oxygen cylinders on Everest, they were also robbed at a riverside camp of their cash and gear.

There was no money to burn, though Lhakpa may have tried. I first met Lhakpa in Pokhara over dal bhat and locally-brewed firewater. He was still chasing his dream of learning to fly down lofty peaks. Babu, also with us, said, “Kilimanjaro was more difficult than Everest!”

In February 2013, Babu flew tandem off the highest peak in Africa. Nearly hundred ace pilots had set out to raise money for charity, all of them except for Babu turned back due to extreme winds and food shortages.

This article was part of the Feature section in Issue 6 of our print magazine.