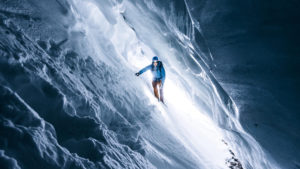 Bridging the gap between alpinist and photographer, Stevin Tuchiwsky leads us through the hidden ice caves of Calgary's Icefield Parkway in the premiere episode of "Getting the Shot."

What better way to begin our adventure than in our own backyard, Calgary, Alberta? Who better to show us around than Stevin Tuchiwsky from Calgary?

When I think of outdoor photography, I think of Stevin. Stevin bridges the gap between alpinist and photographer. Early morning starts to catch the sunrise, massive approaches to remote destinations, climbing high into the mountains in search of new angles, Stevin is the real deal. 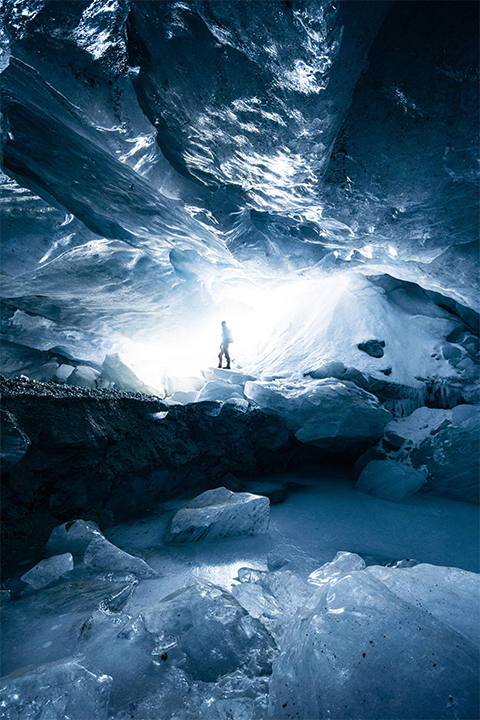 Calgary is nestled right on the edge of the prairies where the flat plains gracefully meet the dramatic peaks of the Rocky Mountains. The unassuming city of Calgary acts as a basecamp for those who wish to venture into the high mountains.

After driving west into the mountains, we head north along the 93A, otherwise known as the Icefields Parkway. National Geographic once called it the most stunning drive in the world. The Icefield Parkway earned its namesake by the gigantic ice fields that surround the highway between Lake Louise and Jasper.

Stevin had explored some hidden ice caves in previous years and captured some absolutely jaw-dropping images. We had hoped he might show us some of his hidden locations, and show us how he managed to capture such incredible images.

Because of the remoteness of some of these caves, Stevin had not had the chance to scope out any of the locations yet this season. Glaciers are constantly changing and a lot can change in a single season. We were hoping for the best as we hiked towards the glacier. 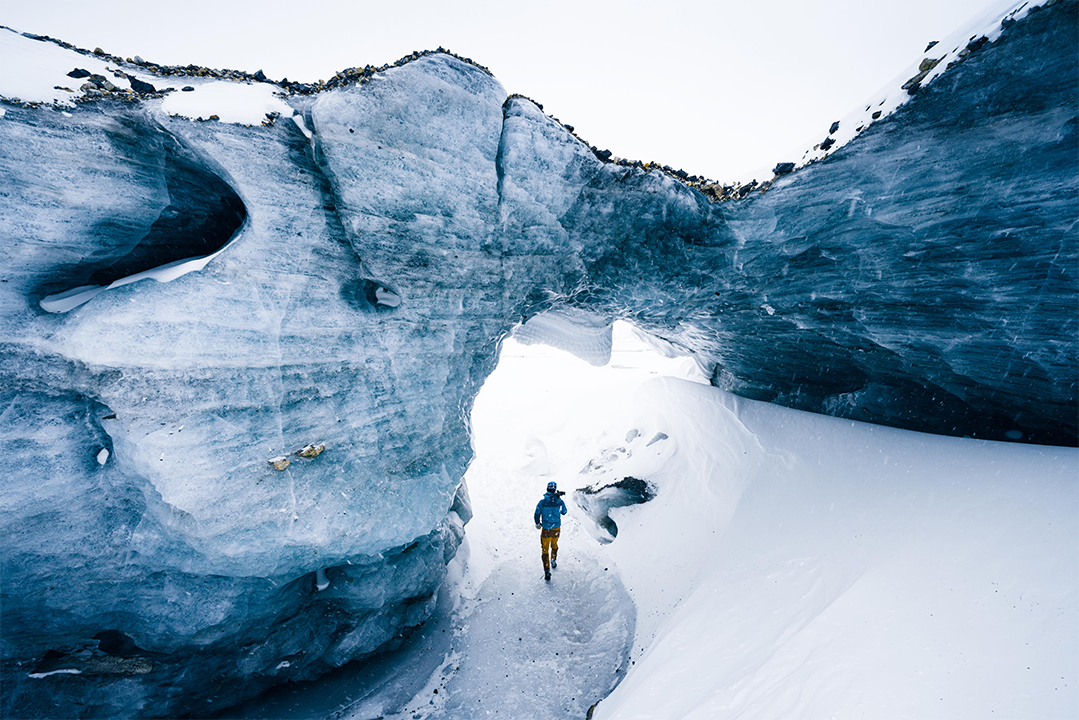 As we neared the toe of the glacier in Jasper National Park, Stevin pointed out an amazing ice bridge that had formed as the glacier receded in the summer. Stevin pulled out his Sony A7R III and asked me to approach the ice bridge to provide some sense of scale. 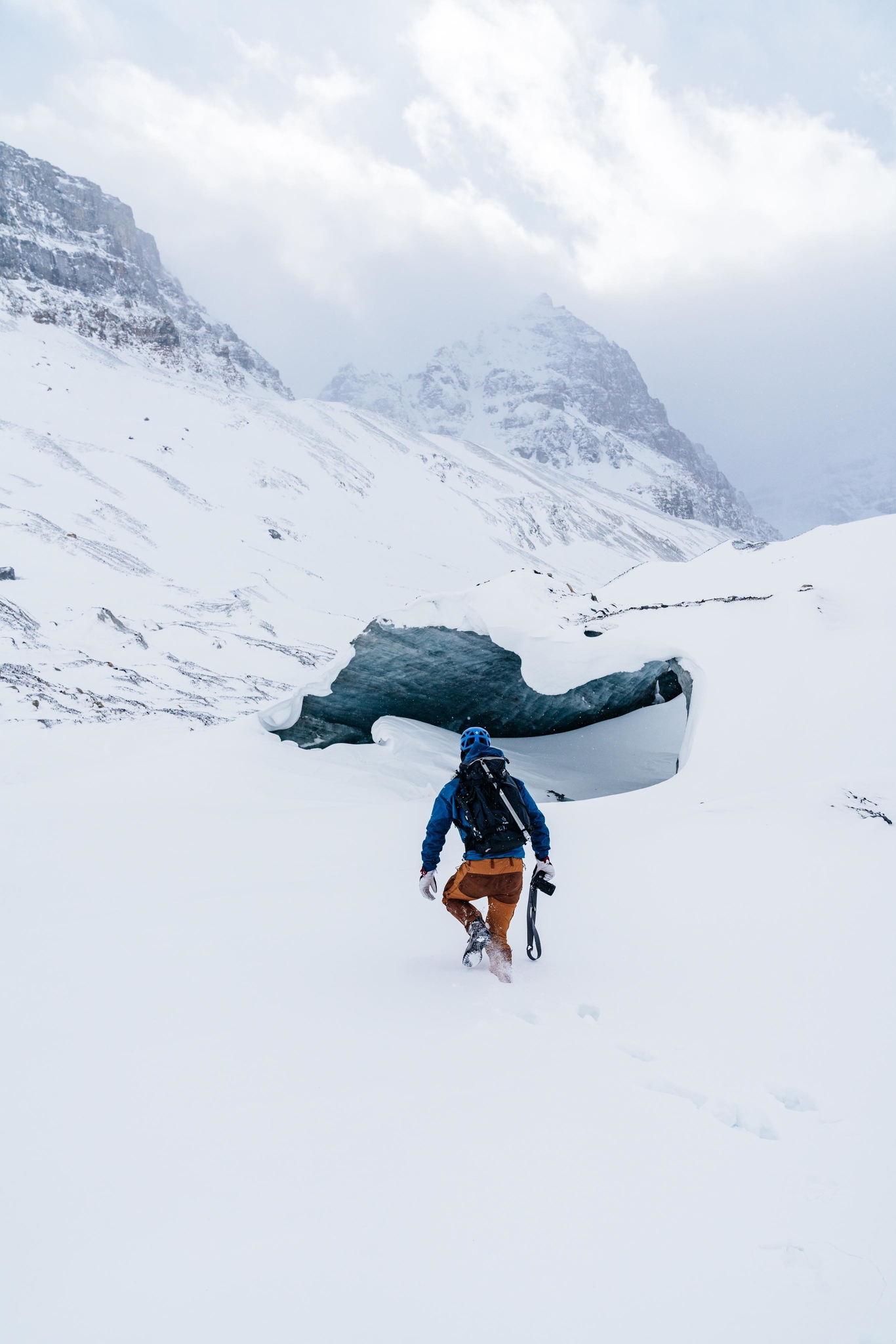 We headed deeper into the glacier in search of caves that might make for some dramatic images. Our Stevin spotted a small crack in the glacier where we crawled inside to expose a small ice cave. After capturing a few more frames of me navigating the glacial terrain, we ventured to our next cave.

it was as if an entire underground ice castle had existed just for us to shoot.

The second cave was a little harder to find, the entrance was less obvious and the approach to the inside was a little bit more difficult to negotiate. Once we were inside the cave though, it was as if an entire underground ice castle had existed just for us to shoot.

I could see Stevin’s creative eye begin to hop all over the place. Stevin quickly down-climbed further into the glacier to position himself for the perfect frame. He then directed me to climb onto an ice block where I would hold a pose for about 25 seconds while he shot a long exposure image. 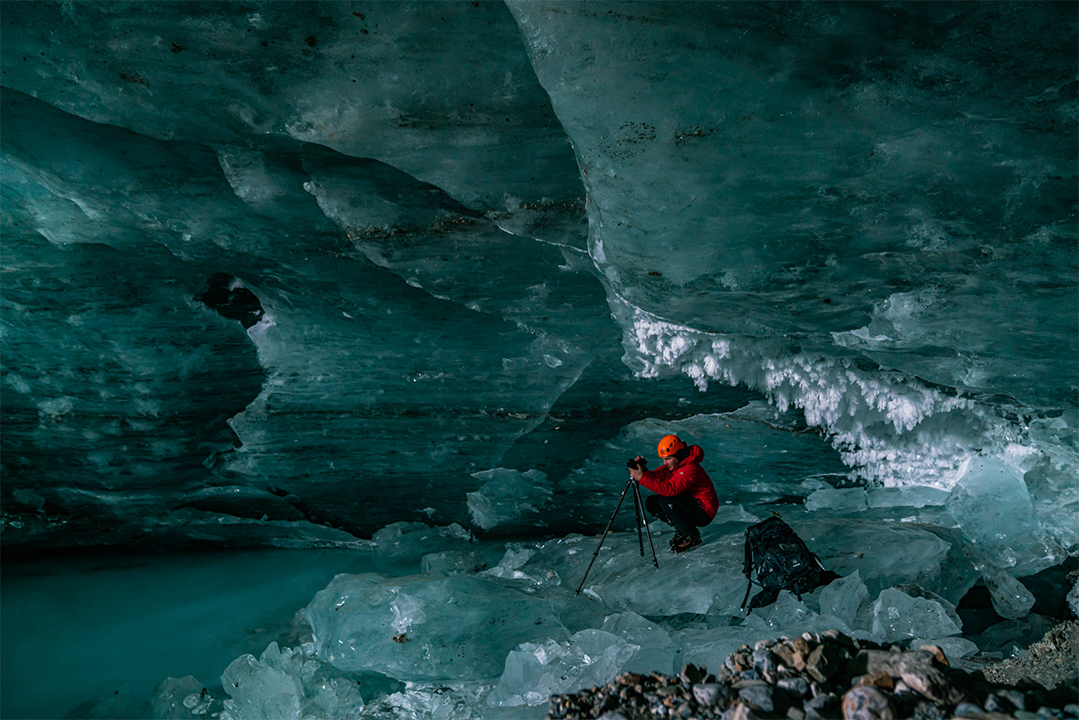 With such limited light only emitting from the small crack we climbed through, Stevin opted to shoot longer exposures between 5 and 25 seconds to capture as much light as possible. The long exposure shots meant I had to hold my pose as still as possible to ensure I was tack sharp in his final image.

The first location was a massive success. We hiked out of the glacier and back to the Icefields Parkway to drive back towards Banff National Park where we would shoot our next location, a massive frozen waterfall.

It was well into the night by the time we arrived at the frozen waterfall. Stevin had shot the location many times before but never in the dark. He had a few ideas for some images he hoped to create using the same long exposure technique he had used in the glaciers.

I was wearing yellow pants and a bright blue jacket, so naturally, Stevin was drawn to the contrasting colours and asked if I would be his subject once more for his shots behind the frozen waterfall. I wore a headlamp that created just enough ambient light for Stevin’s shots. Stevin asked me to make micro-adjustments with my stance, head position, and direction of light. After about 20 minutes of shooting, Stevin was happy with what he had captured. 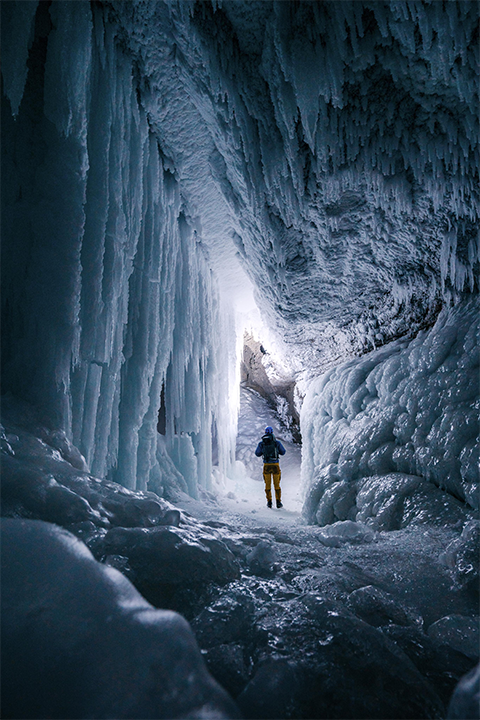 We explored the frozen waterfall a little longer before our sleep deprivation got the best of us. We headed back to the highway for our 2-hour drive to Nordegg, Alberta near Abraham Lake where we would catch a few hours of sleep before sunrise.

The sun rises quite a bit later here this time of year, being so far north. We took full advantage of this and slept in as late as we could before we headed back out into the freezing cold to photograph sunrise on the famous, yet remote lake. We set our alarms for 5:30 am.

Once we arrived at the lake, we scoped out our best possible locations for sunrise well before the light began filling the sky. Our headlamps lit the way as we wandered around the frozen lake in search of methane bubbles that freeze in the ice forming incredible shapes.

After some time, Stevin began to notice the lake had thawed and frozen again quickly, which had created these very unique and interesting shapes in the ice. The shapes were extremely defined and created a really unique foreground for his images. 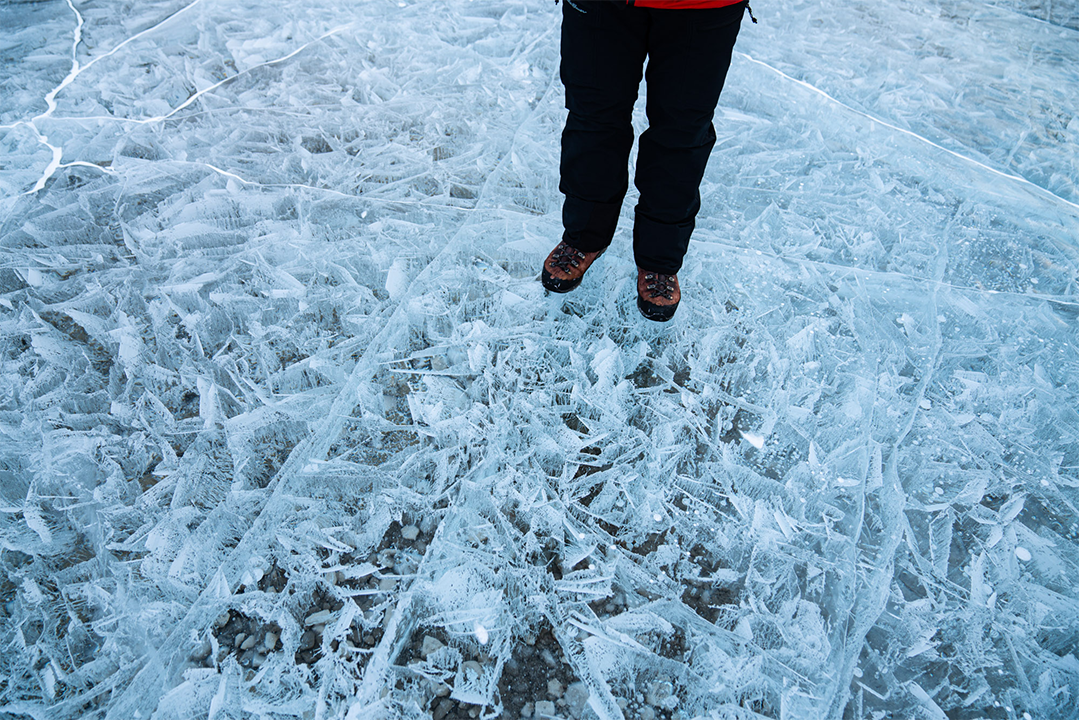 “Instead of the methane bubbles, Stevin instead decided he would shoot these rare shapes in the ice. Sometimes you come out to these places expecting to capture something but instead, you adjust with the situation and capture something entirely new and unique.” – Stevin Tuchiwsky 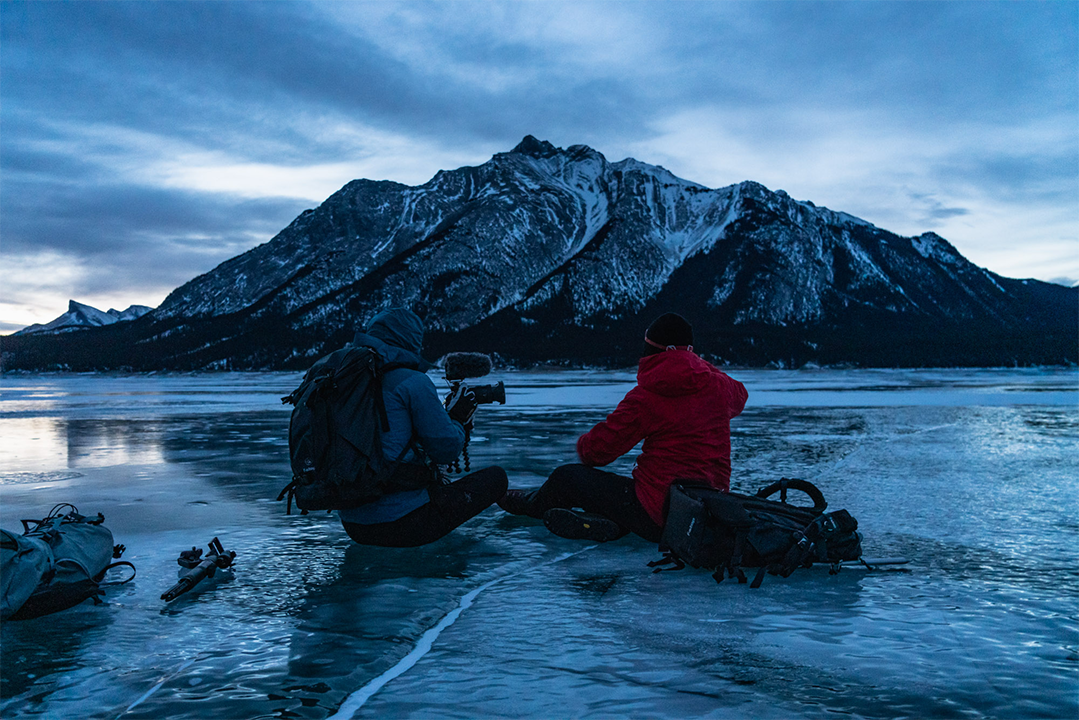 We were hoping the sunrise would give way to beautiful colours and something interesting to look at in the sky, however, the sunrise turned out to be a bit of a bust.

That’s the thing about outdoor photography though, if it was always a sure thing, the reward wouldn’t be as great.