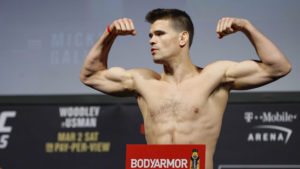 MMA Fighter Lays Out the Secret to Longevity in Any Sport

UFC Fighter Mickey Gall details his intense fitness regimen and the CBD-infused recovery routine that allows him to endure grueling cross-training workouts to compete at the highest level.

Whether your passion is running ultras, climbing mountains or trekking glaciers, a peek into the training methods of an elite MMA fighter, to see how he achieves both optimal performance and recovery, could get you to your summit faster and stronger. Doctors, performance athletes, and weekend warriors experiment with CBD for enhanced yet natural recovery.

Listen to our latest podcast episode with UFC fighter Mickey Gall about what it takes to cross-train and recover on the way to the top.

If you’re a rabid fan of mixed martial arts, an occasional viewer, or even if you are philosophically against the idea of two humans fighting inside a cage, athletes in all sports have much to learn from the bleeding edge training and recovery practices of today’s elite professional fighters. Their lean yet muscular physiques allow them to kick, punch and grapple with other experts who have dedicated decades to learning a deadly skillset. From a cardiovascular perspective alone, what challenge could be greater than to combat another trained fighter for 15 minutes or even 25 minutes at a time? Fighters need a seemingly unattainable combination of explosiveness and endurance along with the ability to stay calm under pressure and overcome the fear of getting beat up in front of everyone they know and love.

The Ultimate Fighting Championship (“UFC”) is extreme in many ways, including the all-access way that it’s documented. Compared to mainstream sports like the NBA and NFL, UFC athletes share the greatest access to their training. Cameras capture them testing their metal in Thailand, sprinting up mountains in Big Bear, pushing sleds in the gym, wrapping their hands before a fight, celebrating in the ecstasy of a win and suffering through the agony of a loss.

Mickey Gall quickly became a star in the sport by beating big names on big stages. Gall demanded the spotlight by first calling out and then dominating professional wrestling superstar CM Punk before derailing the hype-train of the company darling – spikey-haired, athletic phenom Sage Northcutt. “This is a dog eat dog sport and you eat what you kill, so if you can kill someone who’s got some hype, you get some hype around you.”

The 28-year-old from Green Brook, New Jersey is proud of his “Jersey toughness,” but that’s not enough to win in the UFC. Gall began training in the various disciplines comprising mixed martial arts – including foundations in kickboxing and wrestling – at the age of 19, with a focus on Brazilian Jiu-Jitsu, a specialty designed to isolate the opponent’s limbs and neck to force them into submission. It’s an art with unlimited nuances and it took Mickey 11 years to earn his black belt from the renowned Gracie Jiu-Jitsu disciple David Adiv.

“I got into this sport to be a champion… I’m a competitive dude. I want to be the best at everything I do.”

After having a tough time matching up in the amateur ranks, Gall decided to turn pro at 23. As fate would have it, Dana White, the President of the UFC, was in attendance. Two months later, Mickey had his first fight in the UFC, the premier promotion for mixed martial arts. By calling out marquee fighters in Punk and Northcutt, to whom the organization had already devoted substantial marketing efforts, Gall has been in the spotlight since day one, so any and all hiccups along the way would be highly publicized and open for scrutiny.

His Jersey toughness overtook his better judgment when he took on Diego “Nightmare” Sanchez, a true legend in the sport, while suffering rhabdomyolysis, a condition whereby muscle cells burst and leak their contents into the bloodstream. According to Harvard Medical School, the most common reason one would acquire this disease is due to overtraining and quickly increasing overall intensity while working out. (Ultra-runners like Scott and Rhys Jenkins have encountered rhabdo mid-race). Afterward, Gall spent eight days in the hospital with kidney failure. Since then, Gall has doubled-down his focus on recovery. “The times when I’ve lost fights, especially when you get separation from them, they’re the best thing for you, because that’s when you grow the most.”

“How are you going to be a legend if you don’t train with legends?”

Training MMA is a humbling experience. It’s a continuous cycle of entering gyms where more experienced and more specialized experts can and do beat you up with a smile on their face. In what may sound like a week’s worth of training, Gall often crams training sessions in wrestling, jiu-jitsu, and Muay Thai kickboxing all in one day, and that’s not even counting the obligatory bag work and conditioning. “You have to be one of the best in one martial art and world-class in a few other ones.” Mickey often starts his morning going full-boar with an Albanian wrestling superstar for a handful of five-minute rounds. (Just imagine how your day at the office would go if that was your morning routine!)

With his eye on the welterweight belt, Mickey routinely travels as far as Montreal and Los Angeles from his home in New Jersey to train with well-established fight camps and some of the greatest minds in the sport. “How are you going to be a legend if you don’t train with legends? “I’ve traveled all over the world trying to train with the best.”

As a student of body mechanics, Gall searches for ways to build his body and break his opponent. But any pro athlete will tell you that with intense training comes the inevitable soreness and injury. When searching for a solution, it was very important for Gall to start an effective, non-habit-forming regimen that relieved his pain and helped him relax. He found his answer with CBD – tinctures, cooling cream, sleep aids – and never looked back. “I’ve been taking CBD for years, not only for my joints but for my brain.” Gall started experimenting with CBD years ago to proactively combat CTE, which is associated with brain trauma, an unavoidable part of the sport. [Read more from concussion expert Dr. Maroon about CBD’s benefits to the brain].

Not all sports involve getting hit in the head, but CBD can ameliorate joint pain caused by repetitive stress in any endeavor – from running to cycling to rowing. “I cover myself at night with CBD cream, literally head to toe – my ankles, feet, calves…” [Read about how freestyle mountain biker Cam McCaul credits the acute ability to maintain concentration both on and off the bike, on CBD’s natural healing properties.]

Although it’s proven that CBD lacks the psychoactive effects of THC (those associated with the marijuana “high”), it does have mood-altering benefits. “With VENA CBD, I can feel it.” Take it from a guy who likes to do nothing but eat, sleep and train, “I try to work the hardest, and I think if you work the hardest, then you need to recover the hardest.”

It’s hard to argue against the fact that UFC fighters are the best athletes in the world at maximizing their physical output when it’s time to perform. To offset the trauma he does to his body, Gall sticks to a triple approach to recovery by dosing up on capsules, drops, and topical cream.

In what must have been a tantalizing year, Gall has had his past three fights scrapped, including a matchup against future Hall of Famer Carlos Condit. But his upcoming bout on June 27 against Mike Perry, a savage bar-fight style fighter, is sure to be fireworks. A win will surely launch Gall into the stratosphere of the top 15 in the world.

In this episode of The Outdoor Journal Podcast, Gall details his weekly cross-training regimen to become a better athlete and a more complete fighter, his ultimate goals in the sport, and his triple approach to recovering with CBD.

Listen to our latest podcast episode about training and recovery at the highest level with UFC fighter Mickey Gall.

When he’s not training, you’ll find Gall helping out at St. Ann’s Soup Kitchen in New Jersey with the rest of his family, just like he’s done since age 13. “It makes me feel good. It makes me feel like I’m doing something that matters.” Donate today.