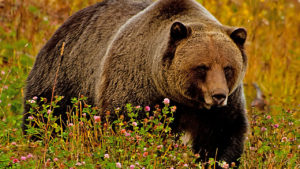 Views of this embattled species range from “all bears are violent and unpredictable” to “OMG, I just want to hug a bear". But is it ethically right to kill a bear, if not for food?

Nicole Gangnon has worked with animals her entire life. With this passion, Nicole began volunteering at a young age before pursuing her veterinary assistance degree. During a trip Rockies, she fell in love with the mountains & decided to return to school to obtain a diploma in Fish & Wildlife. Upon graduation, Nicole was hired to the Grizzly refuge at Kicking Horse Resort & has now been a part of the refuge & Boo, the resident Grizzly, for 7 years. Continually moved by a love for animals, Nicole is currently developing a wildlife rehabilitation centre in Golden, BC. A licensed & government permitted facility that can accommodate a variety of species from birds and Elk. As Nicole puts it, she “may not save the world by saving animals, but saving that animal changes its world”.

Grizzly bears are often a hot topic in and around Golden, British Columbia. Despite the broad range of views and opinions, millions of tourists flock to Alberta & BC Canada for the opportunity to see a bear, more specifically the noble Grizzly.

Until November of 2017, grizzly bears have been trophy hunted in British Columbia, but is it ethically right to kill a bear, if not for food? This question has been presented to the public and debate circles across BC. Should we finally end the decades’ long trophy hunt?

The Grizzly Bear Foundation, established in 2016, considered the question and sought the opinions within the bear industry, from those who work with captive bears to individuals who work within the bear tourism industry and guide outfitters. The Grizzly Bear Foundation wanted to consider the topic with attention to research, public education and conservation. This organization is the only not for profit in Canada that is dedicated to the welfare of grizzlies, with a focus on their status and long-term future.

From an ecological view, grizzlies are considered to be an ‘Umbrella’ Species, defined by Boston University as a species that “provides protection for other species using the same habitat as the umbrella species. As the term implies, a species casts an “umbrella” over the other species by being more or equally sensitive to habitat changes. Habitats supporting grizzly populations are often lush, boasting a variety of flora and fauna. Having evolved to dig, grizzlies commonly search for roots, tubers, bulbs, small rodents, and insects. Their impressive front claws are powered by the formidable muscle mass located between their shoulder blades, so naturally, they are uncovering large areas of nutrients under the soil – nutrients that are therefore exposed to other animals, while the seeds of the plants they consume are allowed to pass through their digestive tract without being broken down. This means when bears defecate, they are replanting their food sources. Experts often refer to Grizzlies as nature’s gardener.

Working for Kicking Horse Mountain Resort’s Grizzly Bear Refuge, I have personally seen growth within the bear-viewing industry. I have been employed by the resort for seven years and when I first started, we would see an average of 8,000 visitors to the refuge each summer. This summer, 18,000 visitors have walked through our door, and all our guests respond in the same way when asked, “Why visit BC?”. “To see bears”. Our resident grizzly bear Boo is a big reason why tourists flock to Kicking Horse. How many opportunities are there to safely observe a Grizzly whilst learning relevant information about their ecology, biology, mating and history?

“Our ambassador for his wild kin”

Boo is our ambassador for his wild kin. He helps us drive home the message of the importance of grizzlies to our ecosystems. Boo has a sad story but one of significance that must be told. At five months of age, Boo and his brother Cari were foraging alongside their mother near highway 26 in BC. A poacher with no regard for life pulled up beside her in his vehicle, raised his high-powered rifle and took his shot, killing her and orphaning the sibling brothers. A common practice by the BC government was to euthanize orphaned grizzly cubs. There wasn’t an option for rehabilitation in 2002 and had it not been for Grouse Mountain initially, the brothers would have been destroyed. Grouse Mountain proposed to Kicking Horse the idea of building a refuge for the brothers and KHMR agreed. Thus began the Grizzly Bear Refuge program which focused on research in its first four years of development. What was the research focused on? The inherent skills of a grizzly cub. What skills, if any, could they develop in a safe area that offered similar opportunities to those in the wild. “Why” was this important question. To push the province to implement a rehabilitation centre for orphaned grizzly cubs.

Cari and Boo together made the long arduous journey from North Vancouver to Golden, BC in 2003, commencing the beginning of KHMR’s bear program. Boo’s home is in sub-alpine terrain and encompasses four mini-ecosystems within his enclosure. Much of what was learned by observing Boo and his brother Cari was compiled to complete a master thesis and this information helped to support seeing the implementation of a rehabilitation centre in the province. In 2007, the government gave the green light to the Northern Lights Wildlife Society in Smithers, BC. To date, they have successfully raised and reintroduced 20 orphaned Grizzlies back into the wild of BC, but they are currently the only facility in all of North America to have the approval to do this. They receive no funding via the government and heavily rely on the generosity of donors, but their work is incredibly important.

The Grizzly Bear Refuge now focuses on education. We speak out loudly against the trophy hunt, implementing and submitting petitions to see trophy hunting abolished. Meanwhile, we inform our guests about the heinous hunt for bragging purposes and ask them to speak out on behalf of BC’s grizzlies and Boo. When our guests meet Boo, many are moved to tears over his beauty and brilliance. Their fears melt away and a newfound respect develops while they listen intently to Boo’s story. He has changed the mind of so many individuals and created new bear advocates while strengthening the fight against the hunt. I’m proud of him and my team. We were part of a huge movement where the people, for once, were finally heard and our grizzlies, most importantly, are now protected. I’m an advocate for those without a voice and I will continue to promote coexistence because I truly believe humans and bears can share the landscape without fear of each other.

You can find out more information about The Grizzly Bear Refuge in Kicking Horse Mountain Resort by clicking here.