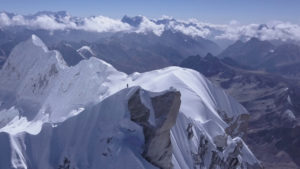 Healing after Howse: How does the climbing world cope with the triple tragedy?

In April, three prominent young alpinists perished in an avalanche on Canada’s Howse Peak. Their deaths prompt another reckoning with mountaineering’s timeless question: is it worth it?

The physical aftermath of tragedy is procedural. On April 21st, a Parks Canada rescue team located and recovered the bodies of climbers Jess Roskelley, Hansjörg Auer, and David Lama four days after they were reported overdue from an attempt at Banff’s Howse Peak via the technical M16 route. According to the official avalanche report, none of the men were wearing transceivers; use of these devices can greatly expedite recovery operations. In the absence of transceivers, a trained avalanche dog scoured the frozen debris. Roskelley’s phone was salvaged and in the camera roll, a selfie of the climbers, wide grins frozen on fatigued faces, suggests that the trio reached Howse’s summit. Social media the world over shook with an outpouring of sympathy and support.

Read next: Jess Roskelley, David Lama and Hansjörg Auer: How the World Reacted.

The emotional aftermath of tragedy is less straightforward. Inevitably, many critiqued the sport of mountaineering and its legacy of tragic accidents. Is it ethical to risk death in pursuit of a snow-capped summit? Why do climbers seek out high-consequence routes? Are elite mountaineers doing wrong by the spouses, children, parents, and friends who await their safe return?

Is it ethical to risk death in pursuit of a snow-capped summit?

Last year, the hit documentary Free Solo thrust these questions, normally the domain of the climbing subculture, into the mainstream as Alex Honnold’s unroped climbs astonished millions of viewers. In the wake of the deaths of Roskelley, Lama, and Auer (aged 36, 28, and 35 respectively), the climbing community once again confronts the unforgiving nature and fatal consequences of their craft.

As generations of mountaineers will attest, the riskiness of a route is part of its allure. Climber Steve House, part of a trio who notched the first ascent of Howse’s M16 route in 1999, wrote the below on Instagram;

This mountain, Howse Peak is among the most powerful mountains I’ve ever known. She changed many lives this week; in tragic ways. I lost three friends, three brothers. That is the least of it, I’m sure. I knew all three, but I knew @hansjoergauer best of all. He was a both a friend and a God to me. The greatest confusion for me personally in this moment is the role of the route M16. A route I climbed over five days, now so vividly remembered, over 20 years ago. That climb took myself and Scott Backes and Barry Blanchard to the limits of skill, power, judgement, and yes—luck. It challenged our very life-force and we nearly lost. I climbed one of the most difficult and dangerous pitches of my life. Barry was very nearly killed by collapsing snow. Scott held us together as a team far more powerful than it’s parts, then, and forever after. And now that power we knew, has killed. I wish I had words to help the mournful understand who this mountain is. What climbing Howse Peak’s precipitous East Face means. It is simply this: The truest testing place of the most powerful men on their very best days. An arena for those rare and mighty, honed, long-practiced men that are challenged by nothing less than to be locked in struggle to the death with one of the mightiest powers on earth. These men were warriors, Knights, dragon killers seeking fleeting, hot-forged perfection through the dangerous path of alpinism, the creative physical expression of power over the most high, inhospitable, inhuman terrain on earth. To be honest I’m a little afraid to put this out there like that now, in 2019. Seems somewhat out of step with where we are as a society. But damn it, it’s the truth. These were great men. The true 01%. This is something each of them proved with actions over and over again. These men were immeasurable. They were not men, but Gods living among us. And now they’re back with their God. And we are less. Our loss immeasurable. It is with the deepest respect and the biggest ❤️ and wet streams of tears that I, that we, begin to adjust to life among mere mortals, a poorer life, and we begin to say goodbye.

House cites a feeling afforded by high-consequence climbing that supersedes normal parameters of reality. It transports the climber to the extremities of human experience.

In an article published in The New York Times following the tragedy, Rock and Ice Magazine editor Francis Sanzaro offered a different perspective:

“I can tell you that standing on a dime-size foothold with no rope, with your fingertips on a sloping edge, in a remote part of the mountains where one mistake means instant death, in no way translates to a heightened experience…If you need to go to the ends of the earth and the edge of your mortality to find some mystical je ne sais quoi, then you need to rethink your strategy. I climb because I love it. So did David, Jess and Hansjörg.”

Sanzaro rebukes the “mystical je ne sais quoi” House describes. The rhetoric of the two seasoned mountaineers is at odds; House glorifies the dance with danger, while Sanzaro suggests that risk is overrated.

Banff-based author Bernadette McDonald is an expert on the psyche of cutting-edge climbers, and she notes the role of luck in even the most seasoned alpinist’s climbs. “If you talk to an alpine climber with a long history in the mountains, it’s extremely rare to find someone who hasn’t had close calls,” she says. “Almost all alpine climbers, if they’re honest, have to give credit to luck at some point.” McDonald believes the climbing community is aware of the risks but was unprepared to lose three luminaries on a peak in the Canadian Rockies. “I think that many people assumed that climbers this skilled and talented could climb their way out of any situation—they climb so quickly, make such informed decisions, etc.—but the objective hazard is simply that. And the East Face of Howse Peak has a reputation that has to be respected,” she says.

Lama, Hansjörg, and Roskelley presumably understood the risks. Perhaps they welcomed them with fervour, as House describes, or with acceptance, as Sanzaro contends. Does that make them selfish? According to McDonald, it does. “Of course climbers are selfish,” she opines. “The most honest among them freely admit it. Top-level climbing performances can inspire us, motivate us and capture our imaginations, but fundamentally, they are not done for the benefit of others.”

“Of course climbers are selfish. The most honest among them freely admit it.”

It’s difficult to measure the overall riskiness of mountaineering, but researchers at the University of Washington studied the fatality rate of climbers on Mt. Everest, a classic mountaineering objective. Based on data from 2,211 Everest climbers from 1990 through 2005, they found that climbers have a 1.5% probability of dying on the mountain. While this figure does not differentiate by ability or experience (i.e. elite vs. amateur) or route difficulty, it offers a crude baseline of the peril of mountaineering. By comparison, in 2017 Americans had a .97% chance of dying from an automobile accident and 0.88% chance of dying from an accidental fall. It would not be far-fetched to claim that professional mountaineers have a similar chance of perishing in a car crash en route to a trailhead as climbing a difficult objective. And it would be ludicrous to denounce every commuter for having the nerve to set foot in an automobile.

Part of our collective anguish over the triple tragedy has to do with our perceptions of risk. Harvard psychologist Daniel Gilbert is an expert in risk bias and he contends that we overreact to immediate threats and downplay perils that are perceived as “routine”, like car crashes. Additionally, we overreact to dangers that implicate our morals. These factors may account for our perception of mountaineering as an extremely dangerous and potentially foolhardy enterprise. News of three competent athletes brought down by an uncontrollable avalanche is unnerving in a way that car crash statistics will never be. The charismatic nature of a summit push is spectacular, and by extension, the effort gone awry is spectacularly tragic. In mountaineering, we see an expression of a popular moral archetype—the human protagonist doing battle with fierce nature—and thus we may accuse the sport and its participants of ethical impoverishment when those human protagonists perish. But in the end, we cannot fully comprehend, must less control, the decisions made by individuals. As McDonald suggests, “Some [climbers] have a higher risk tolerance than others, but all climbers need to take those risks—manage them, live with them.” Tragedies will always accompany mountaineering, and we must manage and live with them.