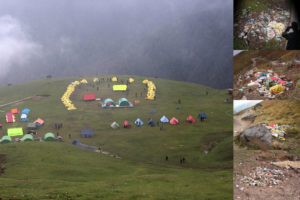 Mass Trekking in India: A Disease For Which We’ll All Suffer

From unreported deaths, to unsustainable human activity and environmental degradation. India's national heritage is at stake.

Statistics say that the outdoors is now nearly 70% of all leisure, vacation based travel, globally. This has massive ramifications in a country like India – where guidelines are available, but actual regulation, monitoring and implementation are abysmal.

Cause and effect: a hugely improved economy, increased and better road networks, the aviation revolution, internet and accessibility and a heightened sense of individual self-expression and need for fulfillment, aided by increased economic ability, have helped catapult adventure holidays to the fore. This is especially true for commercial trekking in the high Himalaya, an activity that has grown to four or five times its industry size over the last decade.

India’s adventure travel industry began in the 1980s with a handful of outdoorsmen and women, who launched businesses with minimal resources, in an era when international borders were shut off in terms of importing equipment, and a consumer market that was non-existent. It was an era of telex machines, 286 computers, and faxes were the next big thing (if you had the joy of having international dialing on your landline!).

Then, in the late 1990s, everything changed. India’s economy liberalized, and travel magazines and the internet brought in images of meadows, high passes and camping outdoors. The romance of adventure travel in the Himalaya began to stream into ordinary homes across India via slow-loading HTML pages. With the opening of the Indian economy, this adventure industry began to canter, as our large population of motivated young people began to receive salaries that allowed for a reasonable, if not substantial, disposable income.

Then came the big revolution. Multinationals, software companies, startups, IPOs, online shopping and e-commerce… and the true gallop! A new breed of outdoor companies began to be created, and to flourish. With no regulatory barriers to entry, no checks and balances, individuals with no background in the adventure space began launching adventure travel companies. All one needed, all one needs even today from the Government of India to run an adventure outfit in the country, is a certificate of incorporation from the Registrar of Companies, Ministry of Corporate Affairs. That’s it. By law, there is no requirement for permits, no experience, no certifications, no insurance.

So, a couple tents and a website, and anyone or everyone who wants to join the galloping adventure tourism bandwagon, may do so. These new companies, more software savvy and outdoors unaware, began to change the game. Throw in a few exhausted ex-corporate executives, and you had a few more people of means who joined the industry. A real churn began from 2008-10 onwards.

With no ethical understanding of ‘Leave No Trace’ principles, and scant overall outdoor experience, first-time trekkers began to tramp trails high and low.

All of a sudden, internet videos and WordPress blogs posts began to surface spouting tall online claims of “pioneering” and “reinventing trekking in India”. As the large Indian market began to move towards the mountains, these new, online-savvy companies hurtled first-time customers into fragile environments which were completely unprepared for the numbers. The lack of experience and expertise of the organisers also showed. Back to back trekking groups marching into high Himalayan valleys and passes that had perhaps seen only a few dozens human beings a year in throughout history, arrived in conveyor-belt operations. With no ethical understanding of ‘Leave No Trace’ principles, and scant overall outdoor experience, first-time trekkers began to tramp trails high and low. Pushed forward by companies that touted a series of FULL departures – but wait – there’s always room for more! In an unregulated legal environment, more and more mass players started a price war, mixed into this deadly cocktail, the unaware customer. The Indian adventure travel industry is speeding towards an ecosystem of operators and clients least invested in keeping the unique value of the Indian outdoors alive. Value-based pricing has been cast aside. Deceptive, discounted pricing models settle in. All that matters is getting a piece of this giant pie –  a business lesson from the great corporate e-commerce game!

The result? Mass human movement into once-pristine ecological zones. More bums on non-existent toilet seats, more human waste in Himalayan meadows, and more feet repeatedly churning up fragile trails. Illegal fixed camps in Reserved Forests zones and even National Parks (so that these companies could save repeated ferries of supplies and equipment, and thus additional porterage forest fee/charges). Poor guest to guide ratios. A 20-something ‘English-speaking’ guide with little outdoor experience herding groups of 25-30 trekkers (sometimes more) up trails from camp to camp. Campsites getting degraded with these massive numbers, and an unacceptably low ratio of toilet tents to human beings, disincentivizing their clients to use them, and then the outdoors is littered with toilet paper and human feces. (Some campsites like the Stok Kangri base camp and high altitude Roopkund lake) are still bear witness to this ignominy.

The overall economic benefit of this activity is minuscule compared to the damage caused. But what’s worse, fatal accidents began to happen. Inexperienced guides who did not recognize dehydration, exhaustion or onset of Acute Mountain Sickness. Besides a lack of experience, there simply weren’t even enough to monitor the crowds they were expected to handle in the high mountains! And to no surprise, with this came deaths. Due to a simple lack of knowledge, basic leadership and mountain experience, and guide-client monitoring. So many unreported deaths have occurred in the last four years, that it is unbelievable that no steps had been taken to mitigate the risk – and only spoken of now, after trekking has been banned in Uttarakhand.

What will come of it? With this ban, these companies may spread this model to different parts of the Himalaya, or elsewhere in India. Whatever actions are taken, whatever regulations enacted and hopefully enforced, have to be national. This is our national heritage, and its preservation and access must be the responsibility of all users. Every week that passes is another week lost.

So what can we do? Access control is the need of the hour. Registered companies and guides are a must. No operation = No access must be implemented. The privilege of being in the outdoors must come with a price to pay for its upkeep. The sheer number of trekkers and overall human activity must be limited, to avoid an utter destruction of our natural resources.

It really is quite simple. Creating an adventure travel company and a business that takes people outdoors, is not the same as starting a multi-national corporation. It is more about getting back to the basics, about living well, living in tune with nature, and preserving our natural environment and national heritage. That is how it was always supposed to be done. Keep it safe, keep it small, keep it sustainable!

The Adventure Tour Operators Association of India (ATOAI) Risk Mitigation Committee is leading a charge in September to recommend changes at a national level, to better preserve India’s outdoor heritage. We spoke to the Committee Chairman, Vaibhav Kala, whose views are printed above. The author’s opinions are his or her own, and do not necessarily reflect The Outdoor Journal’s views or reporting. The Outdoor Journal supports better practices in wilderness conservation through outdoor recreation.

As this article is listed under our Op-Ed category, this piece is an *opinion*. As is usual across media, the author’s opinions are his or her own, and do not necessarily reflect  The Outdoor Journal’s views or reporting.