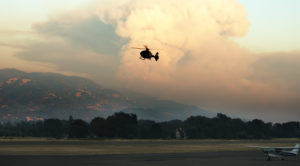 The California wildfires of 2018 have seared themselves into the public conscience due to their alarming scale and destructivity. If you are one of the 50,000 ordered to evacuate your home, you know the severity of the infernos. If you are one of the millions of Mountain West residents concerned by the smoky atmospheric haze in your skies for the past month, you can appreciate the fires’ far-reaching impact. If you have followed the flurry of statements from the front lines and finger-pointing officials, you have seen a prominent fact emerge from the smoke: these fires and their effects were made worse by our warming climate.

One misconception about climate change is that it solely causes warmer temperatures. This oversimplifies the situation; global warming due to human activity results in a thinning protective atmosphere and increased solar radiation. The consequences of this heightened solar radiation manifest in myriad extremes such as floodings, drought, heat waves, and more frequent catastrophic weather anomalies. Research published by the National Academy of Sciences suggests that climate change may also increase lightning strike frequency and generate high winds.

According to the 2016 research report, these factors, driven by our carbon-burning habit, are ideal for perpetuating and sustaining large fires.

California’s 2018 wildfire season was the volatile climax of an intensifying narrative of climate change factors. These factors form the backbone of this story. Abnormally heavy winter rains in 2016 and 2017 led to an explosion of plant growth, increasing the fuel load for a sustained flame. In the spring and summer of 2017, earlier springtime melt-off and intense heat dried out the surplus plant material. Come July of 2018, conditions were ripe for the monster Mendocino Complex Fire and several others to torch 600,000 acres, destroy over a thousand homes, and claim at least eight lives. Of the protracted fight to contain and extinguish these flames, president of firefighter union Cal Fire Local 2881 Cliff Allen remarked that “The new normal is we are busier than we’ve ever been”. And further destabilization is likely. According to director of CU Boulder’s Earth Lab Jennifer Balch, computer models forecasting future climate patterns reveal an increased risk of drought and heat waves and delayed fire-quenching autumnal precipitation. Gone are the days of predictable fire seasons and reliable natural limitations on the size and intensity of these blazes.

The “new normal” of California wildfire season is reflected in the numbers. In 2017, wildfires burned a reported 234,000 acres across the state. 2018’s wildfire season blazes on into its historically worst months, and 613,000 acres have already gone up in smoke. To put these figures in perspective, the five-year average from 2013-2018 is just 158,000 incinerated acres. Massive, destructive wildfires, exacerbated by anthropogenic climate change, are California’s new reality. The closer we align firefighting efforts with emerging climate research, the better we can protect vulnerable communities and save lives.

Cover Photo: A helicopter silhouetted by smoke from the Mendocino Complex Fire near Ukiah, CA. By Bob Dass, taken July 27, 2017.

This editorial opinion was written by The Outdoor Journal’s Kela Fetters.