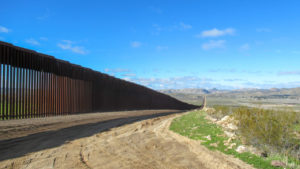 A Visit To “The Border Wall”: Here’s What I Found…

This isn't an article with a political agenda, but an observation, about how two feet separated by three rusty, old wires can drastically change your life.

As I listen to politicians, middle Americans, Democrats, Republicans, blatantly partisan news anchors, and bumper sticker flaunting owners of lifted pickups alike bicker about the severity of this problem, I begin to ask myself, “Do these people really know what they are talking about?”

I will add the disclaimer that I am not an expert on immigration policy, but I come from the perspective of someone who lives in a border community, someone who crosses the border relatively regularly, and someone who knows people well on both sides of the border. To San Diegans, this may seem like nothing special, but only 2.5% 1 of the country lives in a county that borders Mexico. The perspective of a border region resident is one that most people who are arguing the issue do not have. Simply living near the border does not warrant claims of expertise on the subject, but in my opinion it does add a level of credibility.

Only 2.5% of the country lives in a county that borders Mexico.

Before things get heated, my intention is not to write a politically slanted piece. I will gladly state that my views on immigration are the polar opposite of the standing president, but I would like to take a more objective approach to communicate the ‘issue’ at hand.

So, to see what the fuss is about and to show those that have never been to the border what it’s like, I visited and documented an unfenced portion of the border in California — just as advertised via the endless, looping B-roll on the national news.

Here’s what I found…

The difference that an arm’s length can make…

The above photo really strikes a chord with me because it demonstrates how a mere geographic distance of literally two feet separated by three rusty, old wires can drastically change your life. If you are born on that rock across the fence, you will be born Mexican, learn Spanish as your first language, and unfortunately likely face more challenges in attaining a comfortable economic situation in your life. (Of course, I say ‘likely’ because money does not necessarily mean happiness, not everyone wants to live in the USA, and not all Mexicans have financial struggles.)

If you are born where I stood, you are American, which can give you an opportunity that you may not have on that side of the fence. Also worth noting, being born on my side of the fence gives you the freedom to cross the fence as you please. Freedom of movement does not stop where the fence begins. For many born on the southern side of the border, they will never receive a visa that allows them to cross, never able to come to stand where I was.

Think about the difference that an arm’s length can make.

This leads me to a related thought (possibly a slight tangent). As with most things in life, I think patriotism is okay in moderation. But at the same time, I look at this photo and think, where you are born is pure luck. Putting aside the infinitely small chances that you were even born in the first place, you could have just as easily been born on that side of the fence. I mean hell, when you enter the world, there is a 60% chance that you will be Asian, 20% chance that you will be Chinese 2. Should we be proud of this luck?

I look at this photo and think, where you are born is pure luck.

Given the extremely small chance that I was born in California, USA, do I have an inherent responsibility to care more for those also born in my country, or can I look at every human on Earth on an equal playing field, all equally deserving of my consideration? I tend to lean towards the latter.

Again, nothing wrong with patriotism, but there’s a little food for thought to start off your day.

So… What did I learn?

I must say that I was not expecting to find much at the border, so it was mildly surprising to see such clear evidence of what has unfolded on this small chunk of land in the past two decades. The discarded items, the fence, and the worn trails tell a story. Between the plethora of water bottles, food wrappers, backpacks, clothing, and cell phones, it paints a picture of those that have undertaken the treacherous journey north.

I must admit, President Trump might be right about at least one thing: a bigger, more robust border wall would likely slow down illegal immigration into the United States to some extent, at least in the short term.

It didn’t take a rocket scientist to follow the evidence of crossings straight to where the current border wall ends. The barbed wire fence showed clear signs of crossings, whereas the steel border did not.

I must admit, President Trump might be right about at least one thing.

On the other hand, if you think that the situation at the southern border is such a crisis for Americans that it needs to divert billions of our tax dollars, that’s a different conversation. I could go over a laundry list of more urgent things that need funding more than a wall, but that’s not what I am aiming to do in this article.

And for those that are worried about all the “rapists” that are crossing the border, I challenge them to attempt to understand, or at least hear out, the other side of the issue. A good way to start is to shift your perspective to an internal problem and read up on the crimes and political meddling (yes, Russia did not invent this tactic) that our country has committed in countries such as El Salvador, Guatemala, Honduras, Nicaragua, and Panama, just to name a few. It should be no surprise that life in the United States has caught the eye of those born to underprivileged situations in these countries that were deliberately destabilized by the US.

I’ll let you draw your own conclusions.

This article first appeared on the author’s website: www.evanquarnstrom.com. All photos are by Evan Quarnstrom.