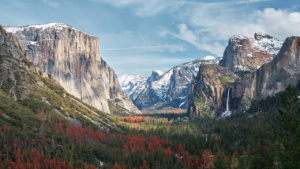 In the social media era, nature has become a commodity—hashtagged and hearted for mass consumption. But at what cost? Is our planet ultimately paying the price?

Last month, when scrolling through one of my very few social media feeds, past the usual fare of thumbs-up aphorisms and pc bromides, I came across an alarming article reposted from Forbes. The headline read “Unless It Changes, Capitalism Will Starve Humanity by 2050.” Beneath the bold black letters was a photo of a desolate and hopeless landscape—a stark contrast of anything I would normally see from accounts I follow on picture-sharing platforms.

In support of the apocalyptic foretelling, the article’s author, Drew Hansen, cited a bulleted inventory of statistics as evidence, from the exponential rate of species extinction and the millions upon millions of acres lost each year as a result of deforestation, to rising population growth, increased levels of poverty, and the continued exploitation of world resources, including an over-reliance on fossil fuels that contribute to climate change.

“Our most treasured natural landscapes become articles of mass consumption.”

None of this was news to me, generally speaking, and while I may waver to and from agreement or denial of the projected outcome, I am fairly steady on the crux of facts. I studied U.S. energy policy in graduate school, specifically the link between carbon emissions from fossil fuels and global warming, basing the majority of my research on studies conducted at the Rocky Mountain Institute in Snowmass, Colorado, and various scientific and government agencies, including the National Oceanic and Atmospheric Administration. I also knew that during the intervening two and a half decades, nothing had really changed, not substantively, except maybe the urgency of warnings. In many instances, especially among factors affecting climate change, conditions had gotten worse. Global atmospheric carbon concentrations have steadily increased, by about 15 percent during that time period, from 358 parts per million in January 1994 to 410 ppm as of the first month of this year, according to data compiled by NOOA. At the same time, economic pressures threatening once-sacrosanct public lands have only intensified.

Read next on TOJ: Three Things Everyone Can Do to Fight Climate Change Right Now

But what I did not know, or rather what I had not realized, was just how easy it is to turn a blind eye from all of it—the despairing news and dire predictions—and instead find more peaceful refuge in images that showcase vibrant wildlife and natural grandeur, like the one recently posted @planetearthtv of a blue iridescent wave curling from the Indian Ocean and crashing on the shores of Sri Lanka, or the snow-capped crown of Mount Moran reflected upside-down in the still waters of the Snake River @natgeotravel, or a baby elephant guided by the doting trunk of its mother, both of them safe from the butchery of poachers @hearthofafrica.

Photo by @michaelclarkphoto | Mt. Moran reflected in the Snake river at Oxbow Bend in Grand Teton National Park, Wyoming. This is a popular spot in the park for photography and for good reason as can be seen here. At sunrise the reflections can be phenomenal if the Snake River is calm. #grandtetonnationalpark #grandtetons

For many years, I lived in Boulder, Colorado, where access to open space and the stretches of wilderness areas just beyond the foothills are always within eyesight. A short ride up the canyon switchbacks can offer some pretty spectacular vantage points for photo opportunities. On a clear day, facing west toward the Continental Divide, vistas of wintry peaks stitch the Rocky Mountains to the horizon. Conversely, to the east over the patchwork communities spanning the Front Range, a sepia fog on most days blurs the bird’s eye view. The first scene is well-photographed, the other almost never. Yet, they are two sides of the same coin.

Cropped from the mess of reality, these selective portrayals become more like works of art than photographic realism. And like all works of art, they are an interpretation of the world, in this case an idealized and subjective version, but not true of the world in whole. Strung together and reinforced over time by subtle and subconscious increments, they form a false narrative, albeit an unintended one, whose numbing effects may be counter-productive to addressing imminent environmental issues in a measurable way.

“A preferential focus on the pristine is ineffective at addressing global environmental challenges.”

On Instagram, @NatGeo alone has more than 103 million followers who post, share and ❤ by the hundreds of thousands “breathtaking images that inspire people to care about the planet,” according to a recent statement from National Geographic Partners in celebrating its breach of the 100 million followers mark. Plainly there is an appetite, not just at National Geographic, but across many other sites and social media outlets. Strictly from the perspective of environmentalism, and even among enthusiasts who share a passion for the outdoors, has this over-whelming swell of appreciation channelled awareness into meaningful action? And if not, as Hansen’s outline of unpropitious trends indicate, then what of the appetite itself? Is it simply an idle act of consumerism, the product of economic privilege, as some social historians and environmental theorists have suggested?

In a highly influential essay presented in 1989 during a visiting lectureship at the Yale School of Forestry and Environmental Studies called “Radical American Environmentalism and Wilderness Preservation: A Third World Critique,” Indian ecologist Ramachandra Guha described a fundamental flaw within environmentalism “to equate environmental protection with the protection of wilderness,” a concept he further contended was artificial and distinctly American, borne from a unique social and environmental history.

Although Guha’s main intention was to question the validity and wholesale export of what he considered an impractical form of American-centric environmentalism to populations across other parts of the world, in the process of pressing forward his thesis he made many salient points that offer an interesting insight into the roots of our attitude toward nature, and how that perception hobbles the advancement of global environmental solutions. “Here,” wrote Guha, referencing an earlier thesis from American environmental, social and political historian Samuel P. Hays, “the enjoyment of nature is an integral part of the consumer society.”

Hays had attributed contemporary environmentalism to evolving consumer behavior, echoing similar observations from esteemed economist John Kenneth Galbraith. In an article titled “From Conservation to Environment: Environmental Politics in the United States Since World War Two,” Hays traced the history of changing patterns of consumption—beginning in the late 19th century from a concentration on basic “necessities,” i.e. housing, food and clothing; followed in the early half of the 20th century to an increasing attention on “conveniences” in the form of durable goods, such as household appliances and automobiles; and culminating finally with a focus more toward “amenities” and “luxuries” as a direct result of a rise in discretionary income and a correlative increase in leisure time—pinning them to varied new sectors associated with consumption, like the “recreation economy,” the “leisure economy” and the “environmental economy.”

“In this scenario, the environment is up-cycled.”

“One of the distinctive aspects of the history of consumption is the degree to which what once were luxuries, enjoyed by only a few, over the years became enjoyed by many,” wrote Hays. “And so it was with environmental amenities. What only a few could enjoy in the 19th century came to be mass activities in the mid-20th.”

The nettle for environmentalism within this economic framework, unfortunately, is that those areas of more enviable amenity (read: our most treasured natural landscapes), and by proxy to a degree nature itself, become articles of mass consumption, subject to the same principles and driving economic forces as any other commodity or luxury good. In this scenario, the environment is up-cycled. The more exotic, remote and rare supplants the less-desirable, commonplace and humdrum. It is a process for which social media and photo-sharing sites especially are extremely efficient. If the Grand Tetons or Yosemite’s El Capitan are the archetypal crown of American conservation (evinced by the number of times either one or both appear on the calendars of some of the most prominent environmental organizations), then what hope exists for a 100,000-acre expanse of sagebrush? How can environmentalism possibly survive that level of self-competing rigor?

Instead, Guha argued that virtually every landscape on Earth is affected in one way or another by human interaction and that a preferential focus on the pristine is ineffective at addressing global environmental challenges because it ignores the surrounding problems, such as pollution and over-population. When imposed throughout the world, he claimed, the emphasis on wilderness is actually harmful. In regions like India, for example, which shares many geographic similarities and an ecological diversity comparable to the U.S., but with a radically dissimilar cultural and social history, including most importantly a long-settled and densely populated countryside, the situation is very near the reverse when compared to circumstances in America. It would be impossible to set aside broad swaths of wilderness without displacing large groups of native people.

One of the unspoken obstacles of the environmental movement, and perpetuated in many of the images we choose to post and share and like, is the lingering mythology of the American Wild West. Notions of wide open spaces that once may have kindled the fires of Manifest Destiny or lent a special component of religious vigor to ideas of Calvinistic predestination are deeply embedded in our history and cultural psyche. It may be an outdated ideology, but it still shapes our environmental biases today. It is what John Kenneth Galbraith coined the “conventional wisdom,” the only enemy of which is the march of obsolescence.

I recently visited Williamsburg, Brooklyn, a popular New York City neighborhood known for its hipster energy and progressive attitudes, and whose majority of residents would identify, I strongly suspect, as an environmentalist, or at least supportive of environmental causes. And still, to my surprise, so much litter covered the streets and sidewalks, like nothing seen in the city since maybe the 1970s. I watched as a small girl struggled to propel a scooter against strong gusts of wind coming off the East River, her progress further hampered by an aerial assault of plastic bags, some wrapping around her front wheels, while her parents remained either unaware or indifferent. I wondered, what makes this environment—the East River, or for that matter, the Bronx River, near where I live now—less enviable than, say, the Snake River in Wyoming? Or is it the edict of our conventional wisdom that directs us to accept a set of values that would rank one above the other?

“Familiarity may breed contempt in some areas of human behavior,” Galbraith wrote in the opening pages of his groundbreaking book, The Affluent Society, a cornerstone for understanding the sway of cultural attitudes on economic policy, “but in the field of social ideas it is the touchstone of acceptability.”

Without negating the large body of science that unanimously agrees preservation of wilderness and wildlife is essential to biological health, nor the value of the imagery to inspire its appreciation, the war for environmental well-being will be won in battles that not only strive to protect what we have but also restore what we have lost. Otherwise, it is hard to see how a preoccupation with one-sided points of view and accepted half-truths will prepare us for whatever 2050 will bring.

India’s premier trail runner dreams up new mountaineering speed ascents in his home of Manali. No one in the entire country has even attempted something like this.