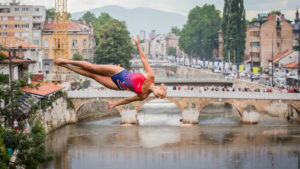 It’s official, Rhiannan Iffland is the greatest living female cliff diver on the planet. Minutes ago, she soared from atop the world-famous Mostar Bridge in Bosnia and Herzegovina and landed over 21 meters below with a perfect score.

Undefeated in 2019, Rhiannan has won all seven stops on the Red Bull World Series this year, from El Nido, Palawan to the final stop in Bilbao, Spain. Although today’s competition was the second to last stop on tour, Rhiannan seized her grip on the King Kahekili trophy, her fourth in a row, with an even 1,000 points accumulated over each stop.

“To finish on four tens, I’m still pinching myself,” Rhiannan shared in her post-dive interview with Red Bull.

With her first win at Mostar today, a UNESCO heritage site, Rhiannan can now claim dominance at every stop on tour.

Since entering her first Red Bull competition as a wild card in 2016, Rhiannan has been an absolute force. With this win, Rhiannan proved that she can perform when the pressure is on as well as when she’s earned a victory lap.

Read Next on TOJ: Film Review: Extreme Cliff Diving in The Outback

“That wasn’t really running through my mind, the overall series win, but to finish it at the penultimate stop is really special. I came in here this weekend knowing that I’d have to be extra mentally strong and that was my game plan, to dive like I have been diving the rest of the year.”

Even though the first place trophy is all but locked up in her trophy case back home in Newcastle, New South Wales, Rhiannan still has a chance to attain the perfect season with another win at Bilbao on September 14th.

“Halfway through, I started to think about a clean sweep, an undefeated year and that’s now the goal, especially after coming here and achieving this. I think it’s looking pretty good so I’m going to train really hard in the upcoming weeks to Bilbao.”

If you’d like to learn more about Rhiannan’s proud heritage as a native Australian, check out her Rainbow Dive documentary set in the outback.

To follow along with the career and training of such a dominant champion, check out Rhiannan’s social media.