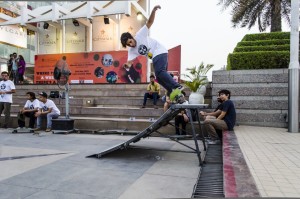 The urban activity of skateboarding is in its nascent stage in India but the youth are getting hooked really fast.

Here’s what two pioneers of skateboarding in India have to say about the sport.

Ever since you were a kid you had glimpses of something cool that you really wanted to try to do. You saw it on TV sometimes, maybe in a movie, and definitely on a video game.  You might have even convinced your parents to buy you that one essential thing that you hoped would fulfil that hunger for adventure, thrill, independence and the seeming instant coolness of a rock star – A skateboard.

Till recently there has probably been thousands of disillusioned youth who made a good effort at skateboarding in a part of the world where you couldn’t buy a decent skateboard… but those days have come to an end. Skateboarding has now taken root in India, and although it is still only the first generation of the sport (if you want to call it that) small fires have been set all over the country and show no signs of ever dying out.

So, now that it is possible, what does it take to become a skateboarder? First of all, let me say that skateboarding is for anybody who wants to embrace it. Once you try it you will know if it is something you want to become a part of or not.

Assuming you are still tracking with me, I’ll give you some advice to help you get rolling.

In order to skate it would be best to have a decent board. You can find boards if you really want by doing a little bit of searching on the internet to find where to buy one. Once you have a board that will work, you also need some to get some skate shoes. There are many brands of skate shoes, some that have reached India, but the basic shoe that works is flat on the bottom without too much tread. Next, you need a smooth, flat surface to figure out how to ride.

The first thing we do in helping someone learn is to figure out if they ride regular foot, or goofy foot. Left foot forward is called regular, right foot forward is goofy.  90% of the time you will immediately know…if not, then just pick one way and go for it.

On a skateboard you have to be standing right over it. Leaning too much one way or the other will result in seeing the world from a different perspective that you normally avoid, and might also result in some pain. Although it isn’t preferred, falling is a normal part of skateboarding so get used to it. Before long you will learn how to fall and not get hurt…skateboarding will teach you this.

Once you start spending a significant part of your daily life either skateboarding or wishing you could go skateboarding, and then you have moved past the point of curious interest to actually becoming a skateboarder. You’ll notice little things that will start to change in how you dress, how you carry yourself, how you see the world around you. Finally, you will think… “Why did I wait so long?” but be glad you finally found it. It’s all about having fun and enjoying people and the world around you in an active, living way.

Skateboarding, like many other extreme sports, is not a rocket science. Although it does get technical as one proceeds. But that’s for a later stage. First, go get a basic skateboard and it doesn’t mean the one from the nearest toy store. One can get a basic Oxelo skateboard at any of the Decathlon outlets for about INR 3,000 but they will last you only for a little while as they come with unbranded trucks and cheap bearings.

Next step is to find some concrete. This could be the local market, apartment basement, or even a beach front promenade not really intended for skateboarding. But if one is seriously looking at improving skills, well-manicured skatepark is the place.

A skateboarder doesn’t go with the flow, they create the flow shredding the ground and soaring in the air, balance and agility being the prime strengths.

Most skateparks come with a compulsory helmet rule but it is also a good idea to pad up at the wrists, elbows and knees for a simple reason – less injuries equals more skate time.

Flexibility is very important to be a skateboarder. When skating, one is moving their feet and legs in a rhythm that gives the board the right swagger on surface. Using the arms to help balance and persuade the body to move forward in every action. All these things must happen simultaneously, giving the body a variety of movements. It involves a lot of coordination between the eyes, legs, feet and arms. The more one skates, the better he/she will get at this.

Most skateboarders skate for hours a day which helps their physical endurance levels up. Depending on the intensity of the skate, the average person is estimated to burn between 150­-1500 calories per hour.

Skateboarding helps one learn to be confident to do something and take risk. Sometimes the fear of a fall fogs the idea of taking risks. An athlete repents missing out on a chance to test. But sometimes over confidence is also bad which are realized after some really bad falls. Then one actually knows their limits and that distraction is a villain in skateboarding. One also increases their concentration power.

It’s one of the best modes of transport for short distances. It’s non-polluting and whenever one gets tired, he/she can carry the board. On the way, one can find some curbs, ledges or stairs where one can pull out some small tricks and have fun. When one skates, it gives a sense of freedom to roll on the wheels because there is no restriction or rules in skateboarding.

In skateboarding the first lesson is: How to fall? Prevention of future injuries is one of the most beneficial things that skateboarding teaches you. When you skate, you learn how to bail.

Skateboarding can be done at various places even if one doesn’t have a devoted skatepark. Places like an abandoned building, full-pipe warehouse, parks, walkways, etc can make a good spots to roll the skateboards.

Whenever one falls, it’s very important to lean forward and fall with bent knees which will easily help to roll on the ground. Distribute the force to the wrists, arms, shoulders and back.

Falling on only one part of the body is very dangerous because it might break as the whole force is going to fall on that particular bone. So when one learns how to bail, then they would get over slips, trips and stumbles.

By Amit Subba from HolyStoked, Bangalore

Few skateparks in India to visit: