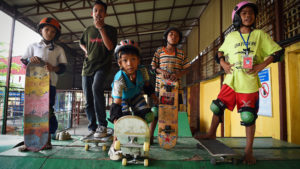 Skateistan: How Skateboarding is Changing the Story for Kids in Need

Over my entire adult life, I’ve read about Afghanistan in the news, but only in the most general, blanket terms, as a place where soldiers go to fight. I’m ashamed to say that I’ve never taken a moment to think about what life is like for children growing up there, let alone what I could possibly do to help. What kind of hardships and challenges do kids, especially young girls, face on a daily basis?

In Afghanistan today, many women don’t hold jobs, they don’t drive or ride bicycles – these are all activities deemed just for men. More often than not, young girls cannot go to school because it’s not safe to commute there from their homes. Instead, they are forced to work on the street.

However, Skateistan is Changing that Story by building an inclusive educational infrastructure, and it all started with one man and his three skateboards on the streets of Kabul in 2007. (Listen to the full conversation with Skateistan’s Jessica Faulkner here).

Skateistan is an award-winning international non-profit organization that provides a unique blend of skateboarding instruction and educational programs to empower children to change the trajectory of their lives and their communities. Donate today and you can help to change these children’s stories, too.

Taliban control in Afghanistan all but decimated the educational system. More than half of Skateistan’s students were working in the streets or living in temporary camps after fleeing conflict in their home provinces. Skateistan launched its Back-to-School program to help these children, many of whom had never written their own name before, to enroll in the public school system.

Although Skateistan originated with one skate school in Kabul, Afghanistan, over the past decade, it has expanded to Phnom Penh, Cambodia, and Johannesburg, South Africa. Over 2,500 children attend Skateistan’s programs, and 50% of all students are girls.

Worldwide, only 5% of skateboarders are girls, but in Afghanistan, 50% of all skateboarders are girls, making it the largest female sport in the country. That’s the Skateistan difference. Through its Skate and Create program, which started over a decade ago, local children could attend weekly skateboarding instruction apace with an educational curriculum where they learned about topics such as human rights, cultural studies, nutrition, and the environment. Over time, each registered student started spending an equal amount of time learning in the classroom as on a skateboard, with some children sitting in a classroom for the first time in their lives.

Skateboarding builds life skills like self-confidence and perseverance. Through skateboarding, falling is a part of the process, so students experience firsthand that falling isn’t failing, it’s learning. They learn how to pick themselves back up and try again. In addition, the community aspects of skateboarding unite people from different socioeconomic backgrounds, ethnicities, and beliefs – like a universal, physical language.

The Citizens of Skateistan is a global community of students, staff, skaters, and supporters who share the dream of empowering and educating youth through skateboarding. By donating $10 or more a month you become a Citizen and help make it possible for thousands of youth to attend Skateistan programs worldwide.

ONE MAN AND HIS BOARD

Skateistan began as an idea when Australian skateboarder and researcher Oliver Percovich arrived in Kabul, Afghanistan in 2007, carrying with him three skateboards and an open spirit. He noticed that although 70% of the country was under the age of 25 due to war-times, little was being done to bolster the education of the country’s youth. Oliver began running local skate sessions, gathering sponsors, and dedicating himself full-time to creating the first international development initiative to combine skateboarding with educational outcomes.

By 2009, Skateistan opened its first indoor facility – a safe space for children to learn to skate – complete with classrooms and an office. The skate school, Afghanistan’s first skatepark and its largest indoor sports facility, was built on land donated by the Afghanistan National Olympic Committee. Skateistan launched a suite of programs for children aged 5 to 17 with a focus on girls, children living with a disability, and children from low-income backgrounds. Later that year, Skateistan was presented with the ‘NGO of the Year’ award at the Peace and Sport Forum in Monaco.

With skateboarding legend Tony Hawk on its Global Advisory Board, Skateistan could not have a better ally to help carry out its vision. Skateistan is also represented by the youngest star in the skateboarding world, 10-year-old phenom Sky Brown. Sky showed off her skills at the skate school launch in Phnom Penh, Cambodia. As an ambassador, Sky helped design a board with Almost Skateboards, and a portion of all proceeds go directly to Skateistan.org. To date, Sky has helped raise $20,000.

You can order Sky’s board here.

In our next installment, The Outdoor Journal speaks with Jessica Faulkner, the Communications Manager at Skateistan’s Berlin headquarters, about her role within the organization, how Skateistan builds strong relationships within communities despite cultural differences, designing gender inclusive programs to encourage young girls to skate, developing classroom programs to focus on life skills like resilience and determination, and the best way that readers can get involved and become a Citizen of Skateistan themselves.